» News and Features » The Top Festivals To Attend In May

Gagging for a music festival? Can't wait until summer? Same here. But don't worry, May is packed with some beautiful fests we can't wait for.

Most would say festival season kicks off around June/July time. Some might say even later. But if you’re anything like us, waiting that long is simply not an option. For what feels like forever, we’ve been dying for a cracking music festival. We can’t wait any longer. And besides, the festivals in May 2022 look too good to be true…

Straight off the bat, you have the living legend Richard Ashcroft, Kaiser Chiefs, the band that’ll have everyone singing along to that massive chorus for Ruby, and Clean Bandit to sprinkle some sunshine into your day. There are lots of activities for the littluns, such as tipi building, magic, and workshops, and there’s a good variety of genres across three stages, all in the gorgeous Williamson Park.

With such a cracking lineup, it’s no surprise that tickets are flying away. If you want to be one of the lucky people in the crowd when those breathtakingly beautiful strings of Bittersweet Symphony ring through the air, secure your tickets now to avoid disappointment. Oh, and kids ten and under go free!

The award-winning family-friendly festival, Bearded Theory, will return to Derbyshire in May with another killer lineup. This year will see alt-rock band Placebo, punk poet Patti Smith, psychedelic rock band The Flaming Lips, and The Hives, a band that was born to perform. There's a hangout spot for teens where they can learn graffiti and have a crack at DJing, and there'll be a kid's area with arts and crafts sessions.

Bank holidays are made for drum and bass, garage, house, hip hop, and dance… and a few pints. And you can have all that and more on the 1st of May in Cardiff’s Bute Park, where thousands will be going mad for some filthy tunes. You can already imagine the scenes as Kurupt FM rowdily bounce onto the stage - pints fly through the air, the crowd roars, and the set is electric. We’ll see you there.

Find tickets for Inside Out - here 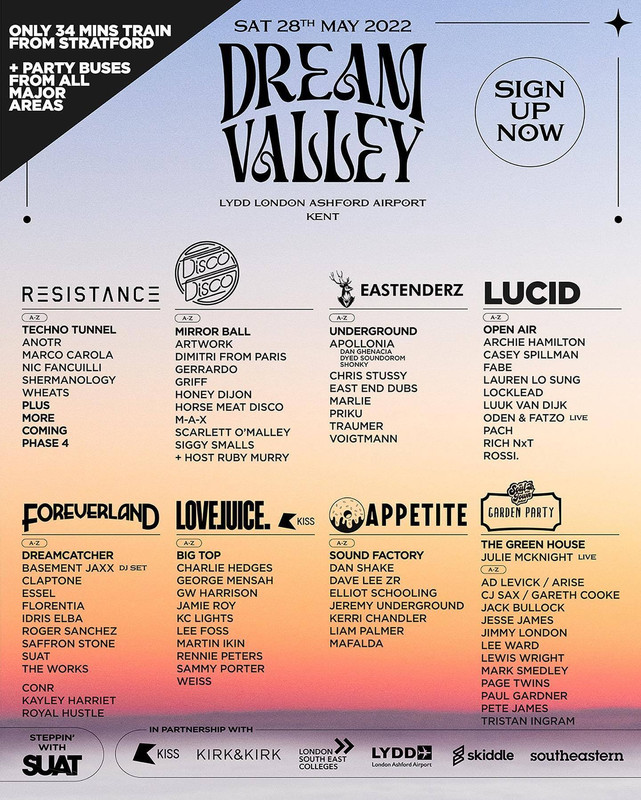 When: Saturday 28th May

There’s not much that Dream Valley Festival doesn't have. There’s a roller disco, wellness workshops, immersive art, an outdoor cinema, and one hundred artists performing across seven stages. With all that on, we’ll be amazed if any of the thousands attending end up feeling bored. And with performances from Honey Dijon, Basement Jaxx, and other amazing live acts, it’ll be a hard one to top.

Could May be the perfect time for a cheeky getaway? Organised by the team behind the massively famous EXIT Festival in Serbia, Sea Star will be going down in Stella Maris, a stunning seaside resort in Croatia. Expect world-class performances from the biggest names in techno, house, trap, bass, reggae and beyond. Some stages will even be on top of a stunning lagoon, the perfect location for such a summery festival.

Another one for the ravers, Dundee Dance Event, or DDE, will be tearing up multiple venues in Scotland this May. DDE is the biggest multi-venue dance event in the UK, with 200 DJs and artists spread across 28 different venues. Antics start at 2 pm and rage on until 3:30 am, so prepare yourself for a mad one. Around 10,000 people will attend looking to unwind and lose themselves in the best in house, techno, and trance music right now.

When: Saturday 28th May

Dot To Dot is a little festival with a huge reputation. This award-winning day festival features both established and exciting new acts across multiple venues in Bristol, a city with a vibrant music scene. Recognised by many as the UK’s top festival for discovering new talent, DTD is perfect for any music fan. Past editions have seen many artists perform before their rise to fame, including The 1975, Wolf Alice, Jake Bugg, The xx, Florence + The Machine, and Caribou.

This year marks Liverpool Sound City’s 15th birthday! And to celebrate, they’ve secured some cracking artists that are sure to make any indie kid giddy. With two massive headliners and other top acts including Tim Burgess and Mae Muller, LSC 2022 will be a corker. Another multi-venue festival, LSC allows you to discover your new favourite artists and venues while also checking out the acts you know and love. It’s a no brainer.

What started originally as a party for friends has snowballed into one of Scotland’s best electronic music parties. This year is looking crazy with Peggy Gou, Horse Meat Disco, and Ewan McVicar among the top DJs set to perform. And it’ll all go down in Hopetoun, a beautiful green space on the outskirts of Edinburgh with a massive castle-like house and, when FLY comes around, some gigantic, booming speakers that ripple the bass through your chest.

What better place for a fest than Brighton? It’s got one of the most vibrant music scenes in the UK right now. But with a lineup like that, we don’t need any convincing. Just imagine Solardo blasting XTC through huge, bassy speakers as thousands sing and dance their hearts out around you with the sun beating down on you. The condensation from your pint drips down your hand, you take a sip, then the beat drops hard. Heaven.

If indie music’s your bag, you’ll love Neighbourhood Weekender in Victoria Park just outside of Manchester. NBHD has some of the indie scene's biggest names, such as Kasabian, the band that closed Glastonbury back in 2014 with smash hits such as Fire, Underdog, and Club Foot. Indie veterans Courteeners will also be headlining, and you can expect performances from Blossoms, DMA’s, Becky Hill and more. NBHD is a pretty big deal and with a lineup like that, we doubt tickets will last long.

When: Friday 27th May

Where: Night & Day, The Castle Hotel, and Gullivers, Manchester, England

Meltchester Vol #1 is a festival split between three iconic venues in Manchester - Night & Day, The Castle Hotel and Gullivers. Each venue has a different vibe, with Night & Day being the post-punk stage, Gullivers for psych, and The Castle Hotel for garage rock. The festival is brought to us by Sour Grapes Records, a label known for putting on some of the best underground gigs in the North West. There are twelve up and coming bands to check out, and at such amazing venues, it’s guaranteed to be a top day out.

To be honest with you, compiling this list was bloody difficult. There are bucket loads of May festivals that look absolutely unreal. If none of these fests seem right for you, have a look at our complete list of festivals here.

No matter what festival you decide on, we recommend snagging tickets ASAP. After so long staying indoors, we’re all dying to get back out, meaning tickets for most events are flying away. We’ll see you on the dancefloor!

The Best Foods To Take To A Festival