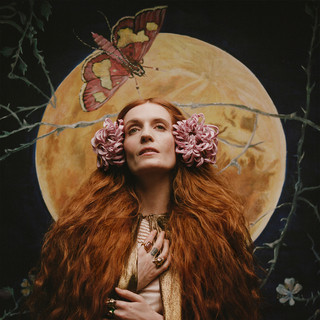 Florence + the Machine formed in 2007 in London, England, United Kingdom. The band is the recording name of singer/songwriter Florence Welch and a collaboration of other artists who provide backing music for her. The current lineup of the band is Florence Welch (vocals), Robert Ackroyd (guitar), Isabella Summers (keyboards), Tom Monger (harp), Mark Saunders (bass), Christopher Lloyd Hayden (drums). Florence is an art-college dropout from Camberwell, London, who was discovered singing Motown covers in a nightclub toilet, drunk. Musically Florence and the Machine's sound is generally referred to as soul inspired indie rock. Welch, who grew up listening to The White Stripes and Kate Bush, says she writes metaphorical songs that are "stories with consequences and weird morality issues," She gets her material from a variety of sources and experiences. Florence And The Machine's music has received praise across the British music media, especially from the BBC who have played a large part in their rise to prominence by bringing them into the spotlight as part of BBC Introducing. At the Brit Awards 2009 Florence picked up the Critics Choice Award; a category introduced in 2008 focusing on new talent, voted for by a panel of music industry experts. The current line-up of the band consists of Robert Ackroyd (guitar), Christopher Lloyd Hayden (drums), Isabella Summers (keyboards) and Tom Monger (harp). Debut album, 'Lungs', was released in July 2009, preceded by third single, 'Rabbit Heart (Raise It Up)'. Lungs also went on to become number one in the UK album charts in January 2010. Florence won the mastercard Album at the Brits award 2010 where she also performed a hugely popular collaboration, 'You've Got the Dirtee Love' with Dizzee Rascal. This was a mix between Florence's popular 'You've Got the Love' and Dizzee's 'Dirty Cash'. The second album Ceremonials' was released on 31 October 2011 by Island Records. The Shake It Out Songfacts reports the album title was inspired by a video art piece called 'Ceremonials.' The word 'ceremonies' got stuck in her head and it went with the album which was influenced by hymns and poems and sounds of church bells. User-contributed text is available under the Creative Commons By-SA License and may also be available under the GNU FDL.

Florence + the Machine has been mentioned in our news coverage

Below is a sample playlists for Florence + the Machine taken from spotify.

Do you promote/manage Florence + the Machine? Login to our free Promotion Centre to update these details.