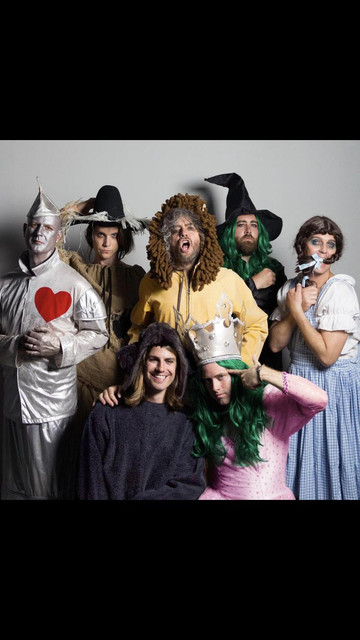 The Flaming Lips are an American neo-psychedelic band, formed in Oklahoma City, Oklahoma, United States in 1983. Throughout their career, band members have come and gone, but currently The Flaming Lips consist of original members Wayne Coyne (lead vocals, guitar, keyboards) and Michael Ivins (bass, keyboards, backing vocals), along with members Steven Drozd (drums, guitar, keyboards, backing vocals), Kliph Scurlock (drums) and Derek Brown (guitar, keyboards, backing vocals). Former members include Mark Coyne (lead vocals), Richard English (drums, keyboards, backing vocals), Nathan Roberts (drums), Jonathan Donahue (guitar, backing vocals), who went on to form Mercury Rev, and Ronald Jones (guitar, backing vocals). The Flaming Lips are known for their lush, multi-layered arrangements, spacey lyrics and bizarre song titles. They are also acclaimed for their elaborate live shows, which typically feature animal suits, puppets, streamers, video projections and complex stage light configurations. In 2002, Q magazine named The Flaming Lips one of the "50 Bands to See Before You Die". In 2006, Oklahoma City named a street Flaming Lips Alley in their honor. The group recorded several albums and EPs for Restless Records in the 1980s and early 1990s. After signing to Warner Brothers, they scored a #9 hit on the Billboard Alternative charts (and #55 on Billboard's Hot 100 chart) in 1994 with "She Don't Use Jelly". Although it would be their only hit single, the band has maintained critical respect and, to a lesser extent, commercial viability with sonically majestic albums such as 1995's Clouds Taste Metallic, 1999's The Soft Bulletin, 2002's Yoshimi Battles The Pink Robots and 2006's At War With The Mystics. The Flaming Lips' 12th studio album, Embryonic, was released in October of 2009. A complete cover of Pink Floyd's The Dark Side of the Moon was released in May 2010. The Flaming Lips And Heady Fwends, their collaborative album which features artists like Ke$ha, Bon Iver, Nick Cave and Erykah Badu, was released on Record Store Day, April 2012. Their next studio album, tentatively titled The Terror, will be released in January 2013. Their song "Do You Realize??" is the official State Rock Song of Oklahoma. www.flaminglips.com User-contributed text is available under the Creative Commons By-SA License and may also be available under the GNU FDL.

The Flaming Lips has been mentioned in our news coverage

Below is a sample playlists for The Flaming Lips taken from spotify.

Do you promote/manage The Flaming Lips? Login to our free Promotion Centre to update these details.