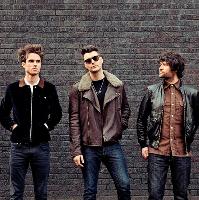 Hailing from Manchester and featuring an outspoken frontman, Liam Fray, with a penchant for both talking up his own positive attributes and getting into verbal scraps with other bands, the Courteeners received regular comparisons in the U.K. press to the leading lights of three previous waves of Manc Brit-pop: the Smiths, the Stone Roses, and Oasis.

The band's alternately jangly and bombastic brand of indie guitar rock bears the influence of all three acts, as well as comparisons to contemporaries like Arctic Monkeys and Kasabian. Also featuring lead guitarist Daniel Conan Moores, bassist Mark Cupello, and drummer Michael Campbell, the Courteeners formed in Manchester in 2006, when the 22-year-old Fray -- already known around town for his acoustic singer/songwriter gigs -- brought three of his childhood friends together to form a proper band.

St. Jude After signing to Loog Records, a pseudo-indie label owned by Polydor, the Courteeners released their limited-edition debut single, "Cavorting," in August 2007. Three more singles, "Acrylic," "What Took You So Long?," and "Not Nineteen Forever," dotted the charts between October 2007 and March 2008, prior to the release of the band's debut album. Produced by Stephen Street (celebrated for his work with the Smiths, Blur, and the Cranberries) and featuring Fray's painting of Audrey Hepburn on the cover, St. Jude was released in April 2008.

The album reached number four in the U.K., where it also achieved gold status. While touring in support of the record, the Courteeners began playing new material at select shows, much of which found its way onto 2010's Falcon, a slower, more ambitious set of songs. The group's third album, Anna, reflected an '80s synth pop influence and arrived in early 2013. In 2014, the Courteeners returned with their fourth studio album, Concrete Love, which found them building upon Anna's anthemic '80s-influenced sound. The album fared well, reaching number three on the U.K. Albums Chart.

Courteeners has been mentioned in our news coverage

Here are the latest Courteeners mixes uploaded to Soundcloud.

Do you promote/manage Courteeners? Login to our free Promotion Centre to update these details.