Over 35,000 of you partied with us this year and we are absolutely delighted to be returning to the beautiful Williamson Park from 12th - 14th May 2022 with Richard Ashcroft headlining Thursday with Friday & Saturday headliners being announced soon.

Our visitors have reviewed Highest Point Festival 1516 times. Read reviews of this festival » 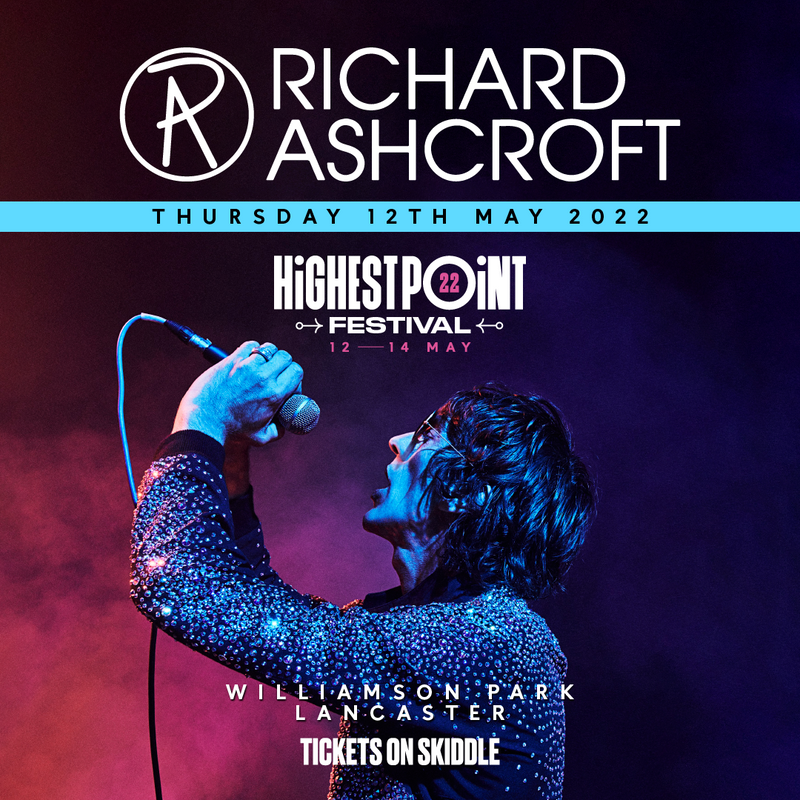 Richard Ashcroft announced as Thursday's headliner with more to be announced soon...

Friday & Saturday: To Be Announced

Skiddle guarantee that we have the lowest booking fees available for Highest Point Festival tickets. We are an official primary ticket outlet and all tickets are processed and dispatched by Skiddle direct to you. All our tickets are sold at face value and originate directly from the event organiser.

How much are Highest Point tickets?

Ticket Prices start at £104.50 for an adult two day ticket, for entry on Friday and Saturday of the event. Teen and kids tickets are also available at a cheaper rate.

Yes Payment Plan tickets will be available so you can spread the cost of your ticket over multiple smaller payments. You can find more information about Payment Plans in due course

Your RapidScan tickets will be available via your Skiddle account or confirmation email. Head to www.skiddle.com/orders or the 'my tickets' section within the app, for quick easy access.

What happens if I bought a ticket and cannot attend?

Unfortunately we can’t issue you with a refund if you can’t make the event due to work commitments or your mates have dropped out. In these circumstances, we advise passing on your tickets privately to avoid losing out on the money spent.

Highest Point returns to Williamson Park from Thursday 12th to Saturday 14th May 2022.

Where is Highest Point?

Highest Point is located in Williamson Park, Lancaster. It takes about 5 minutes from the town centre by bus, or car. The postcode is LA1 3EA.

What time does Highest Point start?

Friday 13th May gates will open at 2pm. Last entry is 7pm.

Saturday 14th May gates will open at 12pm. Last entry is 7pm.

Does Highest Point have onsite camping?

No, Highest Point is a non-camping festival so camping equipment is not needed. However, there is plenty of alternative accommodation to choose from in Lancaster.

Does Highest Point have any age restrictions?

As Highest Point is a family festival there isn’t an age restriction. 17 year olds and under will need to be accompanied by an adult (18 or over). You may be asked to show photo ID.

Can I leave and re-enter the festival?

Yes, but you must be back before the last entry time!

What are the set times?

Make sure to follow Highest Point Festival on Facebook, as the exact timings are confirmed via social media much closer to the time of the festival.

Can I bring my own food and drink into Highest Point?

You are not allowed to bring your own food and drink into Highest Point. There will be a wide variety of food and drink stalls inside the festival, serving up organic, vegetarian and vegan options.

Highest Point will be operating an improved cashless system for bars and food vendors this year. Simply load your wristband with credit (via Cash or Card) at the various topup stations in the park, then spend by simply tapping your wristband at the trader. The buying process is much quicker, reducing queues and ensuring you get fed and watered quicker!

How do I get to Highest Point?

By Coach - You can travel direct to the festival, with our coach partner National Express, from Bradford, Burnley, Leeds, Liverpool, Manchester, Preston, Sheffield and Warrington. Book direct at National Express.

By Car - You can reach Williamson Park via Junction 34 of the M6. There will be designated parking close to the festival site, car park location will be confirmed in due course. As the festival is in a residential area, road closures will be in place.

By Rail - Lancaster is the closest rail station and is approximately a 10 minute taxi ride or 30 minute walk.

By Taxi - Yes, there is a taxi rank at Lancaster station. We  encourage you to share  taxis with fellow festival goers where possible.

By Bus - Stagecoach run regular bus services to and from the festival site, confirmations of routes will be shared prior to the festival.

Highest Point Festival was set up in 2018 as a tribute to Chris Glaba, who started A Wing alongside Richard Dyer and Jamie Scahill as well as working at Skiddle. Unfortunately, Chris lost his short battle with cancer 2016.

Since A Wing started in 2014, an annual music festival at Williamson Park was always in the team's sights. With the passing of Chris, who was integral in the A Wing and Hacienda Classical events, it became even more of a goal to make it happen. The Chris Glaba Memorial Stage has been named in his honour.

Highest Point's ultimate goal is to create a legacy music festival, to join all of the other amazing events that happen in the city, that the people of Lancaster can be proud of.

Jess Bays interview: "Expect nothing but fun vibes with me"