Are you looking for a particularly picturesque festival to go to this year? Well, look no further as here we've assembled the best forest festivals of 2023.

There's just something special about a forest festival, isn't there? You manoeuvre yourself through a natural woodland labyrinth as strobe lights peek out between the cracks as if some kind of UFO has landed nearby. The enclosed space of a forest can make a festival seem communal and intimate.

With wacky stages, some of the biggest names in both dance and popular music, and crowds that are always up for it, these forest festivals are a vital cog in the Uk festival calendar, as the vibes they emit are second to none. Plus, with the vast woodlands we are blessed with in this country, you're never too far away from one.

They are places of complete escape where you can forget about any worries of the daily grind or any kind of responsibility. So here we have compiled a list of the best forest festivals that will provide you with that much-needed getaway in 2023. 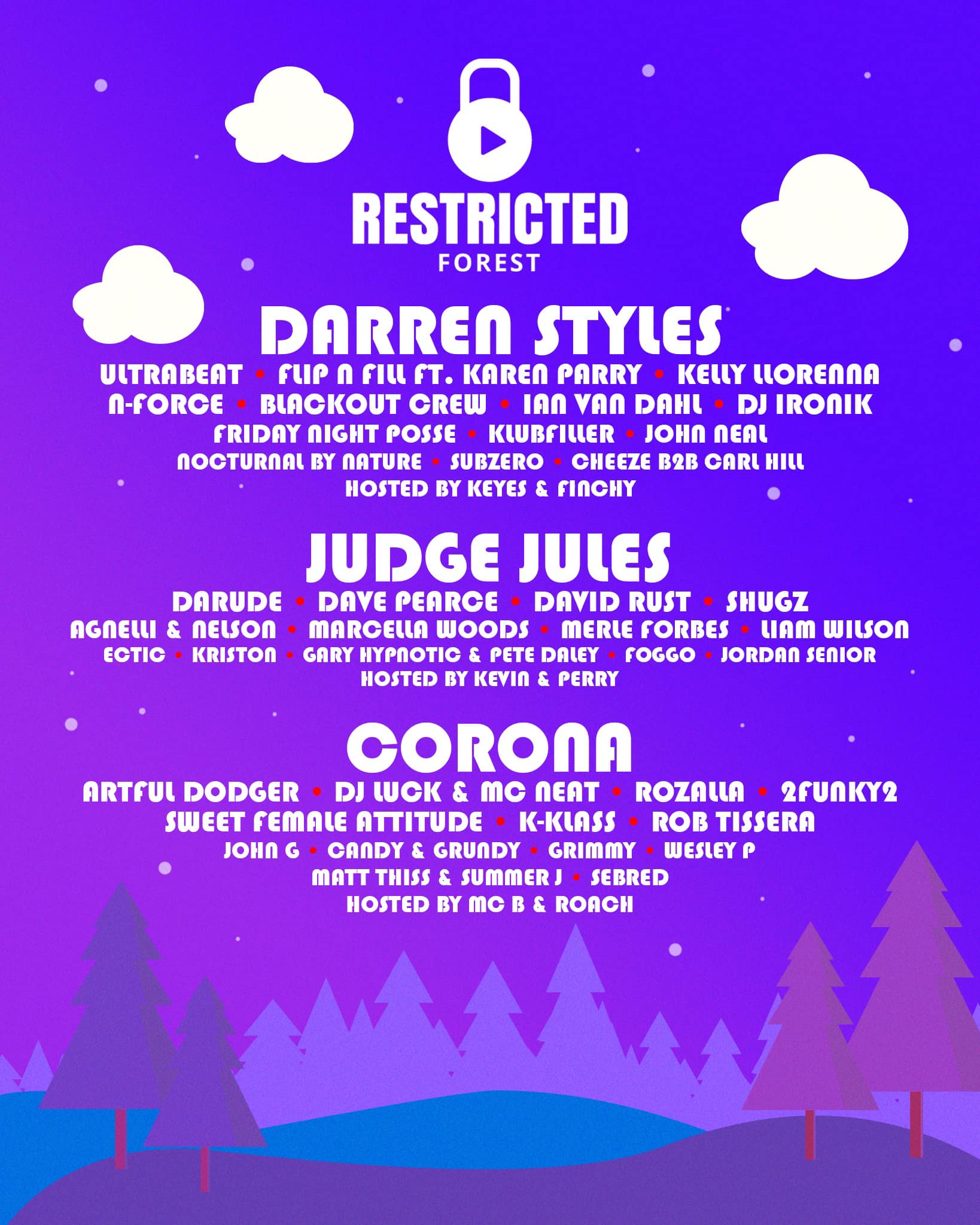 Restricted Forest Festival is here to deliver what we all need from time to time - a good old-fashioned rave-up. With music from the realms of house, techno and old school, this fest offers exactly what any raver could want in a secluded forest location.

There's a lot of mystery surrounding the event but the forest itself is its own mystery. It's said that our ancestors were banned after becoming too addicted to the secret of the forest. Now it has been unlocked again for our everlasting enjoyment.

The 2023 edition is absolutely stacked with a mix of classic rave groovers and some up-and-coming talent thrown in for good measure. With names like The Artful Dodger, Corona, Darude and Ultra Beat peppering the lineup, its clear that this is going to be a secluded forest rave of seismic proportions.

So grab your ticket, stick on your wellies, and get your gun fingers out because it’s gonna be a mad one. 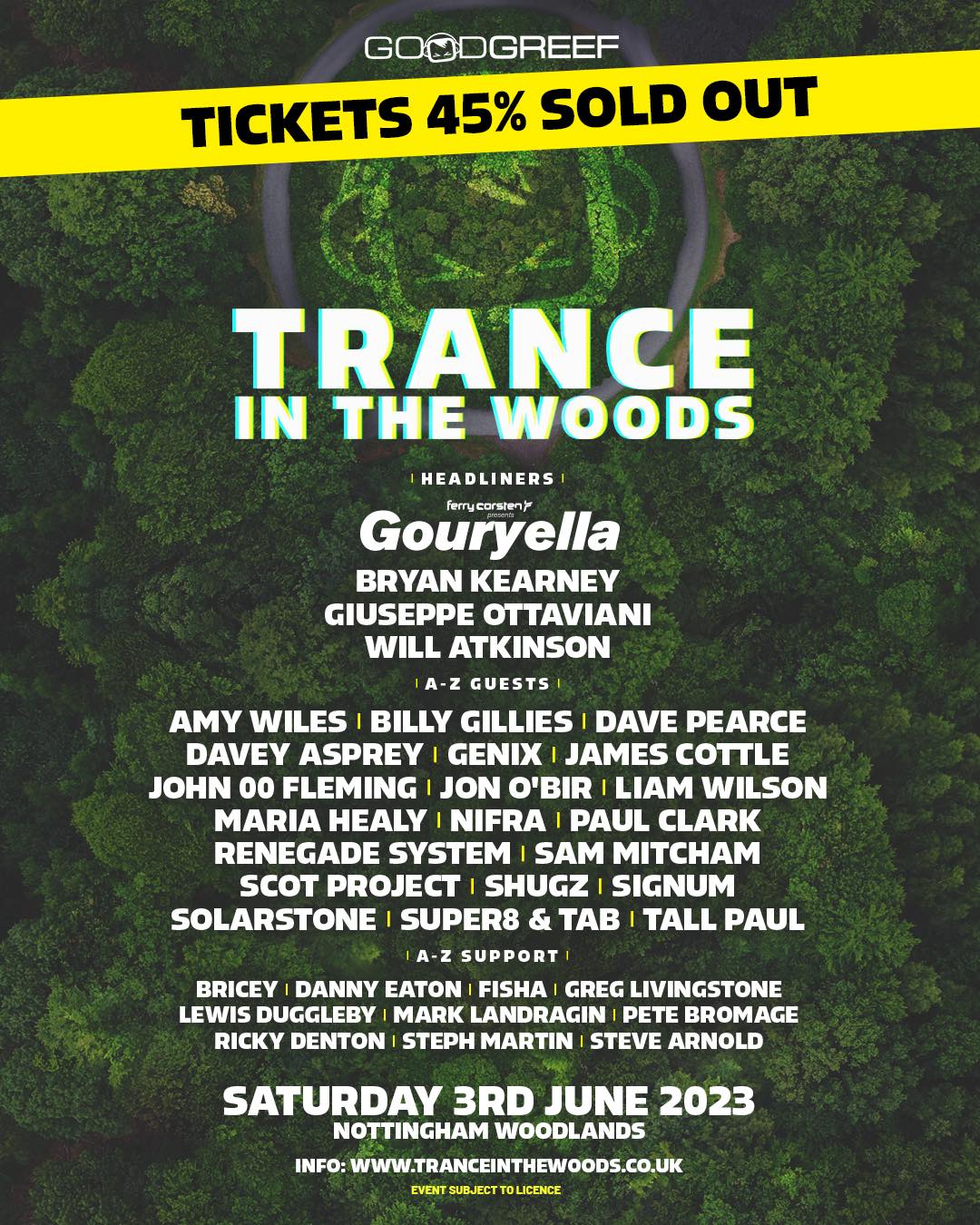 The team behind the UK's leading trance and dance brand Goodgreef have announced this absolute corker of a festival, the UK’s first fully dedicated trance music event in the woods, aptly named - Trance In The Woods. The event takes place on Saturday 3rd June 2023 in the Woodlands in the heart of Derbyshire, featuring three stages of music with over 35 artists performing throughout the day and into the night.

Not only this, but if you're a fan of trance, the lineup is a stellar one to say the least - featuring the likes of Bryan Kearney, Giuseppe Ottaviani and Will Atkinson, and a rare UK headlining set from the legendary Ferry Corsten’s alias project ‘Gouryella’. You'll be in a transcendent headspace for the entire day.

Get those tickets and head on down to this brand-new event, which looks set to become a staple on the dance festival calendar.

Tickets for Goodgreef presents Trance In The Woods festival 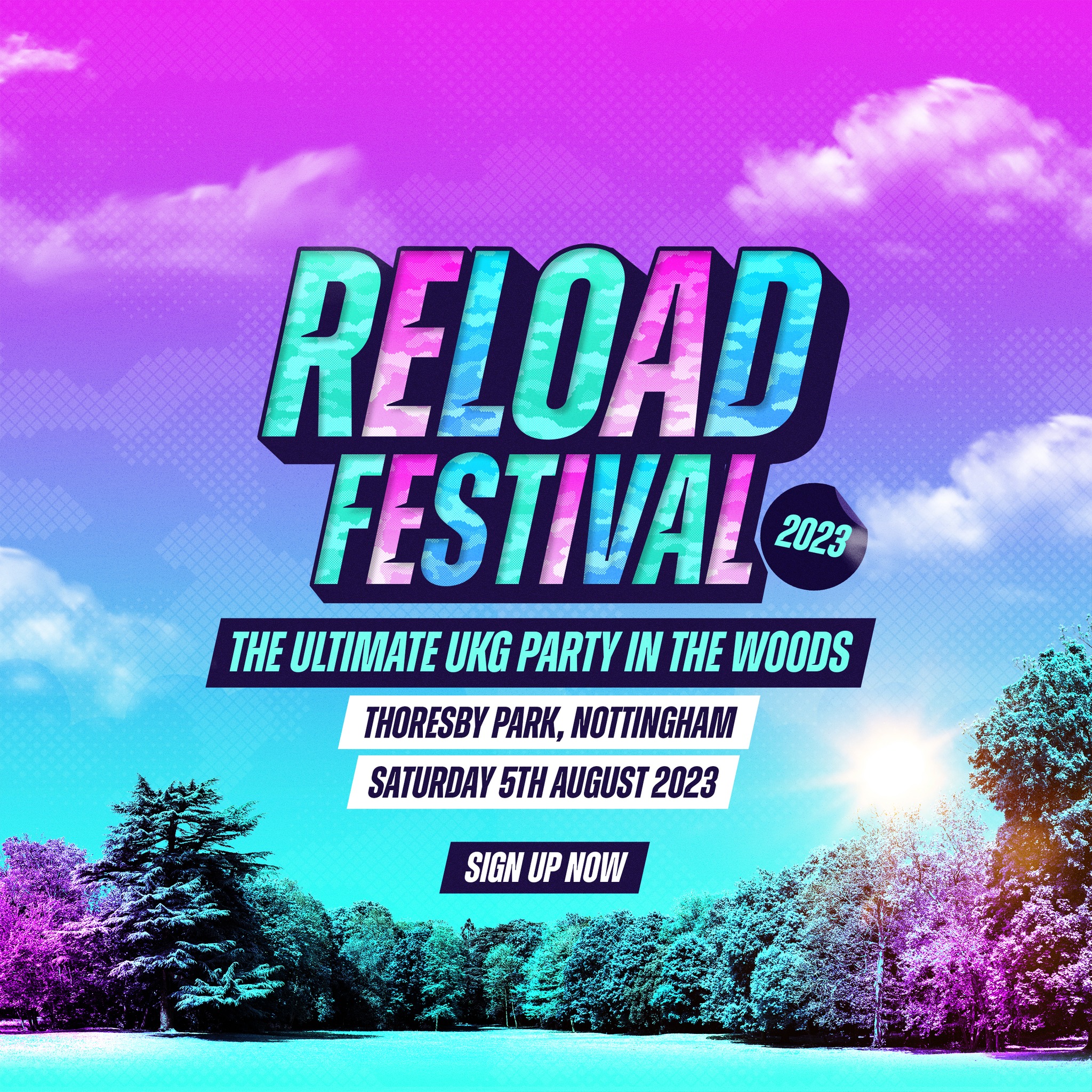 Where: Thoresby Park in Nottingham

For one day only, Reload Festival will be bringing the biggest UKG line-up around straight to Thoresby Park for their, loyal, crazy, up-for-it audience. Will you be in the crowd?

Nothing beats a forest festival. Escaping the hustle and bustle of the city to immerse yourself in the deep bass, shuffling drums, and soft vocals of UKG with others who also want to let go and feel the music is an unbeatable experience. And it’s finally coming to Nottingham.

It’s about time! If letting loose in a forest to your favourite jams sounds right up your street, grab your Reload Festival tickets now to avoid disappointment.

Tickets for Reload Festival 2023 - UKG In The Woods 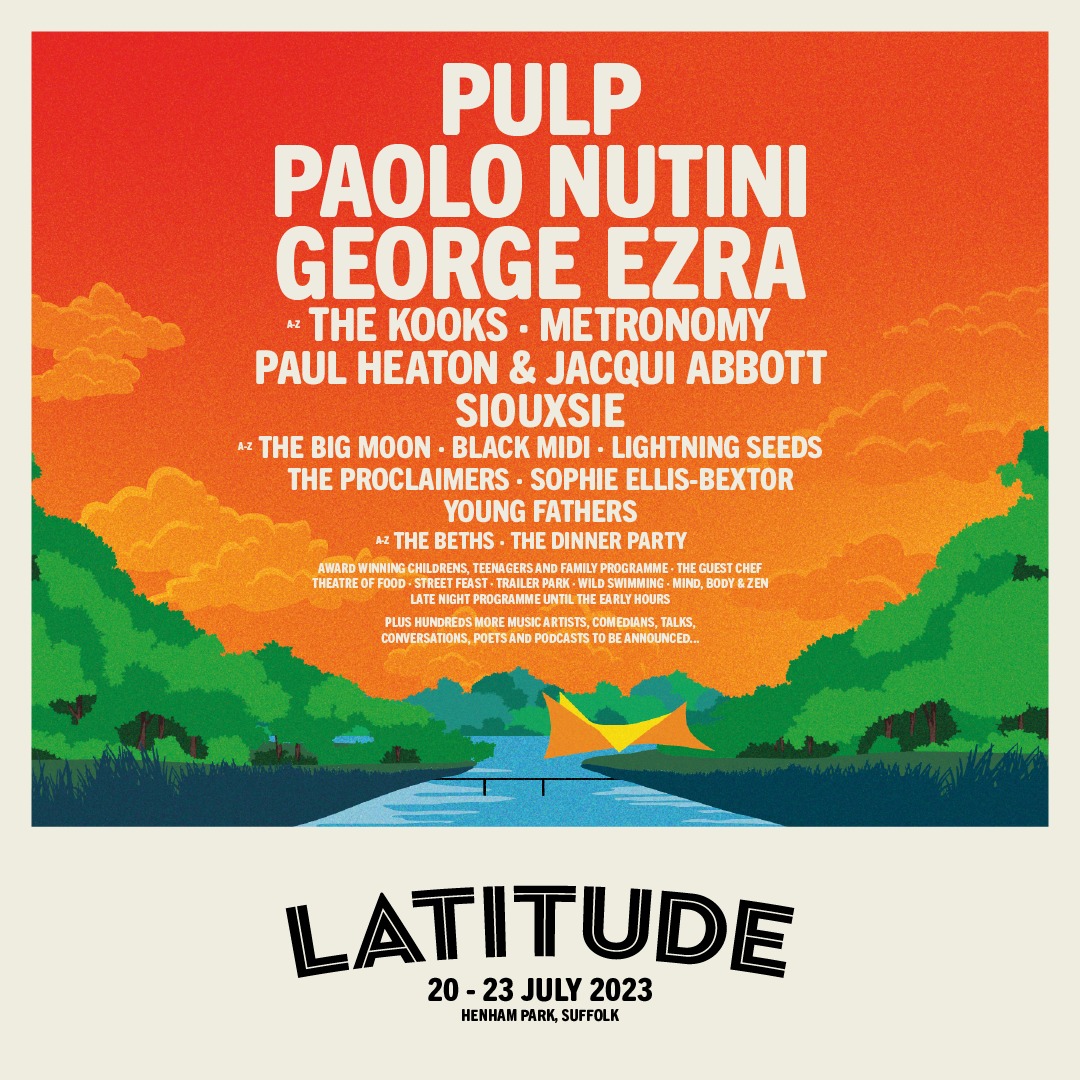 One of the most impressive parts of Latitude Festival is the scale of the forest around it, enclosing and peering above all the tents below. A festival that's dedicated to greenery, Latitude has environmentally friendly initiatives such as bicycle hire, zero waste campsites and water refills.

Of course, no forest festival would be complete without stages dedicated to the scenery around it. And so, at Latitude, you will find six right in the heart of the forest and separate areas dedicated to theatre, art installations and more.

Plus, it's got an absolutely killer lineup. Returning Britpop icons Pulp are headlining one day, with the other two slots owned by Scottish Indie Soul darling Paolo Nutini, and pop icon George Ezra, plus elsewhere you'll get to see the likes of The Kooks, Metronomy, Paul Heaton & Jacqui Abbott, Black Midi tear up whatever stage they grace.

We'll see you in the woods for this one! 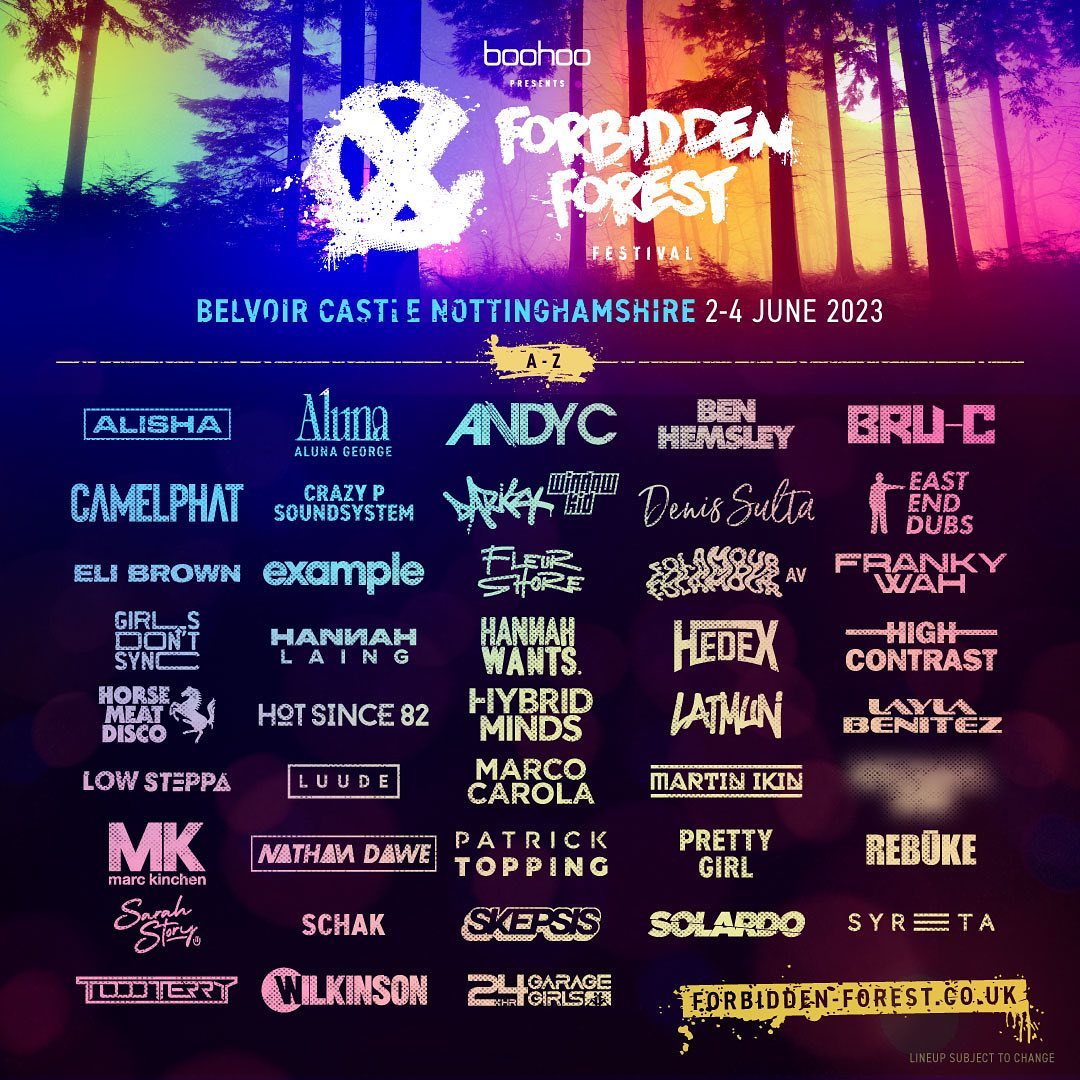 Where: Belvoir Castle in Nottinghamshire

Forbidden Forest was born out of a love for dance music and clubbing, with the organisers wanting to move away from the restricting spaces of clubs and warehouses. So, they took their fest to the forest for a weekend of nothing but bangers, raving and cracking memories.

With intense performances and 12 hours of ensuing hedonism, prepare for the festival canopy to be lit up by lights of all colours, intensities and shapes. This year's lineup looks set to be one of the absolute best, with some of the biggest names in the biz heading into the trees. The likes of Andy C, Ben Helmsley, Camelphat, Folamour, Hot Since 82, High Contrast, Patrick Topping, Skepsis, and Wilkinson will all be spinning tunes, and there are still names to be announced! We only have the first phase of artists, and they’ve already knocked it out of the park. 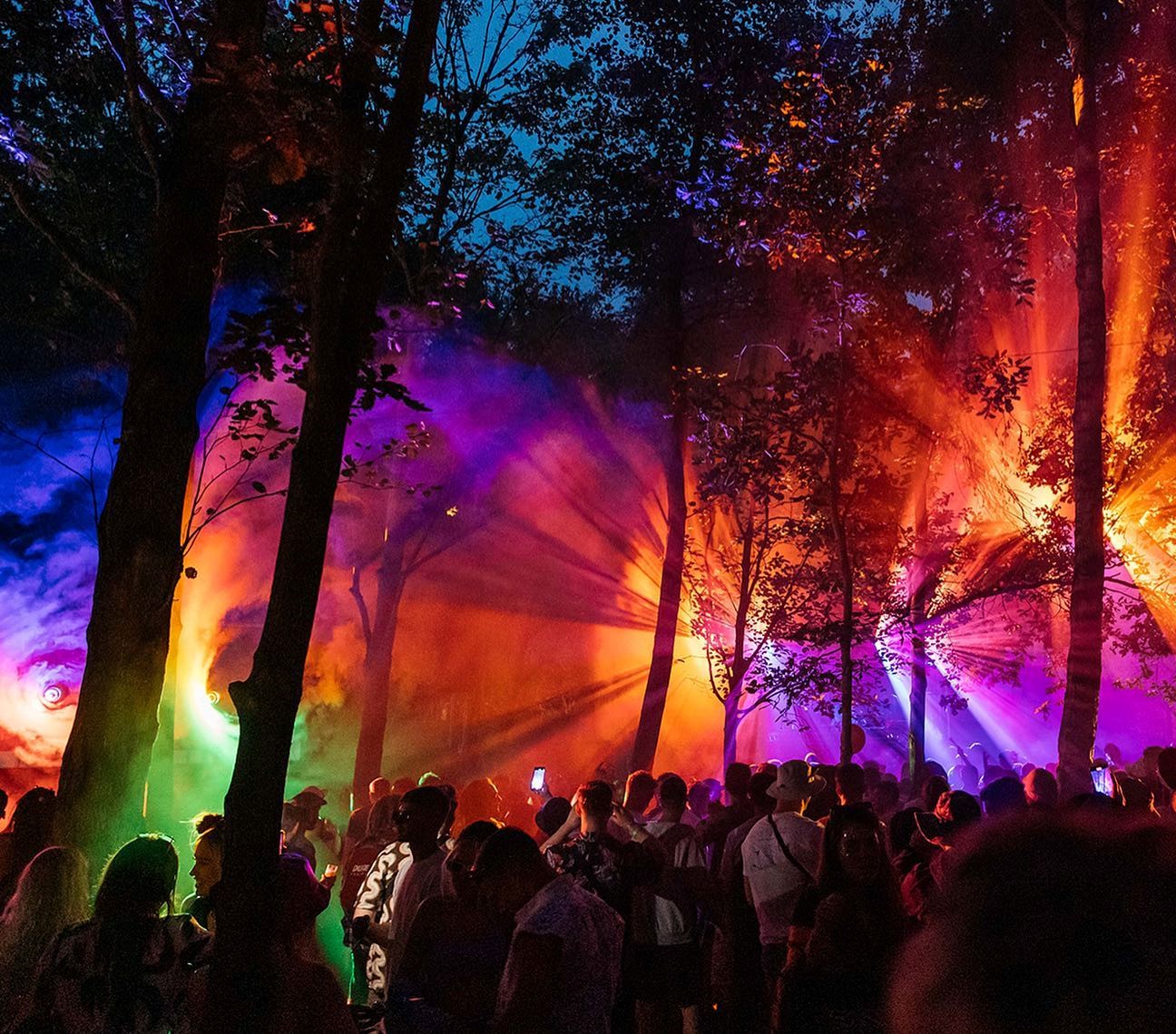 Where: Lost Village in Lincoln

Lost Village takes place in an abandoned woodland village. Sounds kind of creepy, right? This couldn't be further from the truth. Lost Village is the place to be for all things house, techno, disco and dance. The trees provide the perfect cover as you step into this hidden land and discover a new world full of mystery and wonder.

A thoroughly immersive and ethereal experience from start to finish, this unique festival invites around 18,000 passionate ravers to escape the aches and pains of everyday life by immersing themselves in the forest and the tunes.

Feel free to explore the village, taking in the sounds of the abandoned chapel, check out the global street food at Basecamp and take a relaxing trip to the Lake of Tranquillity. Lost Village's mystery premise is an alluring prospect and no trip is ever the same. 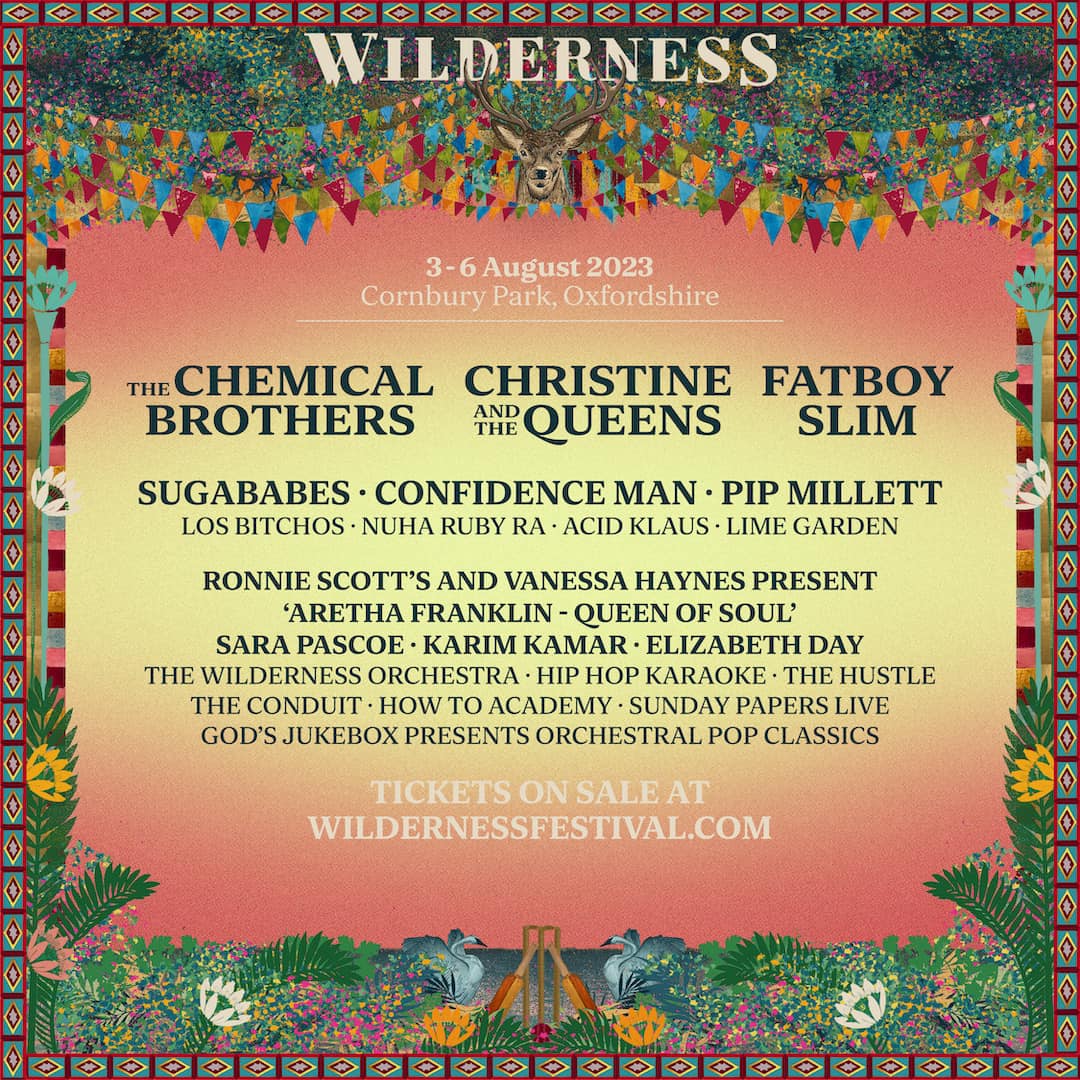 Where: Cornbury Park in Oxfordshire

Wilderness Festival is framed within the wonderful splendour of Cornbury Park in Oxfordshire. Created by the team behind Lovebox and Secret Garden Party, this festival is an ode to diverse creativity. Artists from indie, funk, soul and dance all emerge here for a party within the meadows, and if you really feel like it, you can even dive into the lake.

With the lineup just released, this year's edition looks ready and primed to be one of the best yet. With two huge dance icons in The Chemical Brothers and Fatboy Slim, alongside the ever-incredible Christine and the Queens, you just know it's going to be top. Plus, elsewhere on the bill, the likes of Sugababes, Confidence Man, Pip Millet, Los Bitchos and Lime Garden, will provide a cacophony of diverse tunes that'll please every taste.

As well as banging music, there are plenty of other activities to get stuck into. Last year had disco yoga, tai chi, qi gong, massages, theatre, and talks and debates. We can’t wait!

The One In The Woods 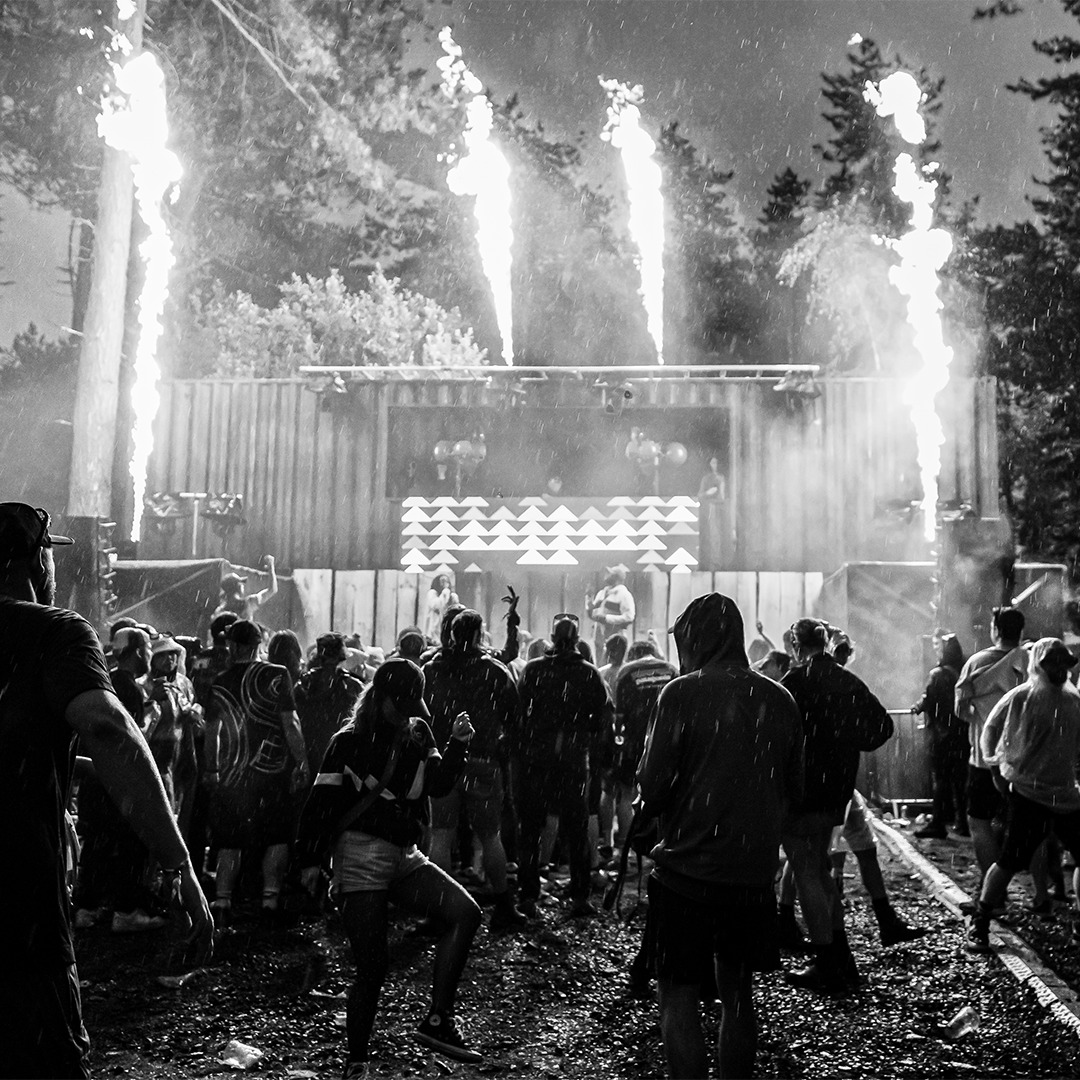 Where: Orrell Hill Woods in Liverpool

Last year, punters saw sets from huge artists such as Pendulum and Camo + Krooked, as well as sets from smaller artists including SPFDJ, Dogger & Mindstate, Kenny Ken and many more.

After a hugely successful event last year, we know this year will only be better. So whack on your bucket hat and secure your ticket before they sell out!

Find more information on The One In The Woods 2023 - here 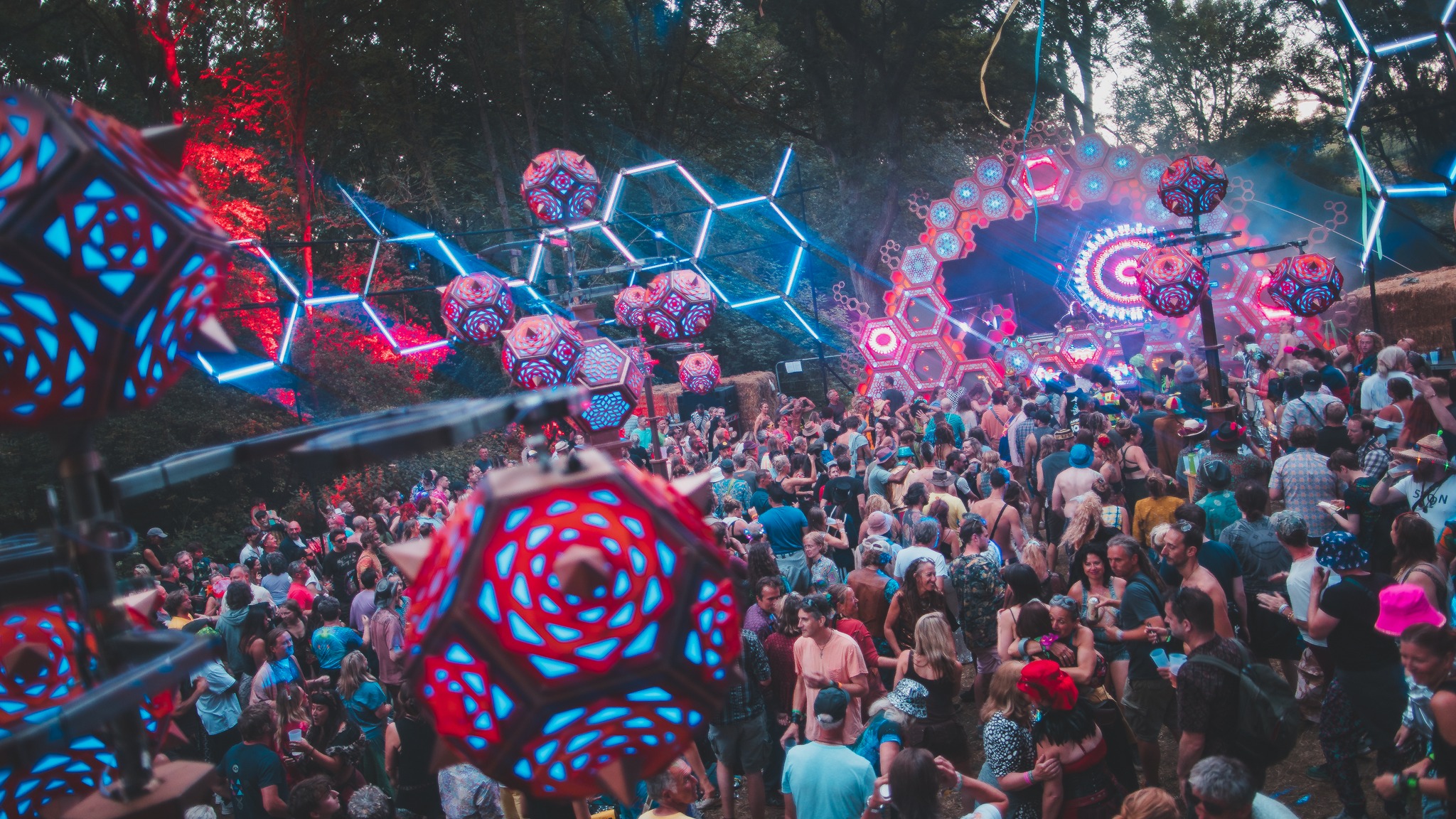 Where: Coney Woods in Leicestershire

Noisily Festival has a strong ethos that reflects its surroundings of Coney Woods. They have five pillars of Inclusion: the environment, wellness, education, community and creativity. With 6,000 people entering this festival, it creates a close-knit community of shared beliefs.

As well as music, the festival focuses on three key subjects - mind, body and soul. Over four days, festival-goers will dive into the topics in workshops, healing practices and talks. The idea is to heal yourself and the planet we call home. It's the perfect event to reconnect with yourself, heal, make friends, find like-minded people, and of course, enjoy some banging tunes.

The lineup hasn’t been released yet but already we can see some great acts will be accompanying you on your spiritual journey at Noisily. To complement the whole hippy vibe, the fest has a distinctively psychedelic feel in its lighting arrangements, transforming the woods into another world. If you’ve always wanted to check out a trippy forest rave, you know what to do…

Forest festivals are on another level. If music takes you to another planet, experiencing live music in a secluded forest takes you to another universe. We all deserve to completely let go from time to time, and that’s exactly what hiking out to the middle of nowhere and raving to some sick tunes does.

Have these forest festival recommendations woken up the adventurer in you? Well, if you're looking for more amazing festivals that are going down this year, then check out our festival finder here.