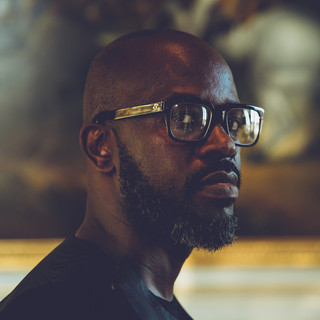 Considering his meteoric rise to fame, it would be easy to stereotype Black Coffee as just another black diamond, a BEE beat magnet out to mine the insatiable upwardly mobile urban house-party market. But as he proved on his South African Music Award-winning album Home Brewed, this DJ and producer defies convention.

If one heard a clamour and ululating emanating from the eastern provinces of South Africa, Kwazula Natal and the Eastern Cape, announcing the recognition of a cultural phenomenon……and their role in the development of this cultural phenomenon…one could not argue were that clamour and ululating to be in respect of one……that is the soul, spirit, talent and vision of Nkosinathi Innocent Maphumulo, one who most know as “Black Coffee”.

Black Coffee was born in Durban in KwaZulu Natal and grew up in the Eastern Cape in Mthatha, before moving back to Durban to study music at Natal Tech where he majored in Jazz. His reason for studying music was because he felt that as a producer, he had to deepen his overall musical knowledge, develop his listening skills and advance his knowledge of music theory. Leaving Tech prior to completion of his studies, Black Coffee with two friends Thandukwazi “Demor” Sikhosana and Mnqobi “Shota” Mdabe worked as backup vocalists for the renowned Madala Kunene. Deciding then to form an urban soul trio “Shana” the three moved to Johannesburg to make their way.

Keeping ‘Simply hot and naturally African’ (the meaning of ‘Shana’) together as an ongoing project, the three have also pursued their individual visions, collaborating on the way.

Black Coffee was chosen as one of two South African participants in the Red Bull Music Academy in 2003 jump-starting him into the South African DJ scene – a decision he says he has never looked back. His first big break was when his song “Happiness” was featured on the DJs at Work album.

Black Coffee has been mentioned in our news coverage

Here are the latest Black Coffee mixes uploaded to Soundcloud.

Do you promote/manage Black Coffee? Login to our free Promotion Centre to update these details.