Discover an array of newly announced club nights, gigs and festivals, now on sale with Skiddle

Oi! You there! Yes, you! Stop whatever it is you are doing. This week's New On Skiddle is here and ready to give you - the gig-going, dancefloor dwelling, music-loving population - ten reasons to get excited about the coming weeks and months.

Rescuing you from the clutches of the most dreaded day of the working week, today's feature includes a handful of eye-popping events taking place across the UK this year, with performances courtesy of internationally renowned artists the likes of Denis Sulta, Nightmares On Wax, Folamour and many more.

Why not brighten up your Monday and bag yourself a ticket to one of the latest parties listed on Skiddle, below... 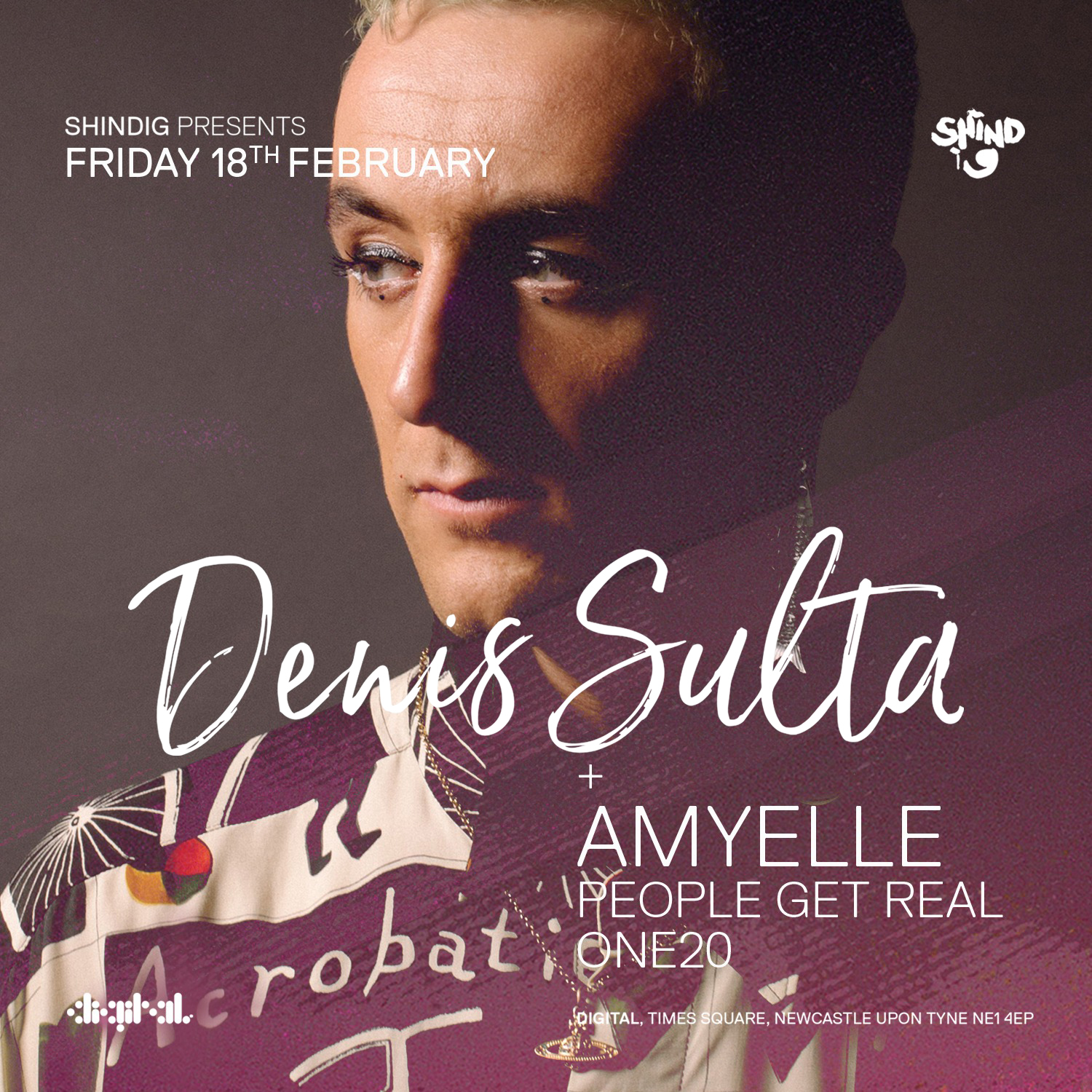 Where: Digital in Newcastle Upon Tyne

Glaswegian superstar, Denis Sulta joins the Shindig crew this February for what's set to be a raucous affair in the North East of England.

Scheduled for an appearance at Newcastle nightclub, Digital, the twenty-eight-year-old producer and selector, real name Hector Barbour, has been tearing up dance floors across the world since his breakthrough back in 2016. Now a familiar face on the global dance music scene, he's become well-known for his animated live performances and his own take on melodic house, receiving support from some of the biggest DJs in the world - from Four Tet to Bicep and Peggy Gou.

Catch him doing what he does best alongside Amyelle, People Get Real and One20 in just a few weeks time. 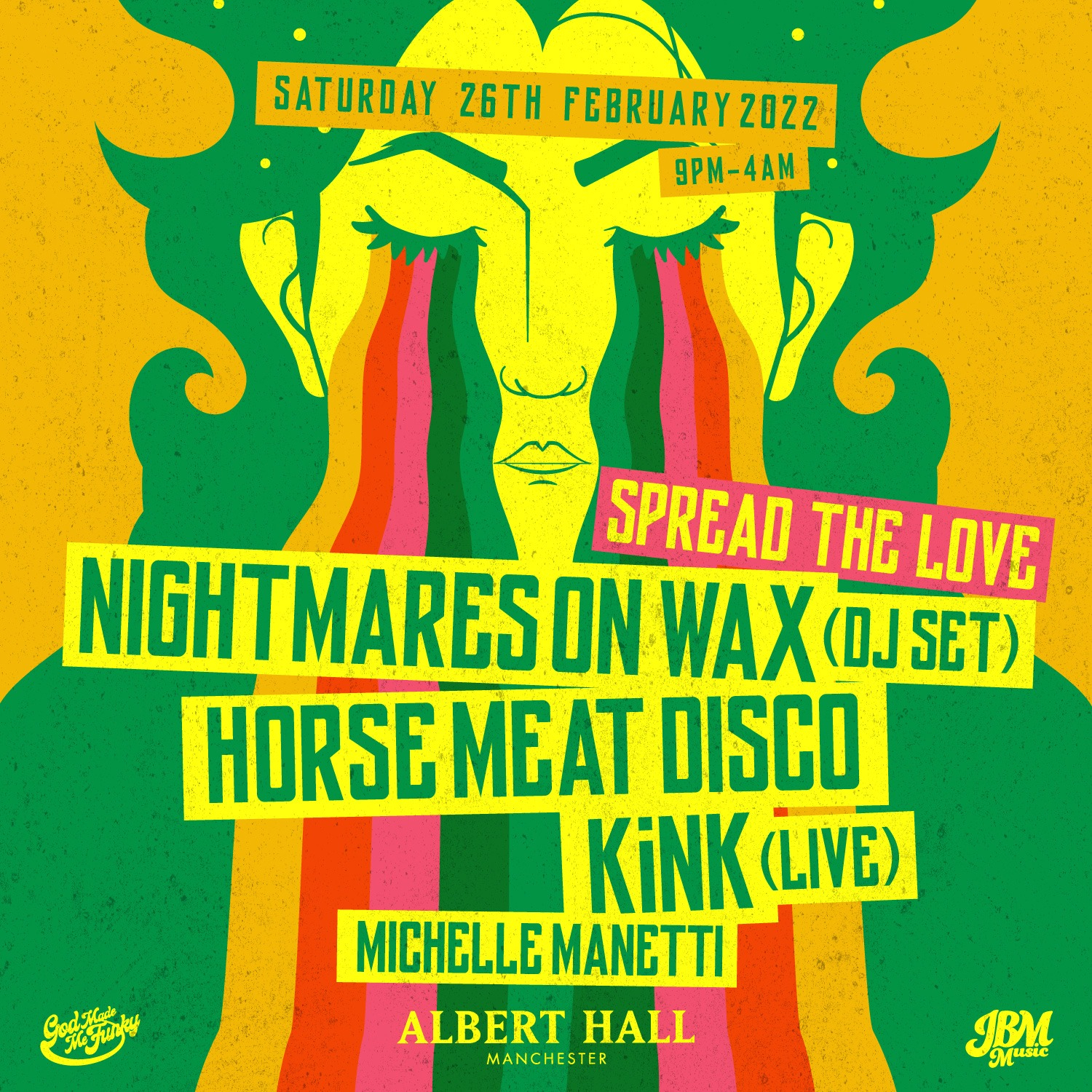 One for the disco fanatics out there - This shimmering dance music spectacular at Manchester city-centre venue, the Albert Hall will see legendary, game-changing names of disco, house and more spinning an unparalleled soundtrack of body-moving anthems.

On the lineup, punters who act fast to secure their tickets can expect to see sets from Ibiza-based soul selector, Nightmares On Wax, as well as performances from sought-after DJ collective, Horse Meat Disco, Bulgarian experimentalist, KiNK and multi-disciplined artist, Michelle Manetti.

Disco shenanigans and good vibrations aplenty. Don't miss out on your chance to party alongside like-minded groovers on Saturday 26th February.

Where: Witton Country Park in Blackburn

Blackburn's first and only tribute festival, Restricted Rocks returns to the sprawling grounds of Lancashire's Witton Country Park for another weekend of indie and rock anthems from the 80s, 90s, noughties and more.

The unmissable spring-time event, taking place over the early May Bank Holiday weekend, will see live impersonators the likes of MeatLoud, Not The Rolling Stones, Foo Fighterz and Green Haze performing timeless classics such as 'I Would Do Anything For Love', 'Paint It Black', 'Everlong' and 'Basket Case'.

A family-friendly event, Restricted Rocks will also feature entertainment for the youngsters, including child-friendly fairground rides, circus acts and face painting stalls, whilst those eighteen years and over can take full advantage of a stocked and licensed bar. 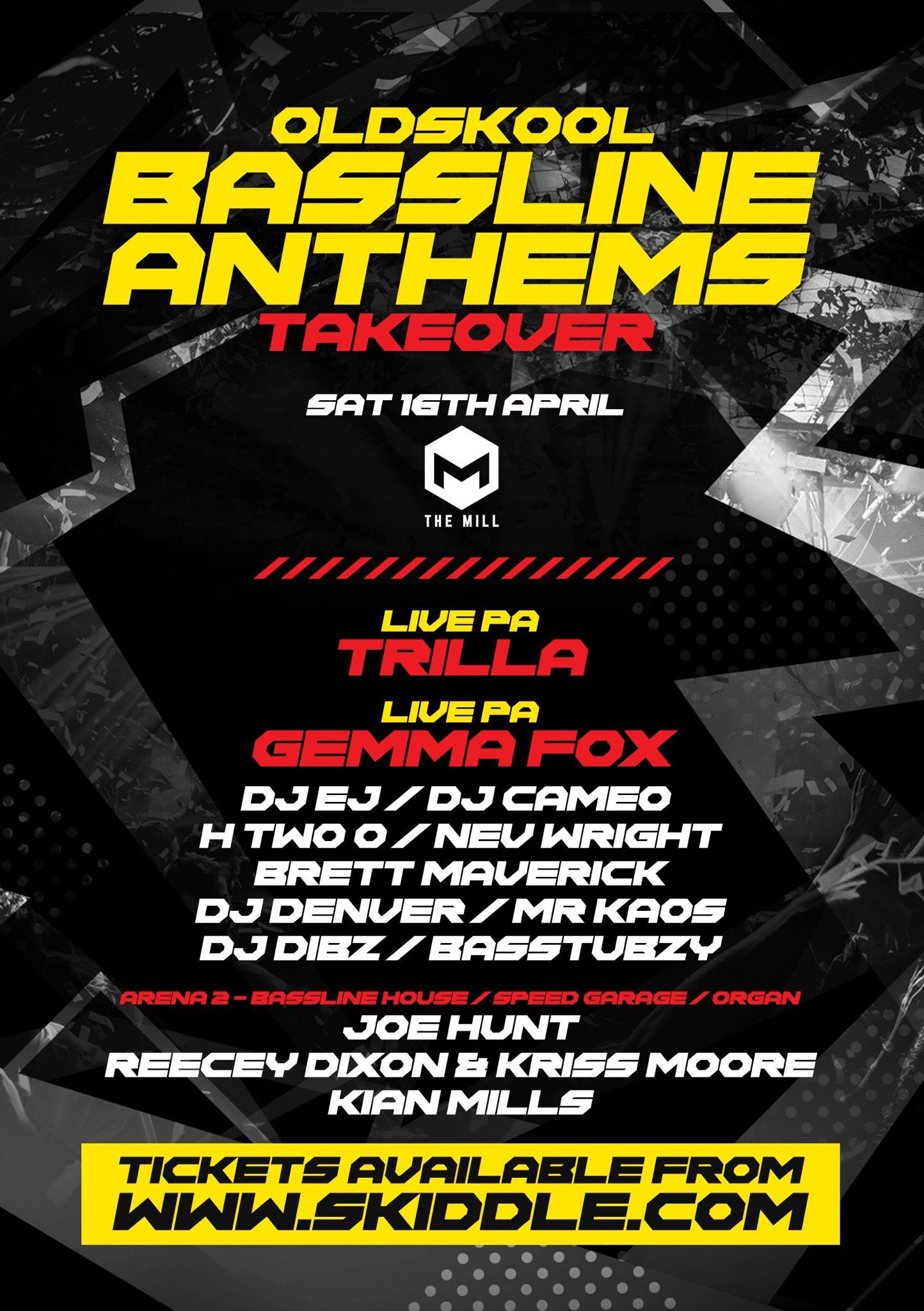 Two thousand oldskool bassline fans will descend on Birmingham live music venue and nightclub, The Mill Digbeth on Saturday 16th April, for a special celebration harking back to the glory days of the genre.

There'll be confetti canons, a glitter station, a VIP area for those looking for that exclusive experience and a cash prize given to the best mover on the night. There's also said to be a HUGE headline act, still yet to be announced. Keep your eyes peeled for more details.

One of Scotland's longest-running club nights, Colours Glasgow marks an impressive twenty-seven years in the game this February, with a special night of raving planned to go down at popular Glasgow club - SWG3.

The team of esteemed organisers and resident DJs behind the brand have all played a hugely significant role in promoting dance music culture across Scotland over the past quarter of a century, and continue to deliver audiences north of the English border with sets from international superstar names.

Cutting no corners and making absolutely no exceptions for next month's anniversary event, Colours will supply its guests with three rooms of music, with each room featuring a jam-packed lineup of DJs performing live over eight hours. 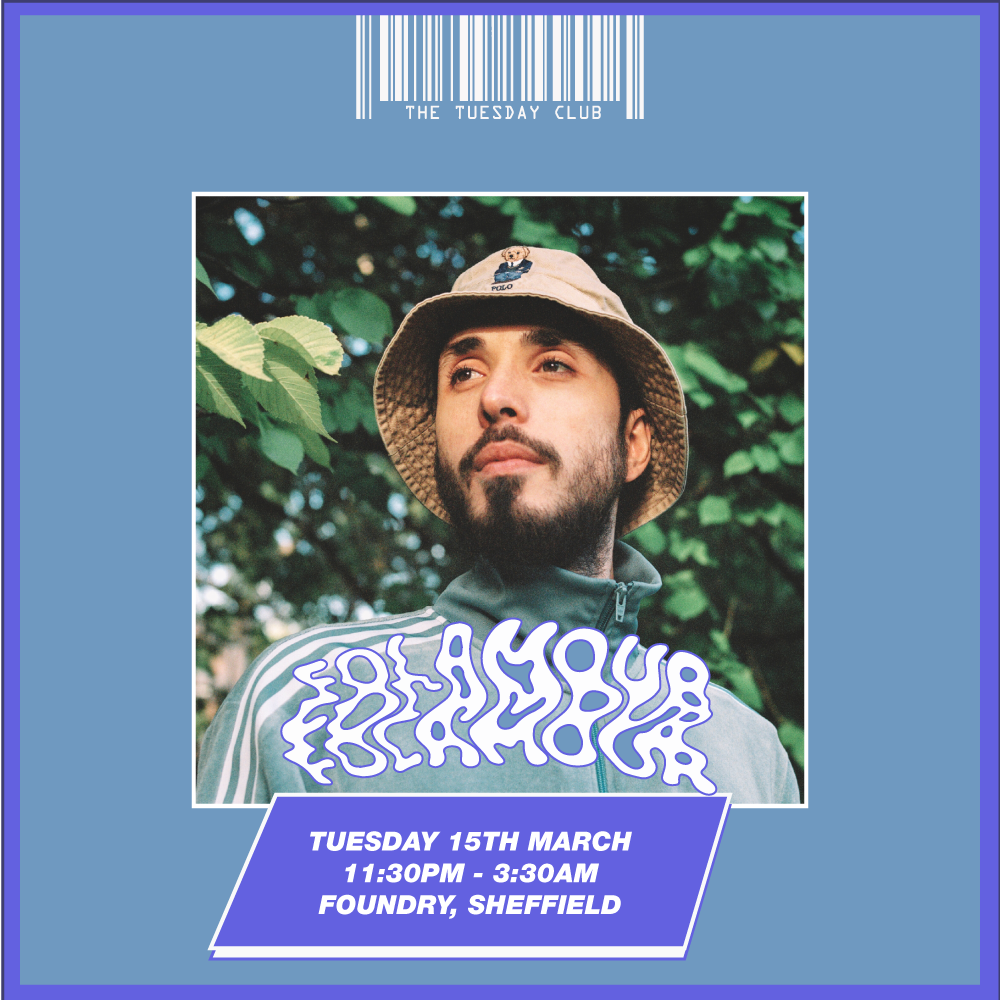 French disco revivalist, label head and composer extraordinaire, Bruno Boumendil, AKA Folamour, has without question become one of the most in-demand DJ names on the international dance scene in recent years.

He's appeared on stages across Europe and the rest of the world - from Edinburgh's FLY Open-Air to Switzerland's Montreux Jazz Festival and Defected Croatia - igniting dancefloors with a mixture of sublime remixes and original dance records, and now he's coming to the North of England.

Courtesy of The Tuesday Club - one of Yorkshire's biggest and best underground student club nights - the Frenchman has been confirmed for a rescheduled appearance, following last October's cancellation. Taking place at Foundry Sheffield, a three-room live music and club night venue at Sheffield Students' Union, Folamour will expertly mix disco classics with his own acclaimed back catalogue. One not to be missed.

Celebrating another milestone celebration in the brand's history, Manchester's Hit & Run will throw a party to end all others on Saturday 5th March with a jaw-dropping lineup that'll have you rubbing your eyes in disbelief.

Tickets are in extremely high demand for this one. Act fast and get yours now on the link below.

Escape to the Isle of Bute this summer for an incomparable festival adventure - Butefest.

Surrounded by stunning coastal scenery on every side and encircled by the waters of the Firth of Clyde, the festival boasts a natural setting like no other. Situated on one of Scotlands most accessible islands, lying just thirty-three miles east of Glasgow city centre, the family-friendly event consistently welcomes fans travelling from all over the UK, eager to experience a fusion of both traditional and modern Scottish culture - including everything from food and drink to new and traditional Celtic music.

Experts at bringing together an always notable lineup of acclaimed artists, this year, festival-goers can expect performances from Scouting For Girls, Scottish bagpipe legends, The Red Hot Chilli Pipers, and a long list of other local names. 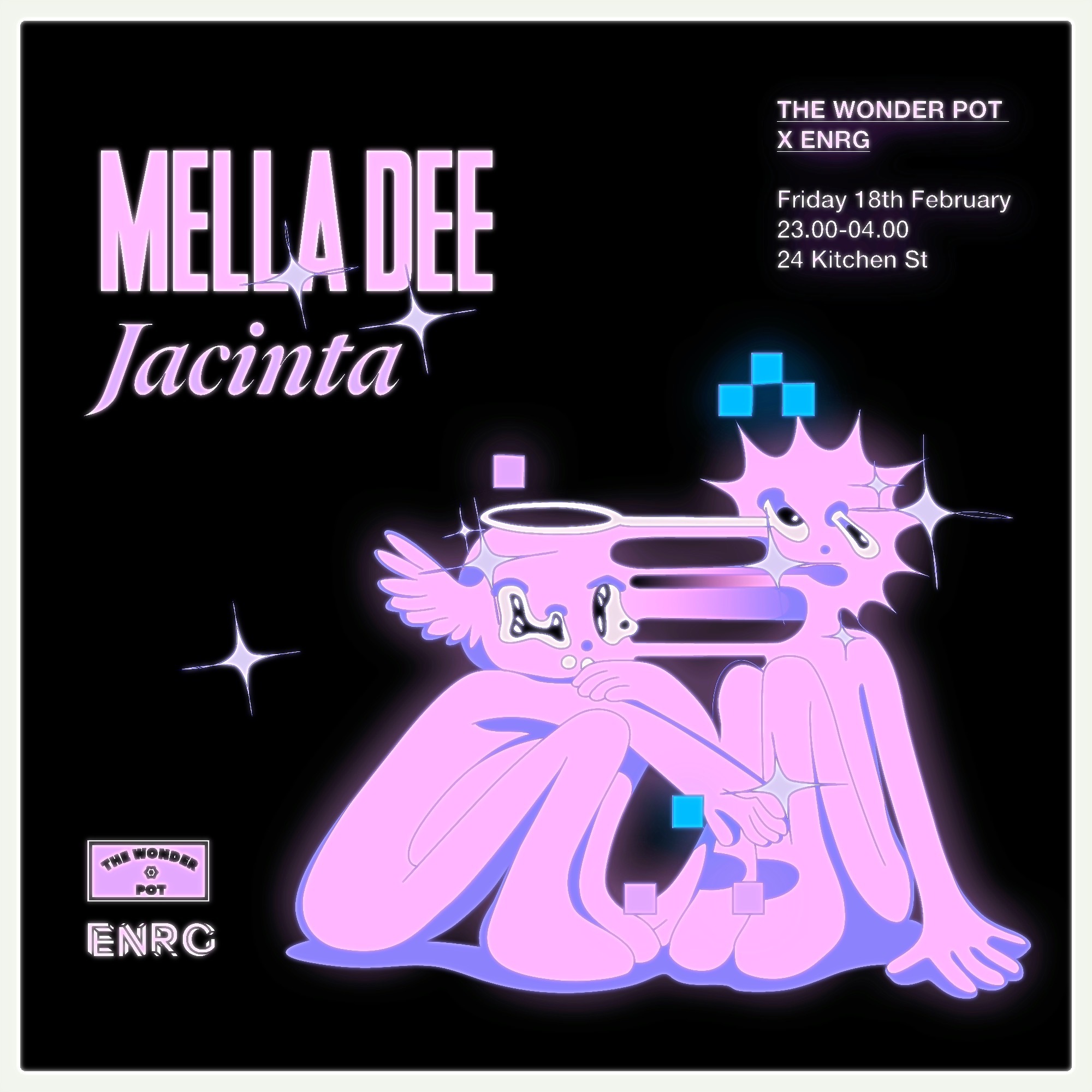 The DJ don of Doncaster, Mella Dee brings his enviable mixing experience to Liverpool this February, teaming up with The Wonder Pot for a definitive night of dance music at 24 Kitchen Street.

A name that sparks excitement amongst regular ravers, Mella Dee first made his mark on the mainstream market back in 2017, with his Sister-Sledge-sampled techno weapon, 'Techno Disco Tool'. An experimentalist at heart with a passion for multiple genres of dance music, he started out mixing everything from jungle and hardcore to garage, dubstep and old school bassline at the tender age of just eighteen years old, something which undoubtedly played a big part in the creation of his own thumping tech-house sound.

Still working hard at honing his craft and releasing new records, Mella Dee has comfortably established himself as one of the best and most intriguing talents in Britain.

Witness his monstrous live set with support from Liverpool DJ, Jacinta next month. Tickets are available below...

Where: Playground Nightclub in Manchester

Get ready to go back in time and relive the golden era of dance music at Manchester's Playground Nightclub this February.

Join a host of dance icons, the likes of Abigail Bailey, Rozalla, Cheryl-Jay, Stu Allan, Jon Besant, Adam Guy and Dave Ellis, spinning the most prominent house, funky house, old skool anthems of the 90s and noughties from 10 pm until 4 am on the following day.

Early bird tickets have now all sold out. Grab your tickets whilst you still can below...