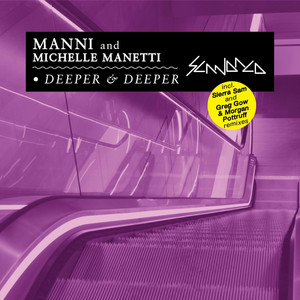 DJ, Vocalist, producer, purveyor of musical delights and prowess of the night, with over 10 years’ experience under her belt, it’s fair to say Michelle Manetti is a jack of all trades master of many. Her love of old skool sounds crosses from obsession to perversion and back again and can be clearly heard in her music.

Michelle Manetti first came to notoriety as vocalist and front woman for Nu Disco-Electronica outfit ‘The Off Key Hat’ whose releases on Andy Blakes vinyl-only label ‘Dissident’ and Yam Who’s ‘ISM’ that teamed them up with remixers such as Ashley Beedle, Daniel Baldelli and Colleen ‘Cosmo’ Murphy elevated the band to cult status. Michelle has also worked as a vocalist, both live and in the studio with the likes of Serge Santiago (Waze & Odyssey) Tom Neville, Fonzarelli, Joey Negro, Pete Gooding and Prok and Fitch. Recent releases include EP's on Brazil's Scandalo Music and Hamberg based Soso.

As well as a vocalist, Michelle Manetti is an accomplished DJ in her own right and has been gracing the decks for over 10 years. From London to Brighton, Ibiza to Australia, she has DJ’d and performed at many a club around the world. Originally taking to the decks in Brighton, she relocated to East London in 2007 and has gained a whole stream of residencies and guest slots at venues such as; Egg, XOYO, The Coronet Theatre, Dalston Superstore, Queen of Hoxton, East Bloc, The Dolphin, Visions, Moustache Bar and The Joiners Arms among many, sharing line-ups with the likes of: Duke Dumont, The Magician, Waze & Odyssey, Jonas Rathsman, Dimitri From Paris, Lee Foss, Martin Ikin & Russ Yallop to name a few.

Having experimented with a variety of genres over the years, she has refined the sounds of her DJ sets and can be heard playing a blissful blend of Tech and Acid House, Deep and Jackin House & Bass with Cosmic and Nu Disco which is also reflected in her productions and vocals as well as discovered on her music blog www.lipstickdisco.co.uk

Michelle is set to release her first solo EP soon, which will encompass The perfect marriage of her own production and vocals; expect some heavyweight house for serious dancefloor action.

Michelle Manetti has been mentioned in our news coverage

Here are the latest Michelle Manetti mixes uploaded to Soundcloud.

Do you promote/manage Michelle Manetti? Login to our free Promotion Centre to update these details.