A selection of some of the freshest, most exciting and outrageous events with tickets on sale this week!

Touring circus-themed extravaganza's, rolling in and out of cities across Britain. Wild and rowdy street parties, welcoming the beginning of a brand new year. Immense summer festivals on the breathtaking Welsh coastline, long-awaited world tours from reunited artists, and unusual raves in disused car showrooms... Just some examples of the many amazing - and very niche in some cases - parties and social gatherings on offer in this week's New On Skiddle roundup.

Scroll down and browse our pick of the best-looking events, all with tickets available to buy this week. Just click or tap on the event titles, artist or venue names (or follow the links provided) for tickets and more.

Where: Rock City in Nottingham | The Mill Digbeth in Birmingham | Y Plas in Cardiff

Cirque Du Soul has announced it will head back out on the road through late November and early December this year, taking in five dates across the UK on its festive Winter Wonderland tour.

The travelling party collective, described as a modern-day Moulin-Rouge with a bass music soundtrack, will make its first stop in Nottingham at the end of the month before landing in Birmingham, Cardiff and Leeds in early December, rounding off the adventure in Loughborough on Saturday 11th December.

Amongst the many star-studded DJ names confirmed to appear live as part of the tour are the likes of Dan Shake, Horse Meat Disco, Prospa, Redlight, Jax Jones, Harriet Jaxxon and more.

Tickets will sell out! Get yours now below... 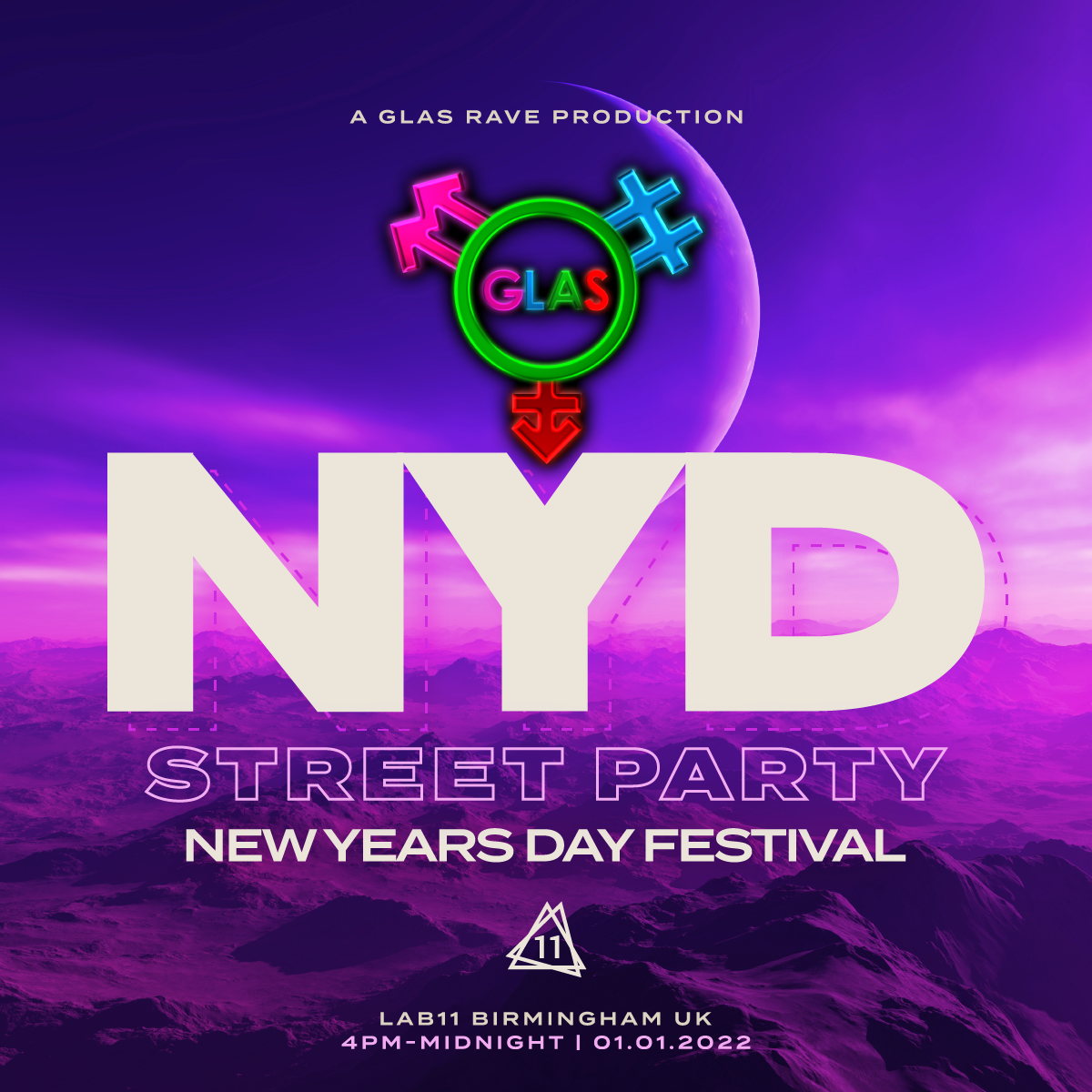 Seasoned party throwers, Birmingham's GLAS will return to the city centre this New Years Day for their first end of year event in over a year!

Going bigger and harder than ever before, the brands' first event of the year is set to be a remarkable one. In addition to taking control of the entire LAB11 venue complex, GLAS also plan to shut down the surrounding roads to make way for their first-ever street party and main-stage arena.

Featuring an insane lineup of yet-to-be-announced lofty selectors - representing the best of the best in disco, house, drum n bass, garage and more - production on an epic scale and an array of other treats and surprises... This is how you begin a new year.

Prepare yourself for one of the biggest New Years Day parties in Birmingham's history. Limited tickets are now on sale.

Where: Tramshed in Cardiff | The Warehouse in Leeds

Off the back of a HUGE sold-out performance in London earlier in the year, the MBE awarded personality announced his Isolation Nation tour. Recreating his popular lockdown live stream sessions, broadcasted out his kitchen throughout 2020, in massive venues across the UK, punters who decide to experience the multi-talent in action can expect a heavy mix of both classic and current house music hits.

Tickets have recently been made available for shows in Cardiff, at the Tramshed, and in Leeds, at The Warehouse. Get yours now on the link below...

Where: 02 Victoria Warehouse Manchester in Manchester

Ambassadors of the hard dance scene, Ben Nicky, W&W, Laidback Luke and more will take Manchester by force next year, as they lend their talents to help initiate Hellfire's 2022 programme of events.

The devoted team of specialists behind the event brand have promised a sensory-overloading experience, with mesmerising production including roaring pyrotechnic displays and explosive CO2 cannons. One not to be missed.

In It Together Festival 2022

Forty-thousand festival-goers, three days of fantastic live music across five jaw-dropping stages, a diverse lineup of world-renowned artists, and an alternative programme of cultural experiences. Sound like a bit of you? Get in the know and experience a brand new music and arts festival in 2022 - In It Together.

Coming to Port Talbot, Wales next summer, a festival on a scale the likes of which has never been seen in the stunning valleys of the mountainous nation. Taking place from Friday 3rd June to Sunday 5th June 2022, this family-friendly open-air event will deliver a carefully hand-picked programme of performers, consisting of over fifty local talents and a host of international stars, in addition to a timetable packed with different entertainment options - including yoga, meditation, cabaret, stand-up comedy, circus fun and more.

Find tickets for In It Together Festival 2022 - here 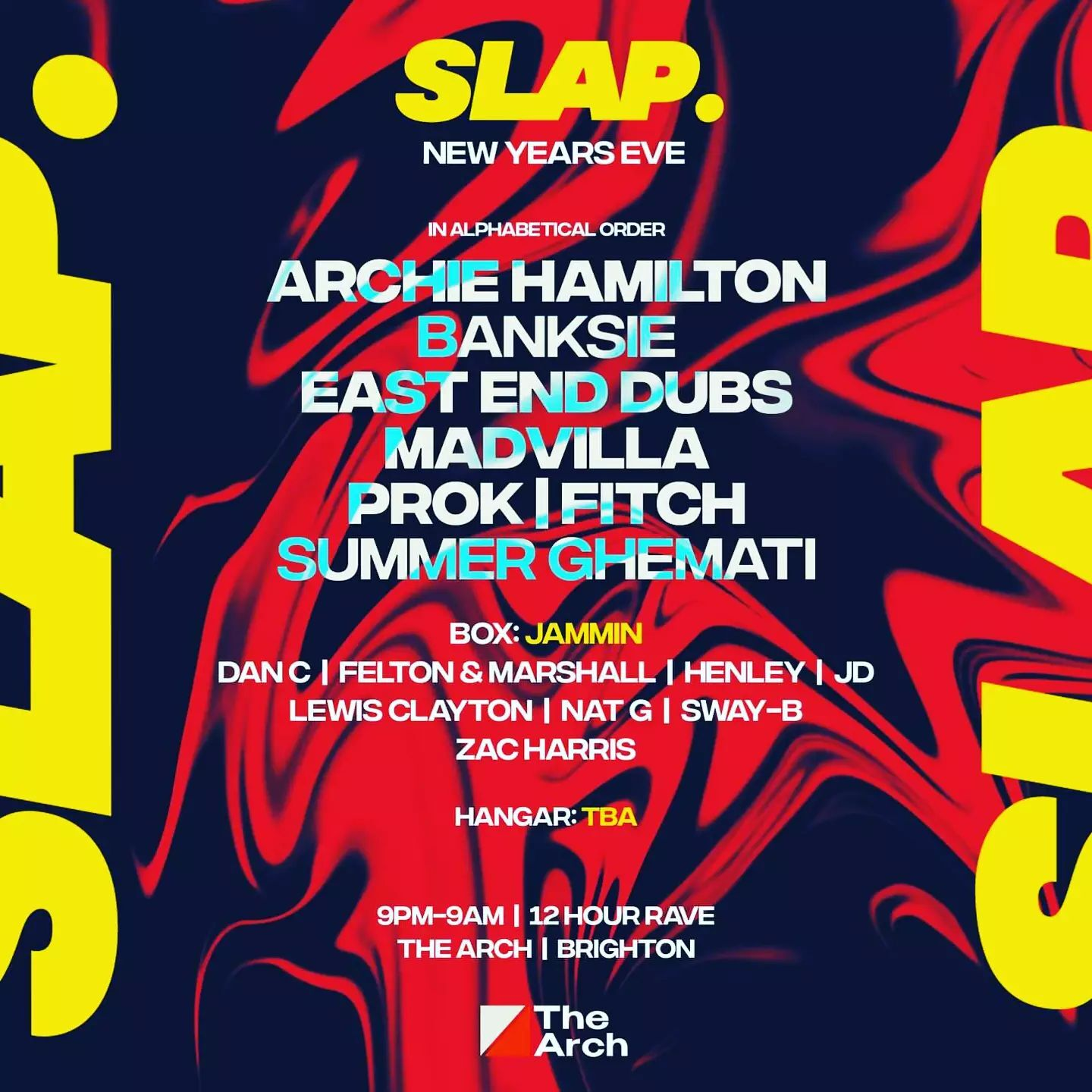 New Years Eve looks to be a big one in Brighton this year, with the SLAP. team announcing a stupendous twelve-hour rave spectacular to welcome 2022.

Antics will commence from 9 pm on Friday 31st December ending on Saturday 1st January at 9 am - without doubt one for the most hardcore of ravers amongst us - with legends of the current house music scene, Archie Hamilton, Banksie, East End Dubs and Madvilla, to name a few, putting those present through their paces.

Join the long list of lofty selectors and producers at Brighton venue, The Arch and hail the beginning of a brighter year in music this New Years Eve.

For those few of you out there who haven't already heard the good news, globally adored dance collective, Swedish House Mafia have announced they will embark on a mega world tour in 2022. Remain calm.

The news comes after the trio of legendary producers, made up of Axwell, Steve Angello, and Sebastian Ingrosso, officially reunited earlier in the year, signing a new record deal with Republic Records. Releasing singles 'It Gets Better', 'Lifetime' and 'Moth To A Flame', from forthcoming debut LP, Paradise Again, the new material marks the beginning of a new era for the outfit, after almost a decade away from the scene.

As is to be expected, tickets for both the Manchester and Birmingham dates are in limited supply. Do not hesitate, we repeat, DO NOT HESITATE. Get yours now or risk disappointment.

Where: The Showroom in Manchester

Manchester's Animal Crossing will put its best on show this November. Providing an array of live performances from a handful of reputed electronic talents, 'The Showroom' will see revellers going big in a disused Citroen Car showroom turned quirky nightclub, situated on the outskirts of the inner city.

Keeping their foot firmly on the gas and continuing their onslaught of first-rate dance events across Manchester, the party pundits behind the exciting brand have secured sets from groovy house trio, Apollonia, who will send it for a full six hours, Hamish & Toby, Christian AB and Animal Crossing honcho, son of Sean Ryder - Olli Ryder.

A dealership with a stark difference. Make sure you're fueled and ready for this eleven-hour clubbing adventure.

Where: The Underground in Stoke-on-Trent

Dan Shake, undisputedly one of the worlds hottest and most in-demand DJ names right now, has agreed on terms with The Move to make his debut appearance at Stoke-on-Trent music venue/nightclub - The Underground.

Contributing to the next Blue Collar Disco function, the superstar selector and producer of funky disco dance anthems will make his anticipated arrival and, in due course, turn the venue on its head on Saturday 27th November, as part of his European tour.

Spinning the finest cuts in disco, house, hip hop and soul, resident DJ names David Dunne and Les Croasdaile will take the funky dancefloor loving cats of Manchester on a whirlwind ride through decades of fantastic music, concluding in the small hours of January 1st 2022.

A word to the wise - Previous Funkademia New Years Eve events have always sold out in advance, and with early bird tickets priced at just £6, we expect the same again this December. Don't hang about, click on the link below and dance your way into 2022.

Check out our What's On Guide to discover even more rowdy raves and sweaty gigs taking place over the coming weeks and months. For festivals, lifestyle events and more, head on over to our Things To Do page or be inspired by the event selections on Inspire Me page.