We sent Ben jolley to immerse himself in just about everything Wireless has to offer over all three days.

Calvin Harris proved his superstar status, Chase & Status wheeled out a dozen guests and Fergie made a real popstar comeback at Wireless 2016…

Whilst Scotland's T in the Park faced lashings of rain and a muddy festival site, the thousands of hip-hop, dance, grime, pop and R&B lovers who descended on Wireless in Finsbury Park were blessed with glorious sunshine for the whole weekend. There really wasn't a grey cloud or drop of rain in sight

Chase & Status wheeled out vocalists and rappers like it was second nature during their politically-charged set while Slaves, Novelist, Liam Bailey, Louis Mattrs and George the Poet each made a stand in post-Brexit Britain. 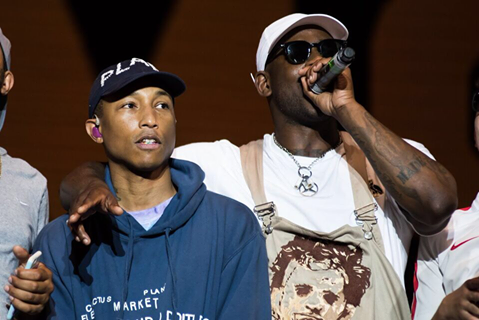 Walking towards bag check, you can hear Miguel's sensual R&B tones from afar; "I love you Miguel!" screams one very excited girl while others happily pose in front of video cameras. After getting our bearings a little by walking around the site, we find the press area is conveniently located next to the main stage, set behind the VIP area in which Radio 1's Phil Taggart is DJing upbeat house to a small crowd.

Back at the main stage, the crowd is rapidly filling up for The 1975, who make a triumphant Wireless festival debut. "Ladies and gentlemen, it's your new favorite band, oh my god," beams charismatic frontman Matt Healy in typically tongue-in-cheek fashion. They have no problem warming the crowd up for EDM-favouring headliner Calvin Harris.

Sporting black shades, a Harley Davidson t-shirt and with a U.S. flag tied to his black skinny jeans - in light of the recent shootings in America - they launch into an undeniably infectious concoction of synth-pop and indie rock, kicked off by the purposefully narcissistic ‘Love Me’.

The four-piece are a strange booking choice for Wireless but they prove the doubters wrong almost instantly; especially since earlier in the day they announced a UK arena tour. "This is our first time being here and we feel very welcome. Thanks for having us," Matty enthuses, cigarette in hand.

There's just something infectious about their instantly dance-able riffs and a whole lot of saxophone solos. Though there’s a serious message, as Matty poignantly proclaims “this song's about loving people rather than fucking shooting them”. ‘Girls’, soon after, warrants a massive sing-along and a few thousand arms in the air. "These things are important. Music festivals are important,” he later continues impassioned.

“Our country is called the United Kingdom but we're anything but United. Racial attacks have gone up five times since we left the EU,” he adds, giving the set a thought-provoking relevance; “music transcends all race and gender,” he points out.

It's nice to see an influential popstar using their voice for good, politically provocative reasons. It won’t be long until The 1975 are headlining major festivals.

Meanwhile on the much smaller stage three, Kurupt FM are tearing it up in front of a capacity crowd; constantly getting their selector to spin it back, switching ‘Welcome to Jamrock’ to 'Wireless' whilst Coco Cole drops banger after banger in the VIP area: ANOTR's ‘Strobe’ really goes off.;It’s a great energy-riser ahead of tonight’s headliner.

Everyone quickly piles into the main arena in anticipation of Scottish superstar DJ Calvin Harris. Literally no-one could have guessed who would walk on stage next.

WILL SMITH?! The ‘Men in Black’ legend casually strolls to centre stage to introduce his friend, Calvin Harris. The Scotsman’s laser-heavy set boasts dozens of EDM-tinged bangers, including edits of Rihanna’s ‘Bitch Better Have My Money’, Major Lazer’s ‘Lean On’ and Skepta’s ‘That’s Not Me’, all moulded between his back catalogue of huge chart hits from the last decade.

He doesn’t put a foot wrong over the hour-plus set. He just rattles them off like a massive hit list: you forget how many bangers he's produced.

The second guest of three, Dizzee Rascal, bounces on for their new collaboration ‘Hype’, during which he mingles with the front row touching fans’ hands. The sky starts getting a little darker during 'Feel So Close' before Big Sean joins Calvin to rap on their collaboration ‘Open Wide’ - it really feels like we could be in Ibiza at this moment.

Whilst getting the audience to light up the park with their camera phones and lighters, Adele’s ‘Hello’ quickly empties everyone’s vocals, before its sent sky-rocketing into EDM territory. There's no questioning Calvin’s status as one of the world’s most in-demand DJs and producers.

Feeling surprisingly sprightly, we head down early to catch rising talent Jorja Smith stun a busy stage three crowd with her mesmerising, effortlessly soulful voice. ‘Goodbye’, written when she was 16 for a friend who was struggling to cope with bereavement, is poignant and emotional.

‘People’, produced by Cadenza, follows with sub-heavy bass complimenting her confident vocal range before it erupts into a drum and bass breakdown. Closer ‘Blue Lights’ already sounds like a classic, as iPhones are raised in the air to record the infectious track - on which she showcases her impeccable flow. Jorja Smith is unquestionably a name to watch

Hood up and cap on, beers immediately go flying in the air and the crowd surfing/mosh pits ensue throughout ‘Hella Hoes’, ‘Shabba’ and the apocalyptic bass of ‘New Level’. Monstrous doesn’t begin to cover the energy.

Whist on route to catch Wilkinson, the Mixmag Lab is popping off thanks to Ms Dynamite. ‘Wile Out’ has the crowd bouncing to her unmatchable flow and ‘Gold Dust’ gets arms flung up in the air without hesitation.

She takes a break, though, to urge people to join a #BlackLivesMatter protest in Oxford Circus on Sunday morning by giving a passionate speech: “black people cannot keep dying at the hands of policemen,” she sustains, urging the crowd to raise their fists to the air in honour of Alton Sterling…

Her energy is endless, much like the massive crowd watching drum and bass titan Wilkinson in the Pepsi Max Arena. With a drummer, two vocalists, guest performer Shannon Saunders, a guitarist and Wilkinson himself on synth pads, it's made into a proper live show. "W's in the air”, the hype-man encourages, leading the capacity audience through each anthem.

The biggest crowd of the day award has to go to Mr Craig David (beaten only by Young Thug’s Sunday tent capacity) whose audience spills way back from the tent. Dropping old school classics including tracks by Sean Paul and newer favorites there’s no surprise we overhear one group confirming, “It's gonna take us a week to get in here and then a week to get out again”.

Air sirens bellow from the speakers and red smoke floods the stage in anticipation of Chase & Status’ Saturday evening headline slot. Wheeling out nearly a dozen special guest singers and rappers, Tempa T is the first, bouncing onstage like a bull in a china shop for a typically crazy moshpit-inducing rendition of ‘Hypest Hype’.

“This one’s for England” claims their MC, as Tunbridge Wells-born duo Slaves storm onstage bringing their fearless punk attitude to Wireless throughout ‘Control’ as frontman Laurie Vincent screams and shouts down the microphone. It’s a complete middle finger to the current political situation and the establishment in general.

"London, at times like this, with what’s going on home and abroad, we need to stand together and keep on keeping on" encourages MC Rage. George the Poet stops the crowd in their tracks during a euphoric rendition of the thought-provoking new single ‘Spoken Word’.

Jacob Banks carries on the same life-affirming theme with ‘Alive’ whilst Liam Bailey joins Chase & Status to close the night with ‘Blind Faith’. One of the weekend’s best sets, easily.

After jumping on the tube a group of girls scream “party” when we arrive at Finsbury Park, clearly ready to make the most of the festival’s last day. Though you might expect the audience would feel tired come Sunday, there was no sign of fatigue or weariness.

To say the crowd crammed into Ty Dolla Sign’s set was crammed would be a ridiculous understatement the same goes for Young Thug later in the day. Genuinely, we’ve never been pushed and shoved so much in our lives.

As beers fly overhead, umbrellas are put up for protection: bear in mind this is before the LA-based rapper has even stepped foot onstage. By the time ‘Don’t Tell ‘Em’ is played, the crowd erupts with cheers, singing along. No Sunday blues here, that’s for sure.

It’s a real crowd-pleasing set, as she kicks off - sporting a red jacket, knee high boots and a tight black ensemble; with the throwback of ‘Fergilicious’.

"Wow I miss you, man. I am so grateful to be back up on this UK Wireless stage,” she enthuses passionately. There are certainly no signs of rust, and she in arguably knows how to work a crowd - and most definitely the stage.

She’s joined by two acoustic guitarists for ‘Big Girls Don't Cry’; a rare, soft and heartfelt moment which sees girls and guys singing their hearts out. And her vocal at the end: wow, she's got some pipes.

Whilst Young Thug’s DJ has to ask the crowd to move back so they can carry on with the raucous show, things are far less rowdy back at the main stage for the mellow, sunshine-friendly hits of pop star Jess Glynne.

A stripped-back, piano-led version of ‘My Love’ leads into the raw emotion of ‘Take Me Home’, though she quickly picks up the pace with the Gorgon City-produced house vibes of ‘Right Here’. It sounds even better in the glorious sunshine, boosted by two trumpeters and a saxophonist.

‘Hold My Hand’ is given a sort of drum-heavy tribal introduction before the piano chords and Jess’ undeniable vocal encourage a mass sing-along. It's impossible not to watch her and sing-along without a massive smile spread across your face.

Throughout a pyrotechnic-blasting EDM-heavy set, Martin Garrix sets the stage on fire. Remixes of The Weeknd’s ‘Can't Feel My Face’ go off whilst his edit of ‘Gold Skies’ is met with fireworks. ‘Don't Look Down’ and his breakthrough smash ‘Animals’ transport the crowd to Tomorrowland for an hour.

“If it was up to me I'd play for longer, but I’ve only got one song left,” he teases before dropping newer singles ‘Lions In The Wild’, his video game-sampling ‘Oops’ and future hit ‘In The Name of Love’ a massive collaboration with rising popstar Bebe Rexha and Diplo-touted producer Marshmello.

Bringing tropical house to a sunny Sunday evening set, ‘Firestone’ and ‘Younger’ set the tone nicely as couples and friends embrace each other. Fergie even comes out for ‘Sexual Healing’ as red and blue balloons are launched into the crowd. Sadly, at this point we have to leave Wireless to catch tubes and trains but it felt like the perfect way to end...

Got you in the mood? Our Festival Finder has your perfect ticket.