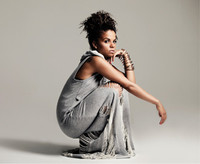 Ms Dynamite (originally called Lady Dynamite) was first known for her vocals on the UK garage underground track "Booo!", which was regularly played on London pirate radio stations and was later released as a single. Whilst working at the radio station RAW FM, Ms Dynamite was discovered by Richard Forbes at a West End club. After working briefly with the UK garage act So Solid Crew, she released her debut album, A Little Deeper in 2002, featuring the hit songs "It Takes More" and "Dy-Na-Mi-Tee". In 2003, the album was released in the United States to critical acclaim. In 2002, Dynamite won the prestigious Mercury Music Prize, for A Little Deeper. She donated the £20,000 prize to the NSPCC.

Ms Dynamite has been mentioned in our news coverage

Hellfire returns to Manchester in 2020 with huge line up

Below is a sample playlists for Ms Dynamite taken from spotify.

Do you promote/manage Ms Dynamite? Login to our free Promotion Centre to update these details.