As music venues nationwide ready themselves for the return of gig-goers, we continue to see an upsurge of new show announcements from a wide array of in-demand names. And boy is it good to see.

We can't express how ready we are to be stood in front of a live band once more; crammed into a hot and sticky venue with a severely overpriced pint of flat lager in hand, singing and dancing to our favourite tracks for the first time in over a year. Yes, we even miss the overpriced lager! That's how desperate we are!

If like us, you're finding it hard not to get carried away and you need to start booking tickets for some upcoming live shows, we've got just the thing...

Below, you'll find a list of recently announced gigs and tours with tickets now on sale. Don't miss out on your chance to witness the return of live music in 2021, and sample an atmosphere the likes of which may never be felt, seen or heard again.

Click or tap on the event titles, venues and artist names below for tickets and more...

Critically acclaimed singer-songwriter Benjamin Francis Leftwich has recently announced a huge tour of the UK in 2022, which will see the born and bred Yorkshireman stopping off at Liverpool music venue, Leaf in February next year.

The 29-year-old acoustic-led performer, who broke out into the mainstream back in 2011 with his astonishing debut full-length Last Smoke Before The Snowstorm, has recently released three brand new singles from his fourth studio album, To Carry A Whale.

Check out the video for 'Cherry Tacoma' from the new album, below...

In support of the forthcoming fourth record, Leftwich will perform live at a total of 26 music venues across Britain, including the Komedia in Brighton, the Bodega Social in Nottingham, The Liquid Room in Edinburgh, Manchesters Band On the Wall, and The Globe in Cardiff to name a few.

Where: District in Liverpool

Vancouver-based art collective, Crack Cloud have fast become a familiar name amongst fans of post-punk. Appearing on the underground scene back in 2018, with their self-titled debut album, the abstract troupe create what has been self-described as 'visual music', depicting each member's personal experiences with drug addiction, oppression, politics and more.

The core seven-piece band, whose music is augmented both on and off stage by an ever-changing group of collaborators, ranging from filmmakers and visual artists to musicians, have gained notoriety over the past two years for their dystopian sound and aesthetic, and have even been referred to as a cult.

Making the journey over from Canada to Europe this summer, to promote the group's second LP, 2020's Pain Olympics, the band are set to perform in venues across Britain, arriving at Liverpool's District on Thursday 26th August.

Alabaster dePlume is the proud Mancunian and skilled multi-instrumentalist tackling themes of anxiety and fear through the medium of jazz music and spoken word poetry.

The London-based composer, bandleader and foremost saxophonist, real name Gus Fairbairn, is openly influenced and inspired by the people he's met throughout his life, none more so than those he's worked with during his time as a mental health support worker back at home in Manchester. In fact, dePlume's latest album 'To Cy and Lee: Instrumentals Vol 1' is dedicated specifically to two of the adults he helped to support. It's also his most successful album to date.

Dig a little deeper into the musical maestro's back catalogue and you'll find a magnificent collection of sooting, lullaby-esque records with a handful of considered lyrics delivered in dePlumes signature style strewn throughout.

If you're looking for a unique live music experience in 2021, we highly recommend going to watch Alabaster dePlume.

The solo project of trilby donning, multi-instrumentalist and musician extraordinaire Dan Turnbull, Funke and the Two Tone Baby brings together live guitar, harmonica, beatboxing and more, constructing an enormous wall of sound that even a four or five-piece band would struggle to recreate.

With rhythms that make your body move involuntarily and unforgettable earworm melodies, the accomplished singer-songwriter has been winning over fans across the UK for several years and has even performed live at festivals such as Kendal Calling, Boomtown Fair and The Secret Garden Party.

Catch the virtuoso playing tracks from his most recent album Denizen, live at Bristol's Louisiana music venue this November.

Powerful vocals and expressive lyrical content positioned perfectly over an authentic and cohesive 90's grunge soundtrack. A description that doesn't quite do justice to the sound that awaits you on Life in Mono's first and only EP release.

The self-titled four-track is an impressive opening account from the fast-emerging Bristol-based band, who appeared on the scene fully formed and rehearsed back in 2019. Citing influences the likes of Placebo, Mazzy Star and rock goddess PJ Harvey, we're expecting big things from frontwoman Sarah Clayton and her band in 2021.

Head down to The Louisana in Bristol on Saturday 10th July and hear tracks the likes of lead single 'Forbidden Fruit' live and in the flesh.

Find tickets for Life in Mono in Bristol here 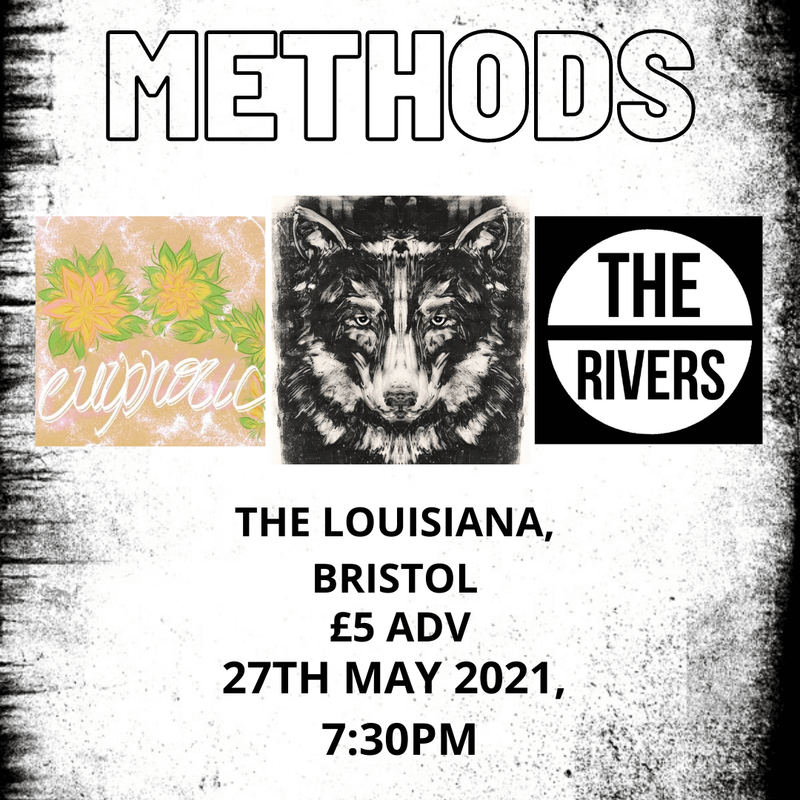 Taking place this May at The Louisana in Bristol, the arts society, whose focus is to promote the city's flourishing live music scene the creatives that gravitate to it, will throw one of the first parties to happen at the popular independent music venue this year.

Can't get a ticket? Don't panic. The event's organisers have announced that a live stream of the gig will be available to watch online, at a 'pay what you want' donation rate.

Find tickets for Methods, The Rivers and Euphoric in Bristol here

Those unaware of psychedelic instrumentalist outfit The Brackish might be more familiar with each of the band member's former projects. Boasting quite the collective CV, the four-piece group have performed over the years with the likes of This is the Kit of Rough Trade Records, Zun Zun Egui of Bella Union Records and Phantom Limb of The Naim Label.

Making a huge impact on the alternative music scene with the release of their first progressive, jazz loaded, new-wave amalgamation back in 2014, Tough Guys and follow up full-length record Liquid of Choice in 2016, the weird and wonderful band have conquered audiences across the UK, Europe and beyond. Renowned for their spectacular live performances, they've also secured shows at festivals the likes of Bristol's ArcTanGent and La Ferme Électrique in France.

Catch them performing tracks from their latest album, 2018's Firm But Fair, live at The Louisana in Bristol this June.

The sister of folk music legend Rufus Wainwright and daughter to Loudon Wainwright III, also a successful folk musician, the 45-year-old songstress has an impressive musical lineage, with melody and a knack for composing quite literally ingrained within her DNA. Returning to the fore with her first collection of music in almost half a decade, the popular acoustic artist is set for a very busy year in 2021.

In addition to sharing the lead single from the album last week, 'Love Will Be Reborn', Wainwright has also announced a run of tour dates through September this year, with performances taking place in London, Birmingham, Cardiff and Sheffield, at The Leadmill.

For more live gigs, tours and festivals, head to our Live page or try out our Festival Finder Tool