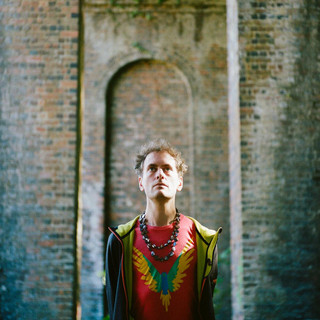 “You know when you’re ugly

Alone, Alabaster will use his speech, song and behaviour to hold a room in moments of beautiful and bizarre clarity. He has been described as “Harrowingly funny.”

When accompanied, he appears with John Ellis (Kirsty Almeida), Ellis Davies (Honeyfeet), Paddy Steer (Homelife), Hannah Miller (Moulettes) and Jessica Macdonald (Pepino), and delivers a score, song and theatrical poetry performance, of which one audience member said, “I had to keep laughing, or I think my heart would’ve exploded.”

He works with Debt Records in his hometown Manchester, has toured Germany and France, and performs around the UK in festivals, bars and concert halls such as Band on the Wall in Manchester.

In May 2012 he released a debut LP, that was the focus of two years devotion, that crosses disciplines and artforms, and that has been hailed as a rare, unique and indeed “great” piece of work by those who have been exposed to it.

Alabaster dePlume has been mentioned in our news coverage

Here are the latest Alabaster dePlume mixes uploaded to Soundcloud.

Do you promote/manage Alabaster dePlume? Login to our free Promotion Centre to update these details.