The likes of The Snuts, Zuzu, Cast, The Ks, and Lona are the latest to be added to the Neighbourhood line up, joining Ian Brown, Catfish and the Bottlemen, Sam Fender Miles Kane and more.

After a sensational 2019 edition which saw George Ezra and Richard Ashcroft top the bill, Neighbourhood Weekender have announced the first wave of acts for their 2020 festival at Warrington's Victoria Park on the weekend of Saturday 23rd - Sunday 24th May 2020 - and the line-up looks mega.

Topping the bill on the opening night will be none other than Stone Roses frontman Ian Brown, who will make his first major solo headline performance in almost a decade at the event, performing tracks from his 2019 album, Ripples, and from his mighty back catalogue, which includes songs likes 'Stellify', 'F.E.A.R', 'Set My Baby Free' and 'Dolphins Were Monkeys', in what promises to be an unforgettable homecoming show.

On the Saturday, one of the biggest indie bands of the past decade, Catfish and the Bottlemen, will perform a headline show at the festival, with Van McCann and the rest of the Bottlemen boys sure to deliver the goods in some style at the Bank Holiday weekender.

The latest acts to join the bill include Gang Of Youths, The Snuts, Zuzu, Cast, Nasty Cherry, Lauran Hibberd, The Hara, Cassia, Dylan John Thomas, Lona, Talk Show and Warrington’s own The K’s.

Neighbourhood Weekender 2020 tickets will go on sale at 9.30am on Friday 22nd November - and you can purchase your tickets below.

Catfish and the Bottlemen

Here are the next 2 upcoming events At Victoria Park, Warrington 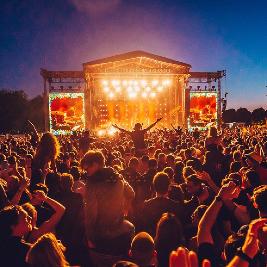