It seems the Autumn has well and truly arrived as the weather, for most of us, took a turn for the worse over the weekend just gone. Sadly, the time has finally come to pack away that redundant sunscreen and those sunnies you're still reluctantly holding on to until the spring and summer of 2023. Farewell, summer of 2022. It's been a ride.

Now, our attentions turn indoors to the thousands of nightclubs and live music venues that'll keep us warm, dry and thoroughly entertained over the following wet and colder months. Luckily for us, said venues and clubs are already ten steps ahead, boasting listings that'll take us right up until the New Year, featuring some of the hottest names in house, drum n bass, indie, metal and more.

Sounds too good to be true, right? Wrong. Check out some of the mind-blowing, recently announced live events running throughout the latter half of the year, listed below in this week's New on Skiddle.

(Click or tap on the event titles, artists or venue names for tickets and more) 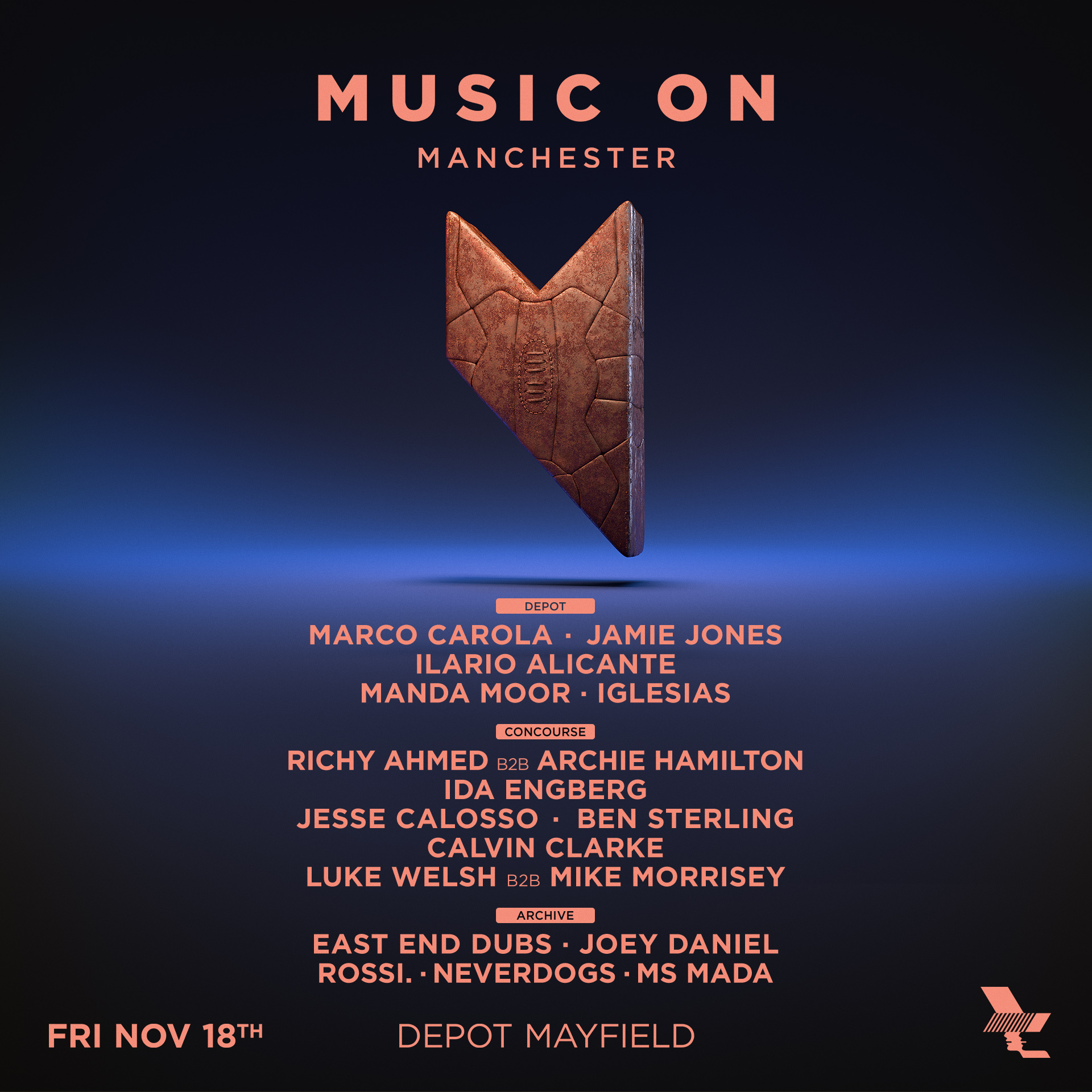 The 2022 Warehouse Project season is now in full swing with events at the monstrous Depot Mayfield coming thick and fast. Just one of those which will see some of the biggest names in dance music right now taking over the massive rave space is 'Music On'.

Scheduled to take place on Friday 18th November, the likes of Hot Creations boss, Jamie Jones, groove-maestro, Manda Moor and Archie Hamilton, one of the most sought-after names in the electronic scene at present, will show off their dancefloor commanding expertise alongside a wealth of other quality DJ names.

Tickets are now on sale and unsurprisingly, selling fast. Get yours on the link below before it's too late. 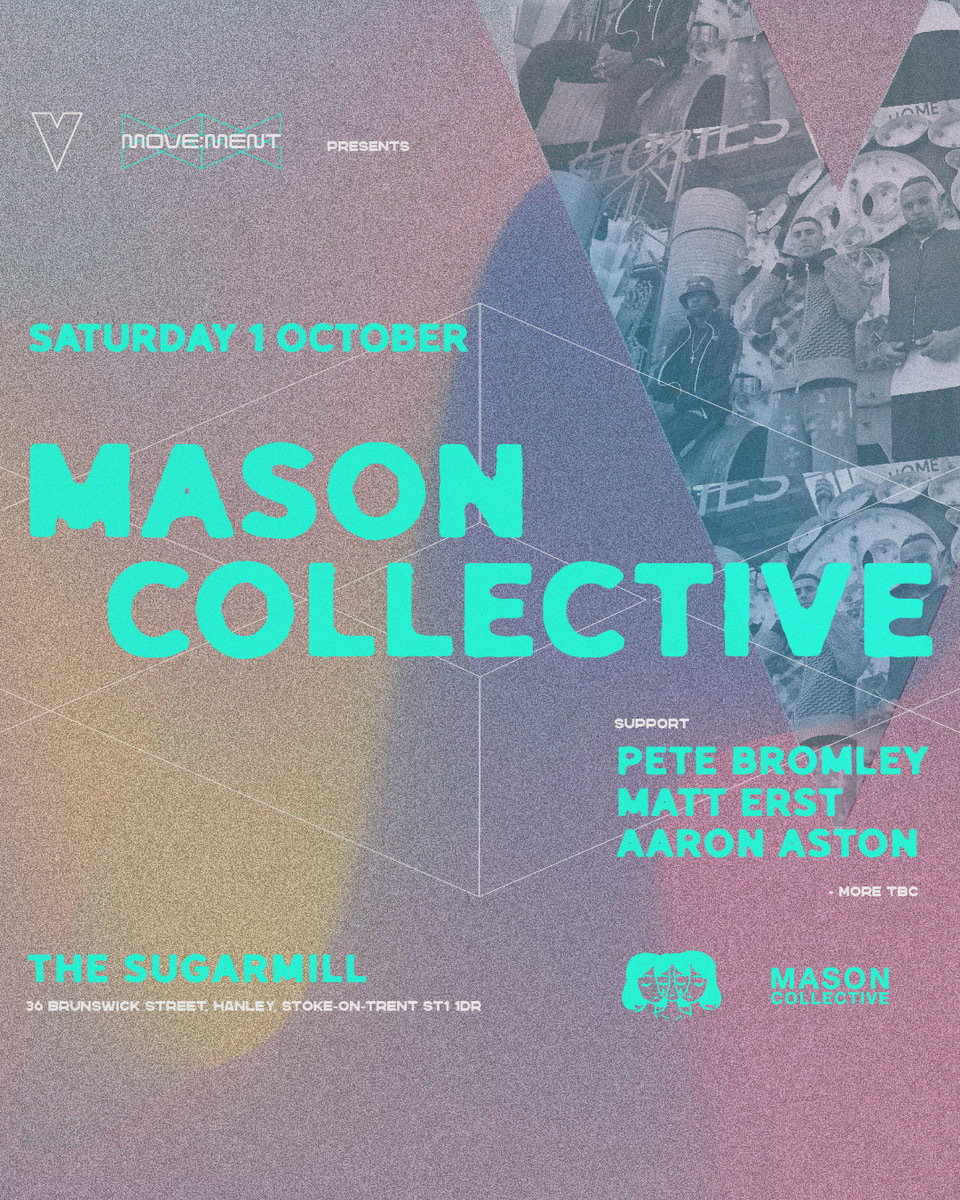 Where: The Sugarmill in Stoke-on-Trent

Mancunian trio, the Mason Collective head to Stoke-On-Trent this October, to warm the city's substantial dance contingent with a set chock full of dance weapons.

Hosted by MOVE:MENT, the collective behind the recent Bank Holiday shenanigans at the much-loved venue, which saw party-starter, Sam Divine providing the vibes, the upcoming all-night rave will see ravers moving to the finest cuts in minimal house and tech from dusk right through until dawn.

Endorsed by many of the world's top DJs, Mason Collective have secured bookings at some of the UK's biggest dance spectacles, from The Warehouse Project and Creamfields to Parklife, whilst also appearing at events overseas, in Ibiza and at Croatia's Hideout Festival. Be sure not to miss their Sugarmill debut at the beginning of next month. 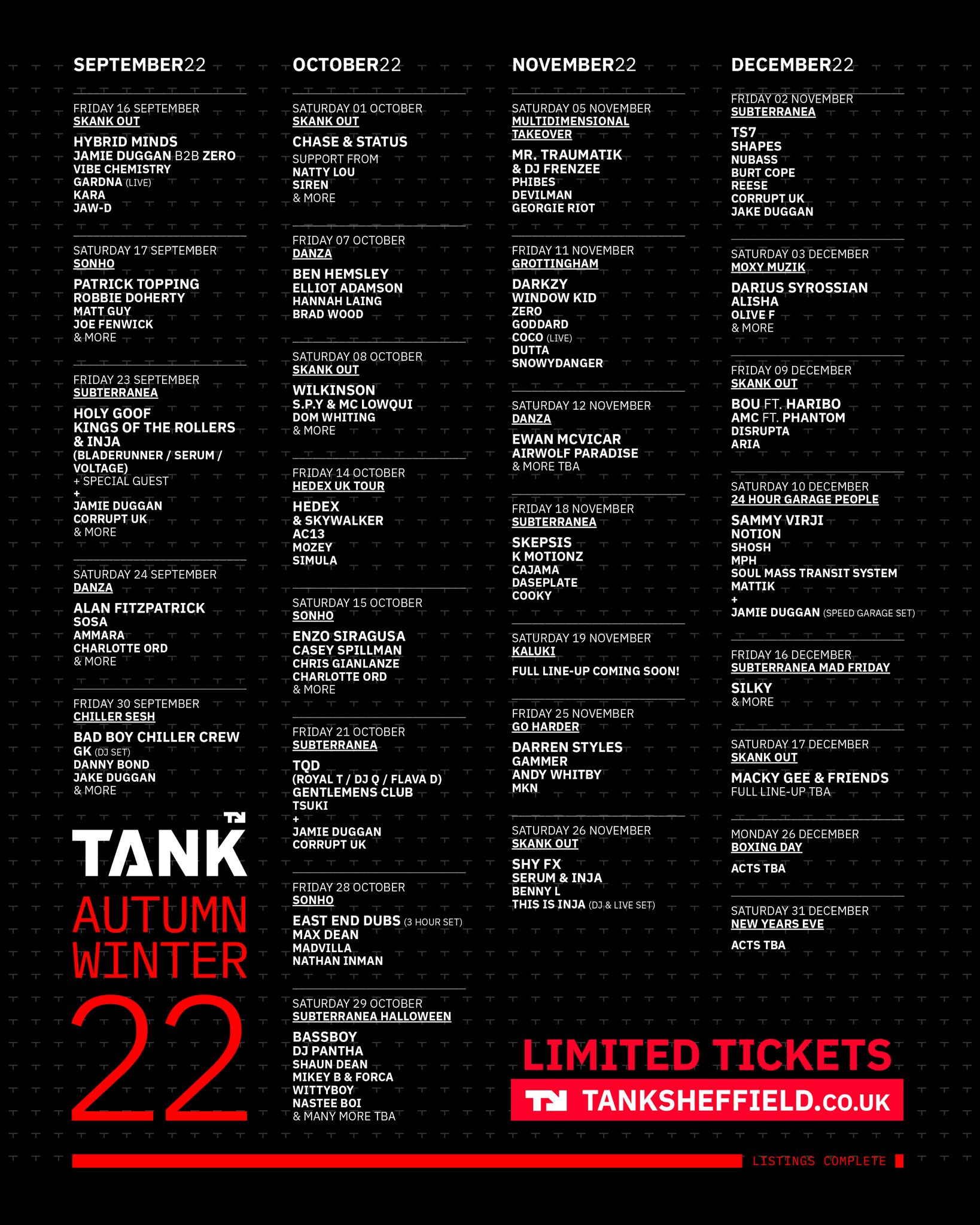 Where: TANK Nightclub in Sheffield

Getting us all giddy and excited for the autumn and winter seasons to come, Sheffield's TANK Nightclub has revealed its mammoth programme of events set to run over the next four months.

Setting the standard amongst other clubs and venues dotted around the North West of England, the series of parties, launching at the end of this week, will include live performances from a selection of world-renowned DJ talents, representing a broad variety of genres and styles.

Tales In The Park Norwich 2022

Where: Earlham Park in Norwich

A brand new music festival is about to make its grand debut in Norwich this September...

Telling the tale of three different worlds, covering music, art and culture, the first-ever edition of Tales In the Park Norwich is certain to flabbergast all those who choose to experience its otherworldly magnificence. Prepare yourself for a theatrically-led live music festival like no other, with performances across three separate arenas from the most highly regarded names in drum n bass, house and UK rap. Watch this space for lineup announcements as they come.

Be part of a new story written in Norwich this year, and ensure your attendance at Tales In The Park 2022. Get your tickets now at the link below.

Find tickets for Tales In The Park Norwich 2022 - here 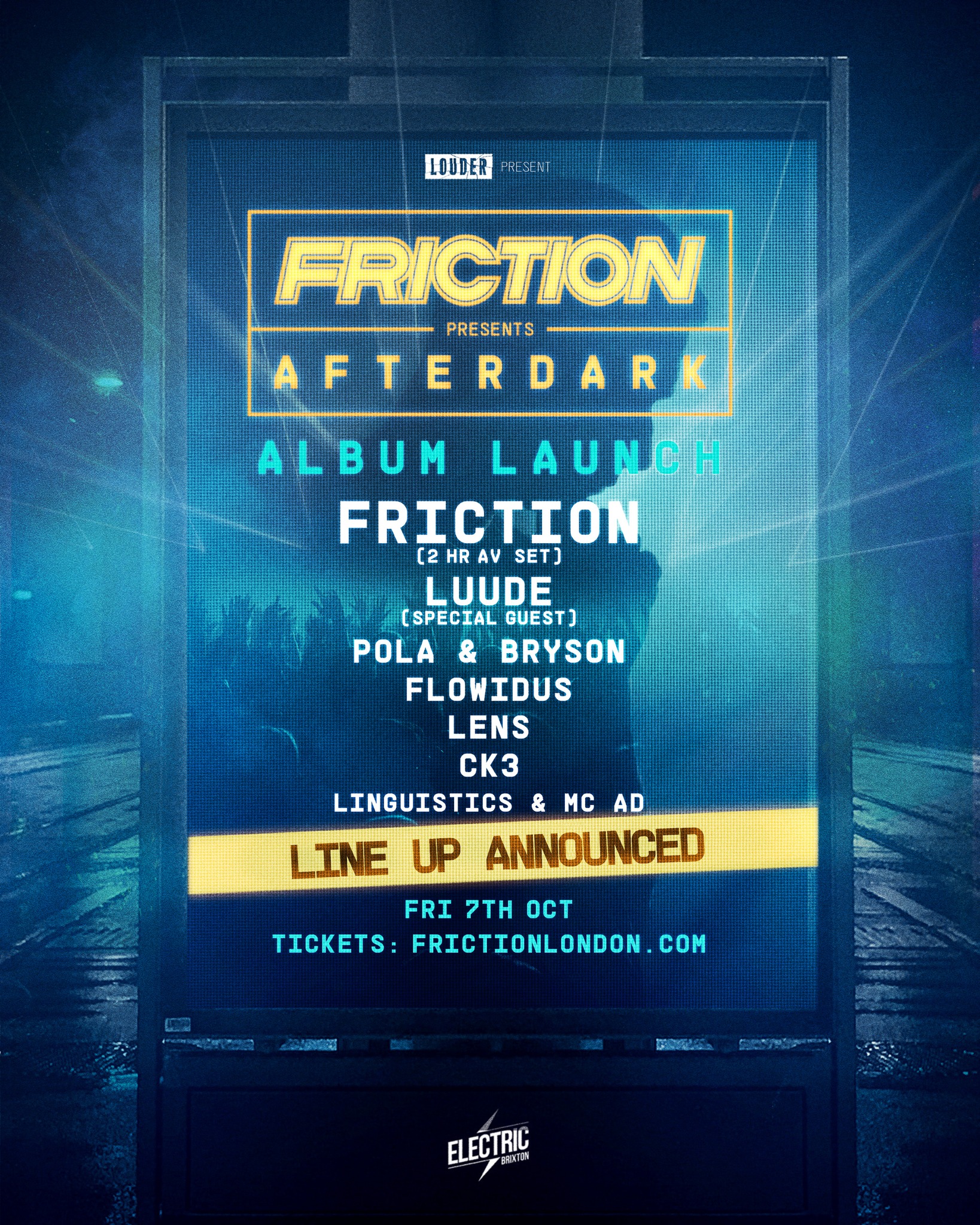 Multi-award-winning drum n bass producer and head honcho of Shogun Audio and Elevate Records, Friction is poised to mark the release of his latest, greatly-anticipated studio album, After Dark, with a monumental launch show at popular London venue, Electric Brixton next month.

The Brighton native, who's recently been heard teasing out elements of the new record at events across the UK, makes his return to the capital for what will surely be yet another massive sold-out showcase. Expected to join the accomplished talent on the night are a group of his closest D'n'B allies and roster friends. More details are yet to come.

Be one of the first to hear the new album live in all its glory, in London this October.

Garage Nation In The Dam 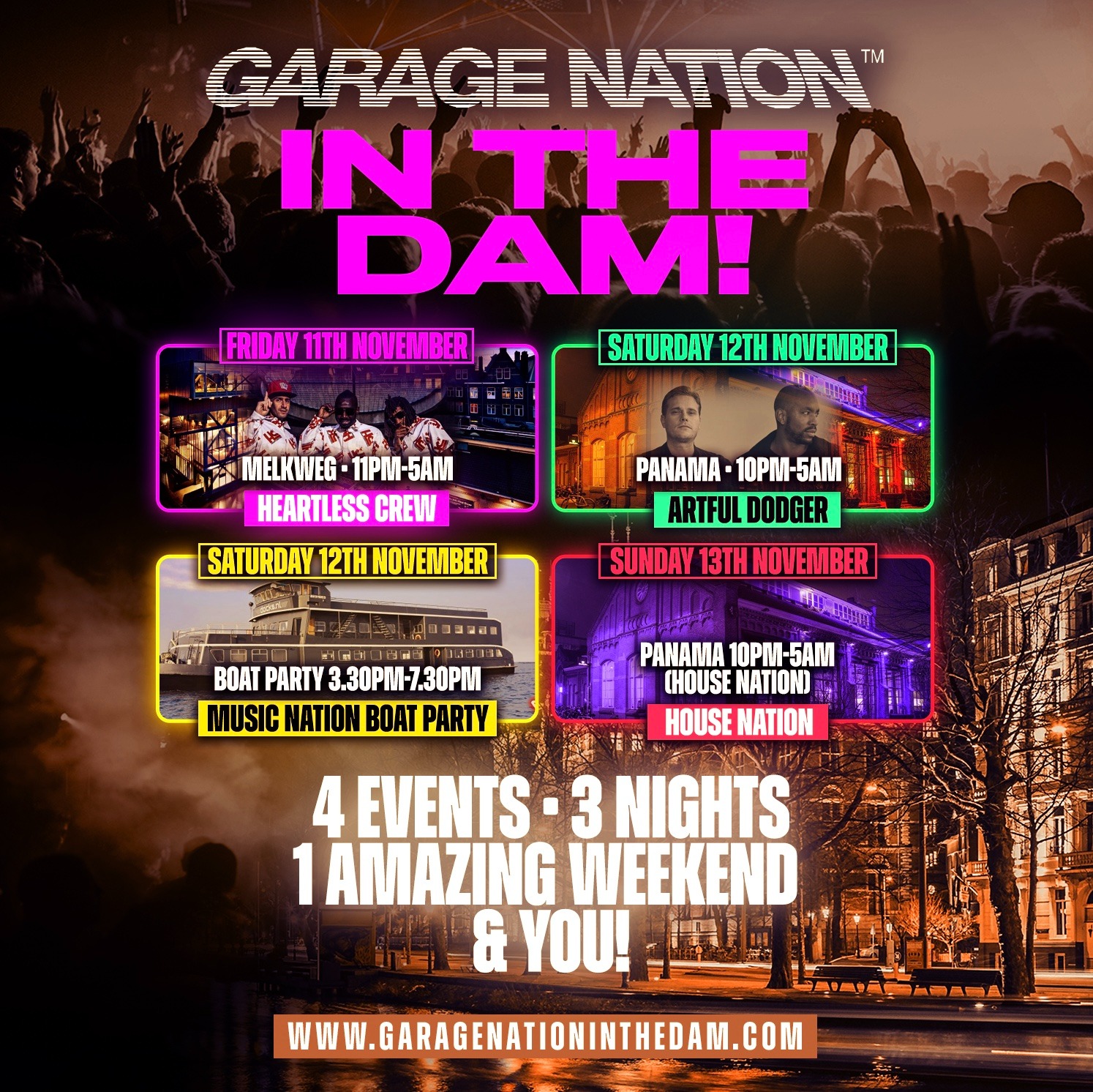 Where: Melkweg in Amsterdam

Fancy taking a three-night trip to Amsterdam, to witness an eye-watering bill of UKG originators performing classic garage anthems across four amazing events? We thought so...

Amsterdam's Melkweg is where you'll want to be this coming November, as renowned titans of the scene, Oxide & Neutrino, Romeo & Lisa Maffia, Matt Jam Lamont, DJ Piped Piper, Heartless Crew, Artful Dodger, DJ Cartier and many, many more light up the various spaces and stages in the raving hotspot of the Dutch capital.

And don't just go for the music! A holiday and festival all rolled into one, Amsterdam has been dubbed one of Europe's top destinations for tourists with plenty to see and do.

Find tickets for Garage Nation in the Dam - here 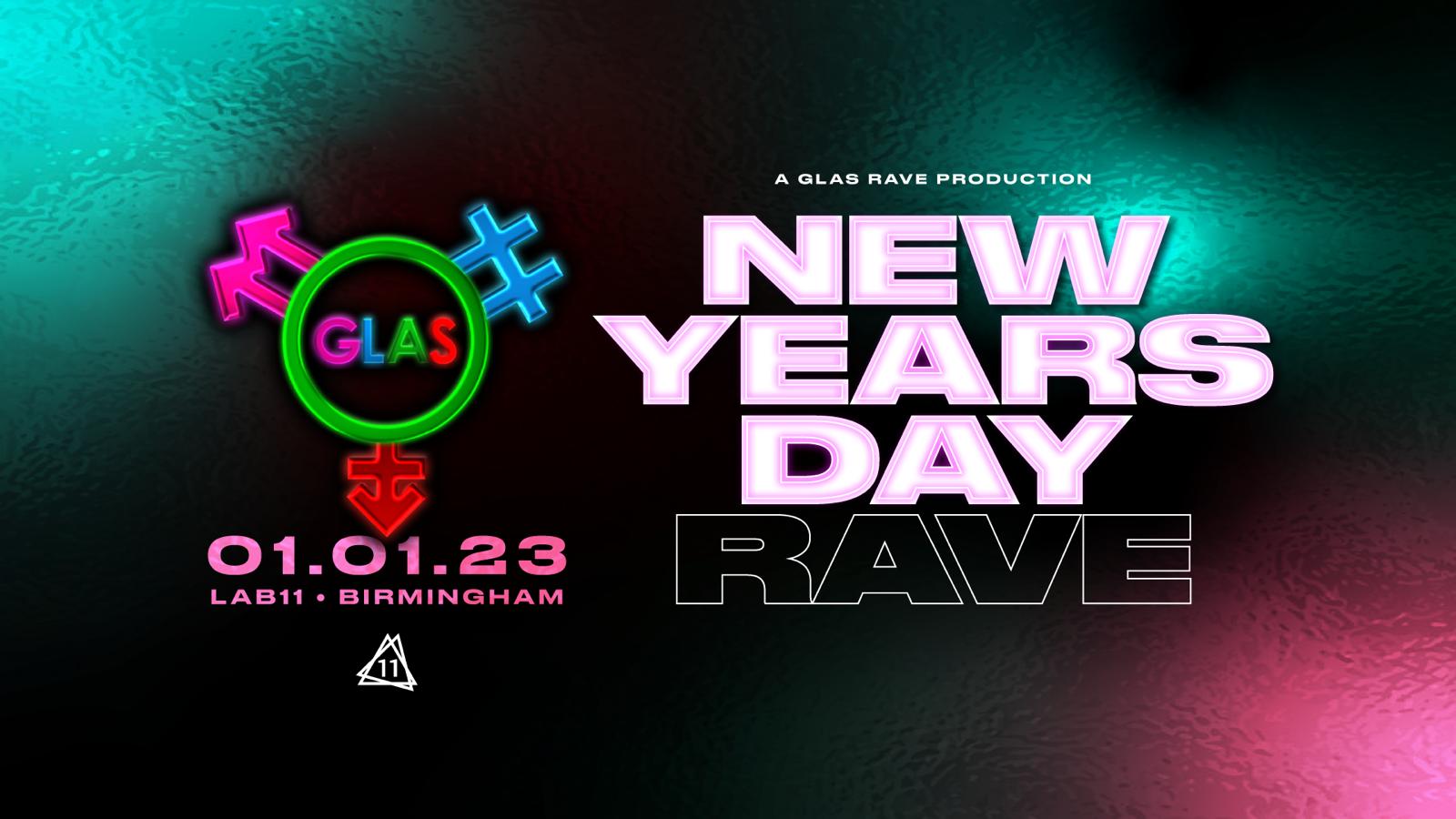 Yes, you read that right. The hype has already begun. Just over 16 weeks remain until the turn of the New Year, where will you be when the clock hits midnight on December 31st? Haven't given it much thought? Might we suggest Birmingham's LAB11 for an end-of-year party to shut down all others?

Seasoned party pros, GLAS have announced their annual New Year's Day special, proclaimed as 'arguably the biggest event in the Birmingham party Calendar', promising a vibe the likes of which you won't be able to find anywhere else in the UK.

So, what's to be expected? Guests can look forward to seeing a staggering programme of entertainment bolstered by numerous sought-after names, elevated by next-level production, featuring only the very best in lighting and sound, across 9 long hours.

Beat the mad rush of the crowds later in the year and solidify your New Year's plans today. Tickets are on the link below... 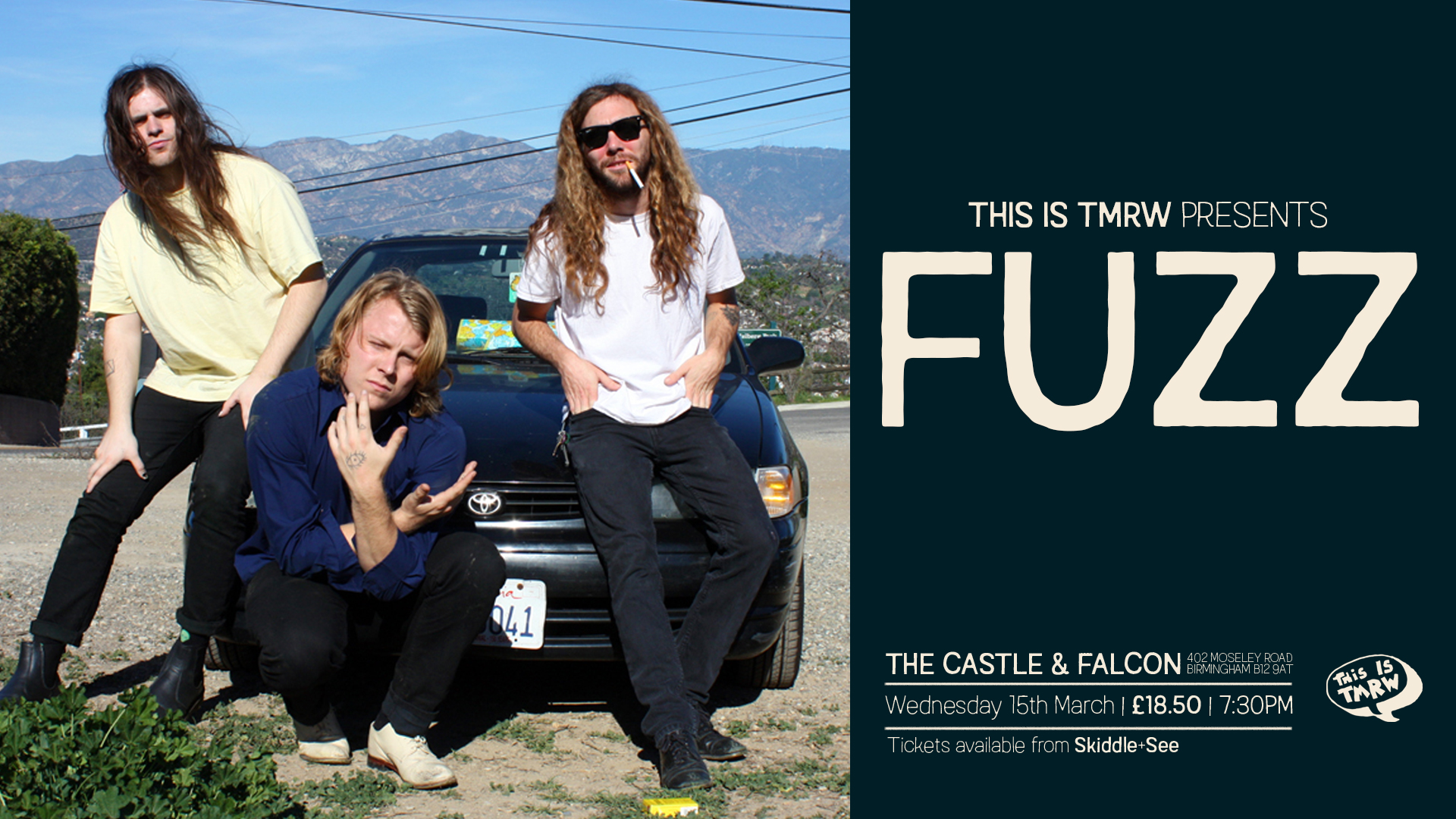 Where: The Castle And Falcon in Birmingham

Garage rock revivalist, Ty Segall and long-time friends and collaborators, Charles Moothart and Roland Cosio, otherwise more commonly referred to by their collective stage name, Fuzz, have announced their return to Europe in the spring of 2023 following the postponement of this year's tour across the continent.

Cancelled due to a 'band member’s ongoing recovery from a medical situation', the tour was scheduled to take in dates in the Netherlands, Germany, Spain and France, before lastly arriving in Britain. Sticking to the original plan, next year's jaunt will see the trio rocking out in Rotterdam, Madrid and Paris in the lead-up to three dates in the UK. The first of which takes place at The Castle And Falcon in Birmingham.

For fans of psychedelic icons the likes of Jimi Hendrix and early architects of metal, Black Sabbath, do not miss your chance to see this mind-melting band live on home soil in 2023.

Student Discount: Where to find the best student benefits