Tickets for the friendly Surrey summer festival are now live.

Surrey festival Weyfest has released details of its lineup for 2020, with a number of big names and household acts due to descend upon the Rural Life Centre in Tilford between Friday 21st - Sunday 23rd August.

The Weyfest 2020 lineup features Friday night headliners The Feeling, best known for a slew of 2000s indie pop hits including 'Sewn', 'Never Be Lonely', 'Love It When You Call' and 'Fill My Little World' from their much 2006 debut album Twelve Stops and Home.

Headlining the Saturday night are UK reggae legends UB40, who are no strangers to entertaining huge crowds in a career spanning five decades. While the big name act bringing the house down on the Sunday night of the festival is yet to be announced.

Also featured on the bill are the likes of The Dualers (who you can learn more about below) Nik Kershaw, Republica, Dreadzone and loads more.

Weyfest 2020 tickets can be purchased below.

Here are the next 3 upcoming events At Rural Life Centre Tilford Surrey, Farnham 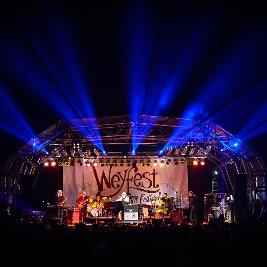