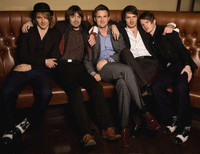 The Feeling tickets and 2021 tour dates

The Feeling is a five piece indie/pop band from Horsham, Sussex, and London in England, attempting to make easy-listening hip. Following a limited release of their debut "Fill My Little World" in late 2005, the band entered the UK Top 10 with their first full release "Sewn" in March 2006. The single was one of the year's biggest radio hits, after being played first in the UK on the Dermot O'Leary Show, BBC Radio 2, along with their first live radio session. Their debut album Twelve Stops and Home was released in the UK on June 5, 2006 and on February 27, 2007 in the US.

The Feeling has been mentioned in our news coverage

Here are the latest The Feeling mixes uploaded to Soundcloud.

Do you promote/manage The Feeling? Login to our free Promotion Centre to update these details.