Ahead of their show with Caribou at Manchester Apollo this weekend, we caught up with the experimental trio to talk about the new album, adapting to the loss of a member, and Gary Numan.

Losing a member would certainly take its toll on a band, but if their fantasy replacement came through, their mourning would understandably, and quite expectedly, cease to exist.

American experimental trio Battles made a list of artists they’d like to work with, and Gary Numan was on their ‘if pigs could fly’ list. Well, you can imagine how pleasantly surprised guitarists Wiliams, Konopka and Stanier were when a pig flew past, leaving in its trail one English electro-pop icon Gary Numan.

With the recent release of sophomore album Gloss Drop, Jasmine Phull talks to John Stanier about turning a bad situation on its head.

My Machines features the soulful voice of electronic maestro Gary Numan. How did that collaboration come about?
JOHN: I have been a mega fan for many years; he was one of the "fantasy" artists that we chose. Of course I didn't think he would even give us the time of day, but we had WARP call his people and the next thing we knew we're in his dressing room after he played Boston listening to him tell us how much he likes the track and how weird we are. (Laughs).

You’ve said you were unsure whether the vocals would fit with the music. Explain the process of creating the track 'My Machines'. Why did you create one part before the other?
JOHN: That is a complicated question to answer, but we had the general idea for that song floating around for some time... we just needed a legend to solidify the masterpiece that is 'My Machines'.

How is Gloss Drop different to your debut Mirrored? What’s one thing that had the most influence on your second musical output?
JOHN: Well obviously Gloss Drop was written by three people instead of four, so that's a big difference. Gloss Drop is the result of taking a negative situation and turning it into a positive one - we were acting on complete instinct when we wrote it.

You had a number of artists feature on the album including Kazu Makino from Blonde Redhead. What is your opinion on collaboration versus competition? Was collaboration an important part of this album?
JOHN: Being that none of us can sing and that there were four songs that needed vocals we decided (again on instinct) that it would be best to ask for a little help from our friends.

Does being on the road stagnates or inspire your creative output?
JOHN: I am constantly experiencing the vicious circle of touring. When I'm on the road I miss my girlfriend and my records, when I'm home, after about one week, I miss playing places like St. Gallen, so there is no rhyme or reason. But I'll take hanging with my girl if I had to choose. (Laughs).

How important is the live aspect of the Battles shows? Are there certain elements you put a lot of emphasis on?
JOHN: Playing live to us is "bringing the party to the people" - it is very important to us.

At festivals the crowd is always divided between those who know you and those who don’t; how do you approach that divide?
JOHN: I can't say that we ever feel pressure to deliver and maybe that is because of our self-confidence when playing live. I would not want to be doing this if we didn't know what we were doing on stage.

Catch Battles at Manchester Apollo this weekend, in a special Parklife warm up show with Caribou, Ramadanman, Actress, Star Slinger, Illum Sphere and Kelpe. Tickets are priced just £22.50 and are available below.

Here is the next upcoming event At Manchester O2 Apollo, Manchester, 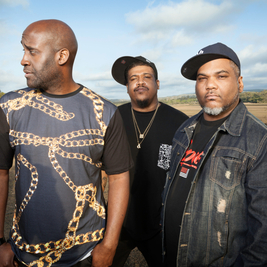 Hailed as pioneers of hip hop, the legendary De La Soul bring a live band to Manchester for a headli...