Daniel Lovatt witnessed the launch of WHP19 at Depot (Mayfield).

In the age of excess, the brand-new and improved Depot (Mayfield) location sees Manchester’s most esteemed club night shimmer with surplus. Boasting three gargantuan rooms, five bars, impeccable speakers and otherworldly light displays – The Warehouse Project has taken the ‘bigger and better’ mantra in its stride and seemed ever so comfortable in its new 10,000 capacity home.

Of course, this was night one. With a hectic three months in store until the final night on January 1st, there is always pressure during the test of opening night. But, there’s a reason why The Warehouse Project is notorious for delivering consistently unbeatable club experiences, drawing in the biggest names and sold-out crowds. Once again, they delivered.

Leaving the Store Street location behind, which although still fantastic, is comparatively David standing next to this Goliath, the organisers have split the venue into three massive rooms. The main stage, Depot – an industrial football field surrounded with the best speakers money can buy. Then, Archive and Concourse, two equally respectable stages. There is no more suitable place to welcome the godfather of electronica himself Aphex Twin. The rare bird of the rave scene added another formidable, electrifying performance to his catalogue.

The anticipation of the flocking crowd was tangible from the start. The Concourse stage saw Zuli and Lee Gamble tear any pre-Aphex nerves to shreds with a thoughtful, well-balanced dance extravaganza. Gamble in particular displayed an affiliation to the headliner, with broken and drawn-out synth loops layering his set. 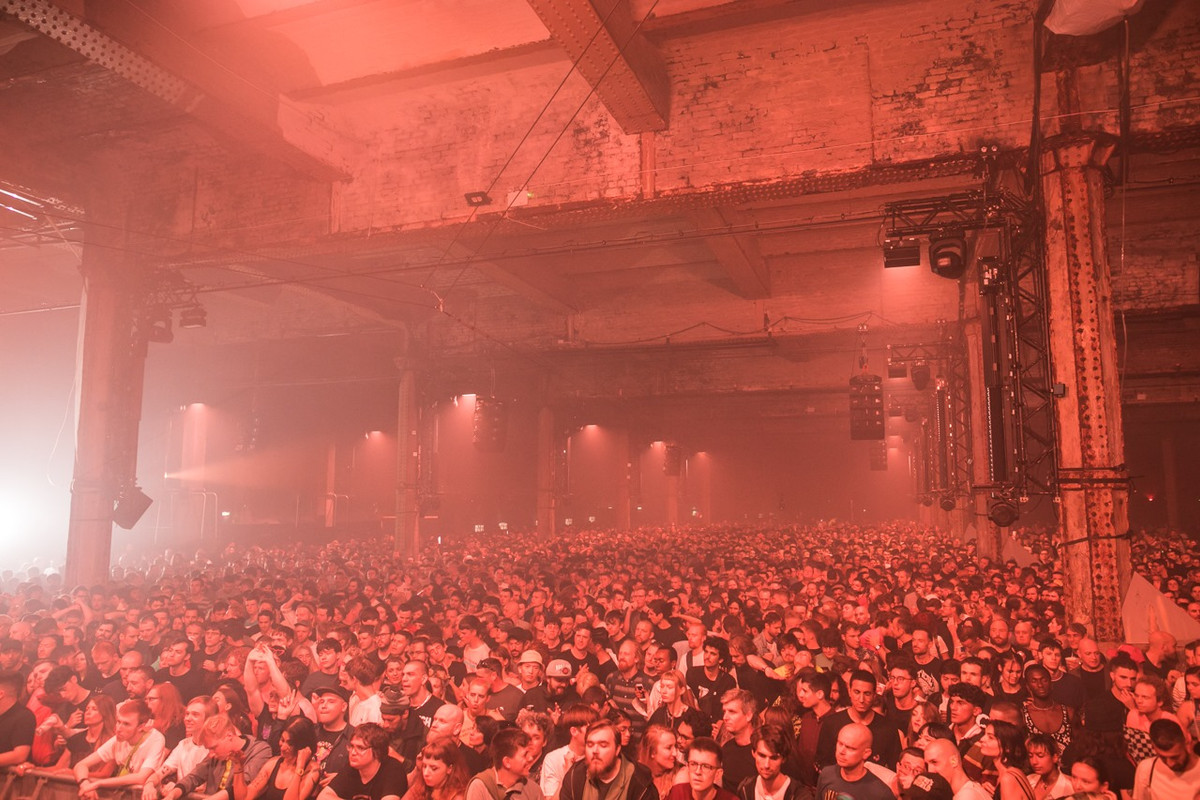 She was followed by Archive Headliner Renick Bell, who demonstrated exactly why he is infamous for his algorithmic live compositions.  Bell packed a welcome punch, chopping effortlessly between snares, drum machines and discordant beats across a vast spectrum of tempos. It was difficult to believe that it was the same artist playing throughout his ninety-minute set. He set the mood aptly for Aphex and showed why Japan is desperate to keep him near.

The Depot stage saw 33EMYBW warm the throne wonderfully both with sets that imposed a sense of dread within landscape. With 33EMYBW in particular using gradual builds and snappy kickdrums to evoke a sense of excitement and angst within an environment, which couldn’t have embodied the occasion more suitably. Aleksi Perala left us gasping for more with his hour set with some masterfully subtle techno filled with delicate sine tones and unexpected melodies. The ability to hold the crowd without a blasting kickdrum and often spontaneous nuances, a complement to his unique abilities.

Then, the moment we were all yearning for. The clock struck midnight and Aphex Twin, accompanied by his wife, graced Manchester with his angelic presence. Partnered with visuals that saw both unknowing crowd members and famous Manchester faces like Eric Cantona and Frank Sidebottom warped and tainted by the trademark Aphex smile, he paved new boundaries of non-conformity once more in a way that the English language struggles to provide adjectives for.

But, if we must try. It was a spectacle, both challenging and consuming. Lush soundscapes, highly complex, eclectic rhythms and the Aphex secret sauce that merged to a once-in-a-lifetime sensory assault. Unless you’ve been lucky enough to see him before. Both head-rushing and pastorally ambient, the crown stays where it has resided for the past twenty years. Opening night brought alive by one of the biggest hitters in electronic music.

Whilst the audience may have needed a minute to gather the million pieces of their minds, techno impresario Nina Kraviz turned one million pieces into ten million with an equally enthralling albeit heavier set. Known for unrelenting kickdrums with a sense of intimacy, she had every head bobbing with those infamous stylistics but also incorporated a more breakbeat style, utilising. every gap between heavy drops as the driving rhythm throughout. Hypnotic, bare-boned, kick-clap matched by subtle distortions, Kraviz is practically royalty and we cannot wait to welcome her back.

After a hugely successful open night, we can safely assume that what lies ahead will bring lasting prosperity to Manchester’s night culture.