One of Scotlands biggest electronic music festivals - Terminal V returns to Edinburgh over the Halloween weekend this year, for an unprecedented rave event.

Launched back in April 2017, what was originally a one day event held over two stages, has now grown into one of the largest and most unique music festivals, found anywhere across Europe. With Terminal V now branching out globally, with the launch of their new Berlin event for 2022, Edinburgh remains the flagship and home of the brand with thousands now flocking to the event from all over Scotland and beyond.

Bringing together both the techno and house community once more, the biannual gathering now plans to host its first ever two-day event on the outskirts of the Scottish capital, at the Royal Highland Exhibition Centre from Saturday 30th October - Sunday 31st October 2021.

Taking residence of the UK's biggest indoor venue for a spectacular 48 hours of live dance music, those in attendance will be spoilt to a selection of formidable performances from some of the worlds most in-demand electronic names, alongside a host of emerging and exciting new talents. 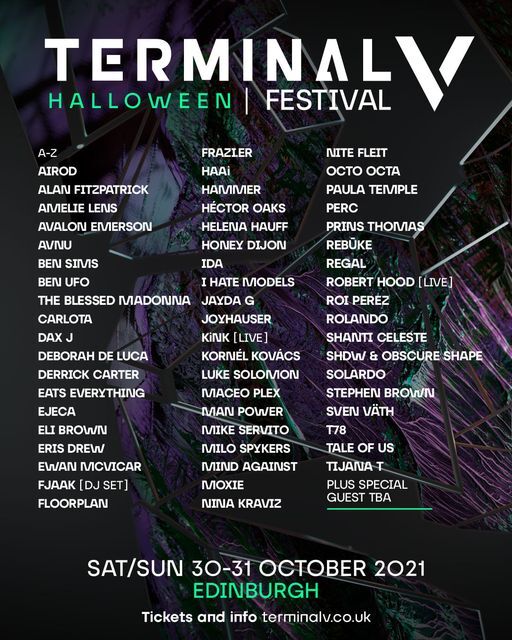 Expect a blistering soundtrack from a real who's who of the modern underground dance scene - from the likes of techno empress Amelie Lens, HAAi, Honey Dijon, The Blessed Madonna, Octa Octa, Jayda G, Rebuke, Floorplan and Maceo Plex to name a few - alongside mind boggling, high-end stage production and much more.

A party that's been a long time in the making, this years bigger and better-than-ever-before Terminal V Halloween edition promises to provide those lucky enough to get their hands on tickets with a once-in-a-lifetime party atmosphere. A gigantic celebration, serving up an experience that will be talked about for years and years to come.