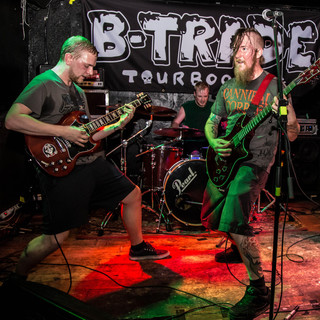 The Boneyard in Derry

Groovebox 'In the park'

Rebuke is a melodic punk / hardcore band from Gothenburg, Sweden that has been around since 2003. Their brand of music has it's roots in the mid 90s californian punk rock scene, but is blended with a bit of hardcore and a few slices of metal riffs, to form a distinct sound.

Lyrically they cover everything from politics to personal topics, always in a sophisticated manner to fit the music like a glove. After being a trio for a long time the band got a new drummer and a second guitarist in early 2008. Over the years they've put out an array of DIY releases, but the latest album "Wouldworks", really stands out as a new top watermark for the band, both performance and sound wise. In 2009 they did one tour of Europe and one to the UK which dramatically has improved their playing skills. In 2010 they signed with Kickass Records in Belgium and Disconnect Disconnect Records in the UK.

Refusing to slow down, or give up over the fact that their music might not be what the radio wants to play, labels want to sign, or even what the kids of today listens to on Myspace while dyeing their hair, Rebuke continues to rage on with their speedy drumming, catchy hooks and heavy riffs. See you in the pit! Read more on Last.fm. User-contributed text is available under the Creative Commons By-SA License; additional terms may apply.

Rebuke has been mentioned in our news coverage

Here are the latest Rebuke mixes uploaded to Soundcloud.

Do you promote/manage Rebuke? Login to our free Promotion Centre to update these details.