» News and Features » Skiddle Record Club: Week 4 - James Arthur - Back From The Edge

Skiddle Record Club: Week 4 - James Arthur - Back From The Edge

Welcome to week four of the Skiddle Record Club - a place for the people behind the scenes at Skiddle to share the music they love, firstly with their colleagues and then with you, the reader.

Last week, I, Jonny from Account Support took the record club to its loudest place yet, with 'The Great Annihilator by Swans. The record/band won themselves some new fans, with some participants finding the music "hypnotic", "sleazy", "dark" and "stunning", while others were more than a little put off by its repeating rhythms, sombre vocals and even creepy, in some places. It finally came to rest in 2nd place on our leaderboard, with a score of 2.7/5, pushing Calvin Harris to 3rd, but leaving Grouper in the top spot (for now...). Read more about the record that earned the quote "It's like one of those led zeppelin records that you play backwards to hear the demonic message, except it's going forwards" HERE!

For week 4, the Record club heads to its poppiest place yet, with a record chosen by Ell of Customer Support. Will it prove popular amongst the team? Read on to find out...

Album: James Arthur - Back From The Edge James Arthur, born in 1988, is a British Singer/songwriter, who shot to fame thanks to a little TV show called The X Factor (RIP, lol), which he won back in 2012. As was tradition back in its prime, James' first single was a UK number 1 and to date has sold 2 and a half million copies... Not bad going for the streaming generation! The X Factor wasn't James' first attempt to break into the music industry, however; his first forays into music actually came in the form of progressive, experimental rock bands, such as 'Moonlight Drive' and 'Cue The Drama'. In 2011, James went solo, releasing his music on Soundcloud, before making the decision to apply for the reality show in 2012. In the years following the release of his debut, self-titled album, James went through a number of controversies, not least of which was a "homophobic" dis track, aimed at rapper Micky Worthless. Sales plummeted and James parted ways with Simon Cowell's "Syco Music" label. However, in 2016, James returned with his second album, "Back from the Edge", a record that sought to tell James' story of battling personal demons.

The album debuted at number 1 on the UK album charts and has been certified platinum in the UK; not bad for the winner of a reality show. In fact, many ex-factor contestants would KILL for a platinum record... Some of them may have? That's probably libellous actually and I withdraw that comment. Digital Spy were very positive of the record in their 4 star review, claiming that "This is the winner we all wanted." The record received relatively positive reviews from numerous outlets and pointed to James Arthur regaining credibility, despite his past mishaps. Rate Your Music, however, has the record scored at 2.44/5, which is our lowest RYM score of the record club so far.

"I listen to [the album] most days," says Ell, when asked why she selected Back from the Edge for the record club. "[I] feel as though it caters for every emotion someone can be feeling" she claims of the emotional variance of the record. But what emotions did it bring out in the rest of the club, as we all sat down this week and listened to James coming Back from the Edge?

What happens when you bring an album like this to such a diverse group like the one we have at Skiddle? Well, it brings out some glowing comments, and some... not so glowing comments... Let start with this one - "Offensively bland and devoid of any nuance -  'Back From The Edge' is the po-faced ramblings of a man so enamoured with himself that the cover alone brings on bouts of nausea." So... I think they didn't like it? I could be wrong, but... Following suit, another listener claimed, "His voice was an absolute irritant, his lyrics are atrocious, the production is bland and lifeless, each song is a clone of the one before it." Again, this album probably won't be on their Christmas list...

The "less harsh" negative comments focussed more on the album's repetitiveness and production values, which some found to be "A bit repetitive and predictable." "The album could have been cut down to 10 pretty solid pop songs, but 17 tracks is a really crazy shout when they all sound so similar," said one listener, in this vein. Another agreed with this sentiment, but also stated that though the songs were similar, they were nothing offensive (unlike one track released by James in the past...) and therefore wasn't overly bothered by this fact.

"Squeaky pop album, his voice would be much more suited to something a little rockier/heavier."

"The songs were overly romantic and emotional."

"There's nothing here we haven't really heard before which knocks a few points off for me."

"47 minutes and 44 seconds of landfill, homogenous pop was one of the most unforgivably boring pieces of music I've heard."

Phew... That was a bit rough... But alas, others in the club enjoyed their time spent with Back from the Edge, with many of the "Would you listen again? Yes"ers scoring the album 3, 3.5 and even 4 stars. The majority of the positive reviews picked up on James' clearly impressive vocals talents. "I was pretty impressed with James Arthur's vocal range and skill," said one listener, backed up by this comment; "He has a nice voice and cute lyrics." "Some of the poppier, more upbeat songs have pretty nice hooks and he's clearly a very talented vocalist, the range is amazing"

Despite the nay-sayers, some found pleasure in his lyrics, with one stating that they were "Glad James has managed to find a release from his troubled past." One listener seemed to really pick up on the messages James tried to convert with his words; "Intently listen to the lyrics and clear messages throughout the songs."

"I liked the song lyrics and the first three songs had a good beat. Not my usual choice but didn't hate it!"

"Some good songwriting that doesn't always follow your typical structures, making way for some nice build-ups and key changes bringing a kind of theatrical swing to some of the tracks."

"He has a fantastic voice and his singing ability is excellent." 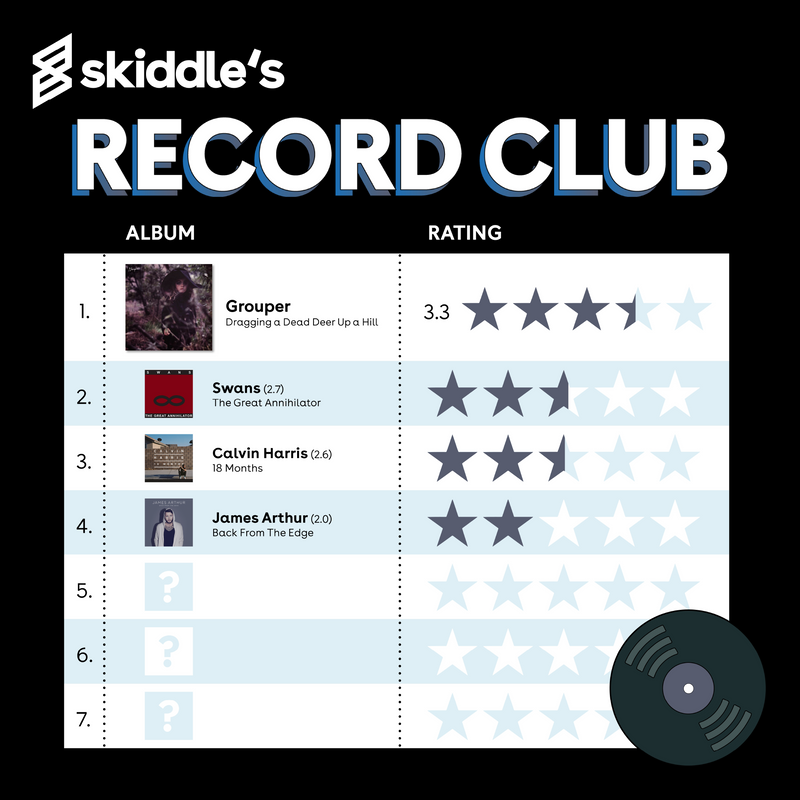 The results are in! 'Back from the Edge' scored an average rating of 2 stars from the Skiddle team, meaning Grouper remains unmoved for 3 weeks now at the top of the leaderboard. I must say, I'm somewhat surprised that a record as dark, sombre and dreamy as 'Dragging a Dead Deer Up a Hill' has managed to maintain its winning streak for this long! But will next weeks choice dethrone it?

Next week's record choice comes courtesy of Jamie Scahill, of the Marketing Team.

Reading and Leeds Festival to announce lineup news in December