Halloween is just a couple of weeks away now, and we're sure that you have everything planned and ready for a session of the sinister variety. But, while you may be solely focused on getting the competition-winning costume, you might want to cast your mind to later in the year, as there are already lots of Christmas and New Year events on Skiddle, already in short supply of tickets.

Below, you'll find festive frivolities, some hardcore raves that will have you skanking your way into 2023, massive Warehouse Project birthday parties, and so much more to sink your teeth into.

So get scrolling through this week's most recently announced events, and secure your tickets now before it's too late... 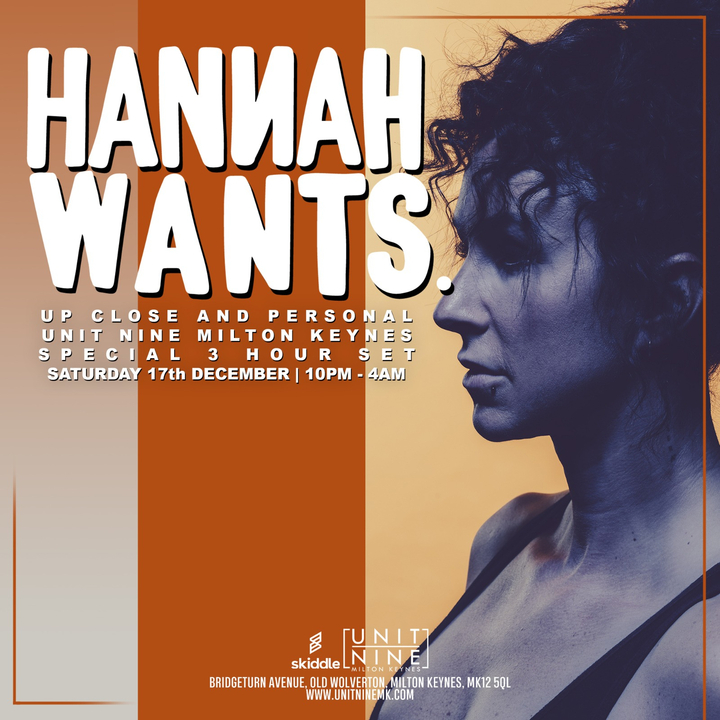 Where: Unit Nine in Milton Keynes

House music is coming back to take over at Unit Nine this Christmas, and who better to do so than the self-taught turntablist to global star, Hannah Wants? With a career spanning beyond a decade, the acclaimed producer regularly releases on some of dance music’s most well-respected labels, with a touring schedule that takes her to the biggest clubs and festivals in the World

This December, Wants will be taking over for three whole hours with a set crafted on a focused sound, pushing boundaries and on a mission to never be pigeonholed to one particular style of house music. This one is bound to sell out so we wanted to get you on it early, as there's nothing worse than pos-rave fomo.

Worried About Henry Ft Chase & Status / Kings Of The Rollers 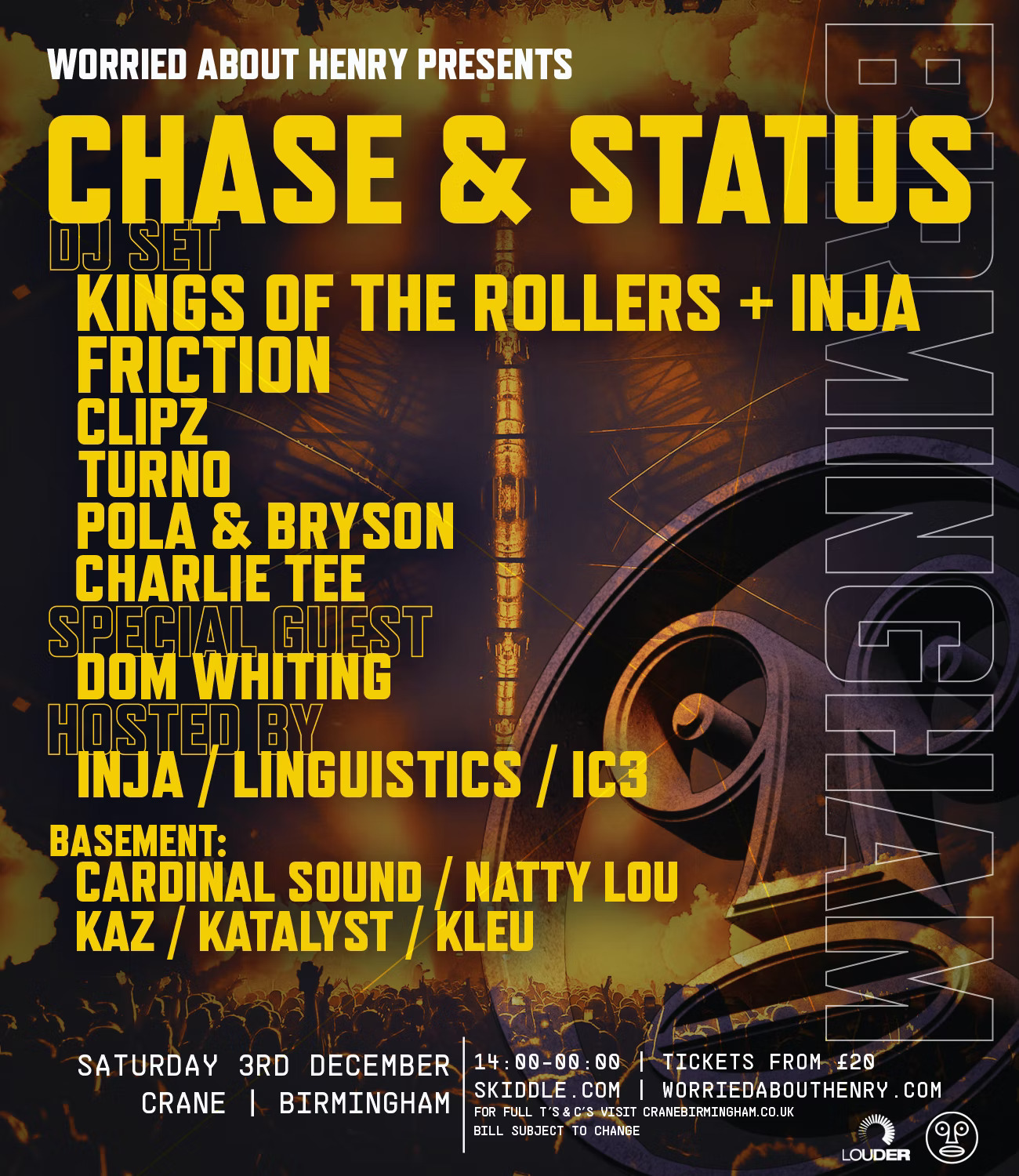 Where: Crane in Birmingham

Touching down in Birmingham this December the Worried About Henry group are set to take over and blow the roof off with a barrage of basslines by Chase and Status and King of the Rollers. The two hardcore icons are joined on a stacked lineup of DnB talent, which includes Friction and Turno, this one isn't one to be missed for the Brum ravers.

Founded in 2014, Worried About Henry have gone from strength to strength bringing multi-genre bass lineups to the very best venues across the UK. Having hosted WAH shows with The Warehouse Project in Manchester annually and programming festival stages such as Parklife, these guys know how to put on a party. So, get them gun fingers locked and loaded, they're going to have a lot to do this December.

One of the most important and influential names in the UK techno scene, Patrick Topping, will be heading to Liverpool with his electronic label TRICK and taking over the grounds of Blackstone Street Warehouse for a night of the grooviest beats and the best vibes.

Topping has won a whole host of accolades for his skills behind the decks, and through TRICK has constantly pushed forward the best up-and-coming talent in the scene. His new tracks 'Keep on moving' and 'Shake my booty' will undoubtedly be spun, and we for one cant wait to be amongst the first to hear them live.

The last time TRICK made a pilgrimage to the Merseyside, it was a sell-out event, and we don't want you to miss out this time round, so click that link and sort them tickets before it's too late. 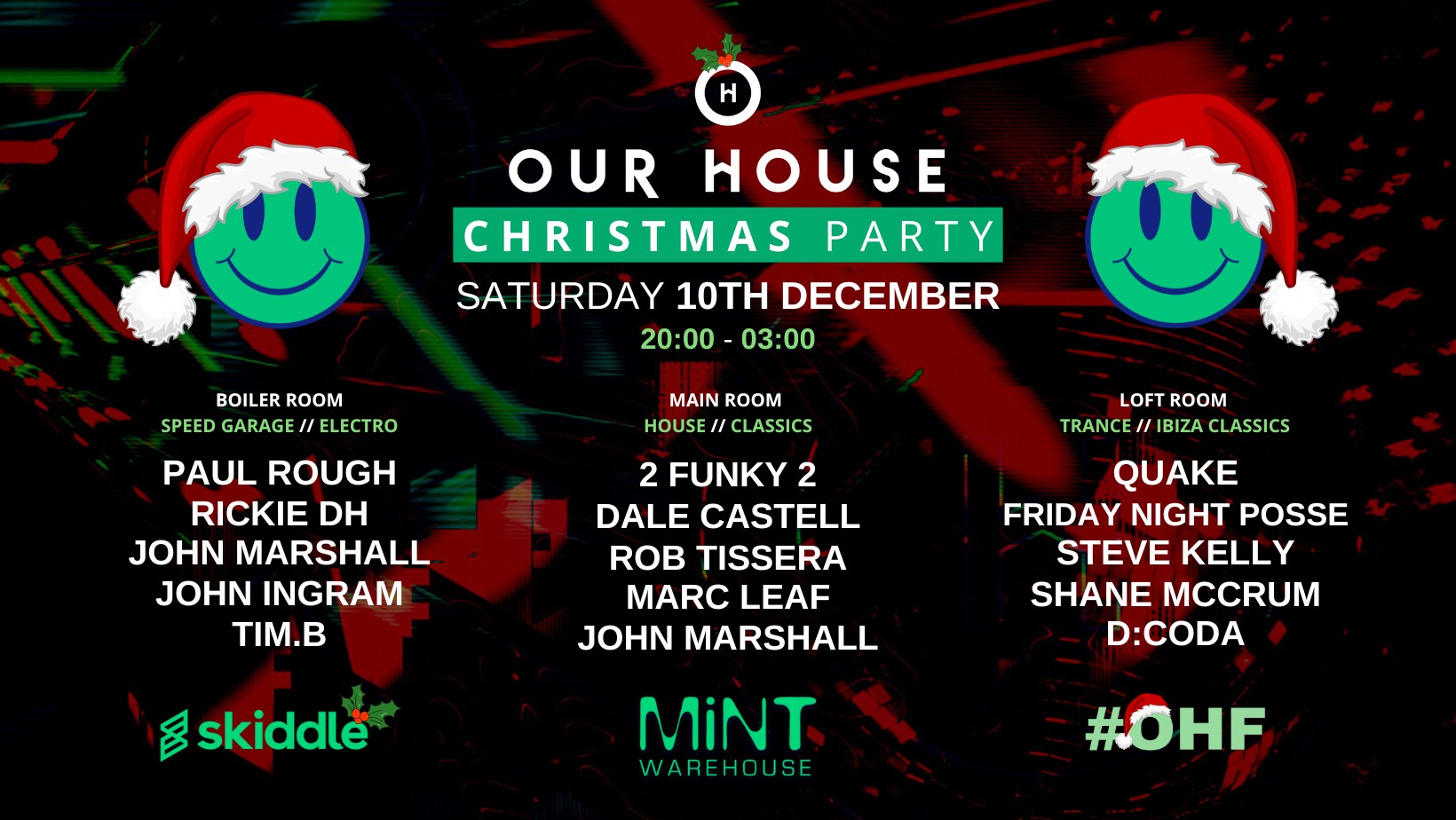 Where: Mint Warehouse in Leeds

The much-loved Our House Family are making a momentous return to Mint Warehouse for a good ol' fashioned festive knees-up this Christmas, with three rooms of House, Old Skool, Speed Garage, Vocal Electro, Trance & Ibiza Classics that are primed to send the crowd into a feverous boogie.

Marc Leaf, 2 Funky 2, and Dale Castel are some of the highlight names amongst those behind the decks, and with such names, it's bound to be both a bloody good time, and a quick sellout, so if you're more inclined towards the white rose, then this is the Christmas party that you need to be at. 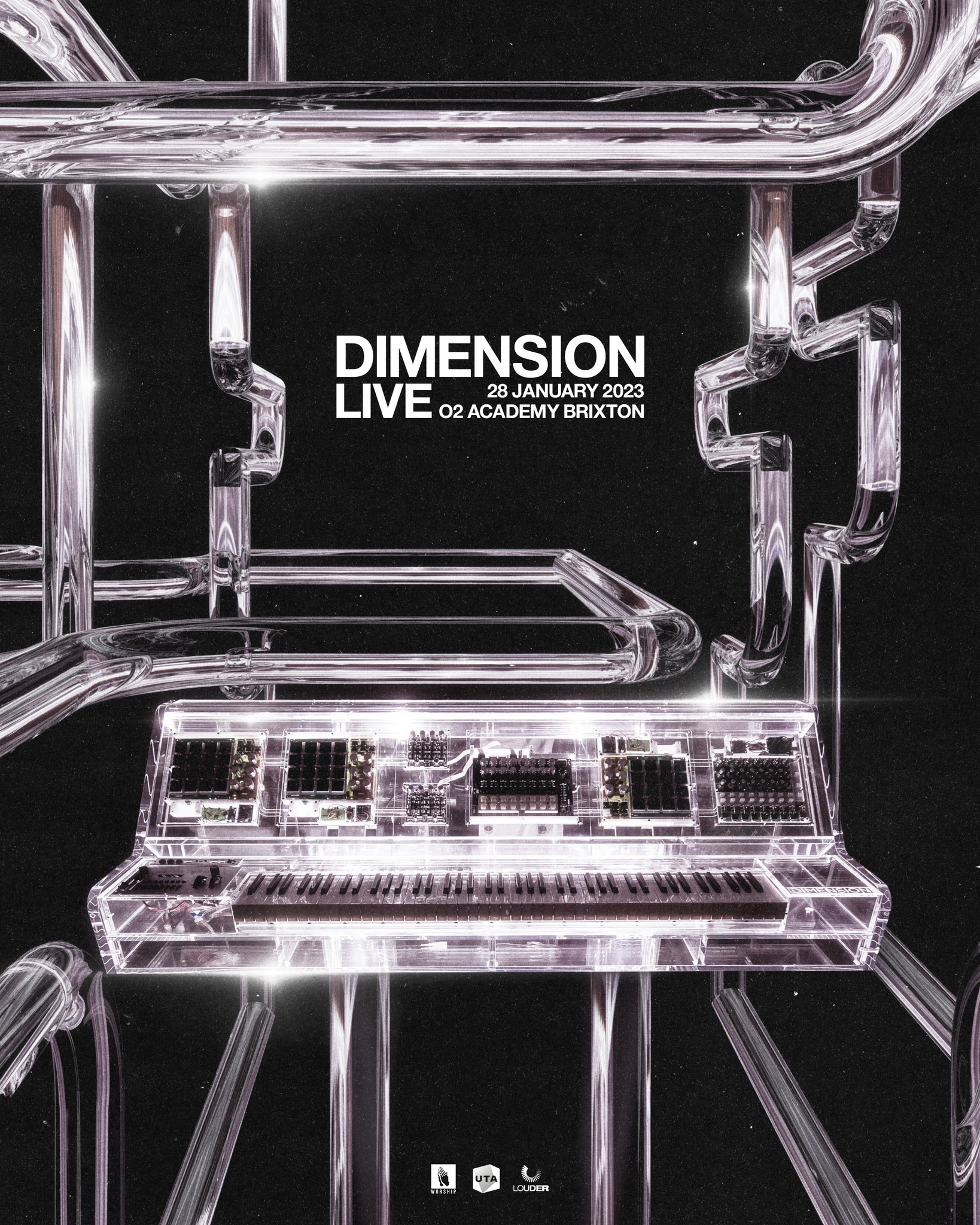 Where: O2 Academy Brixton in London

After the release of his debut album, ORGAN, which reached #1 in the UK Official Dance Chart, and a string of new singles in 2022, Dimension is set to take over one of London's most iconic venues in the O2 Academy Brixton for the latest incarnation of his awesome live show.

With every live performance, the man behind the decks strives to push the boundaries of what is possible in a genre-bending, immersive, and live environment, and this time people can expect no less. So, start out 2023 in the best possible way and get on your dancing shoes as this event is going to be momentous. You'll regret it if you don't go, we know we would.

Road To Victory at The Depot Mayfield 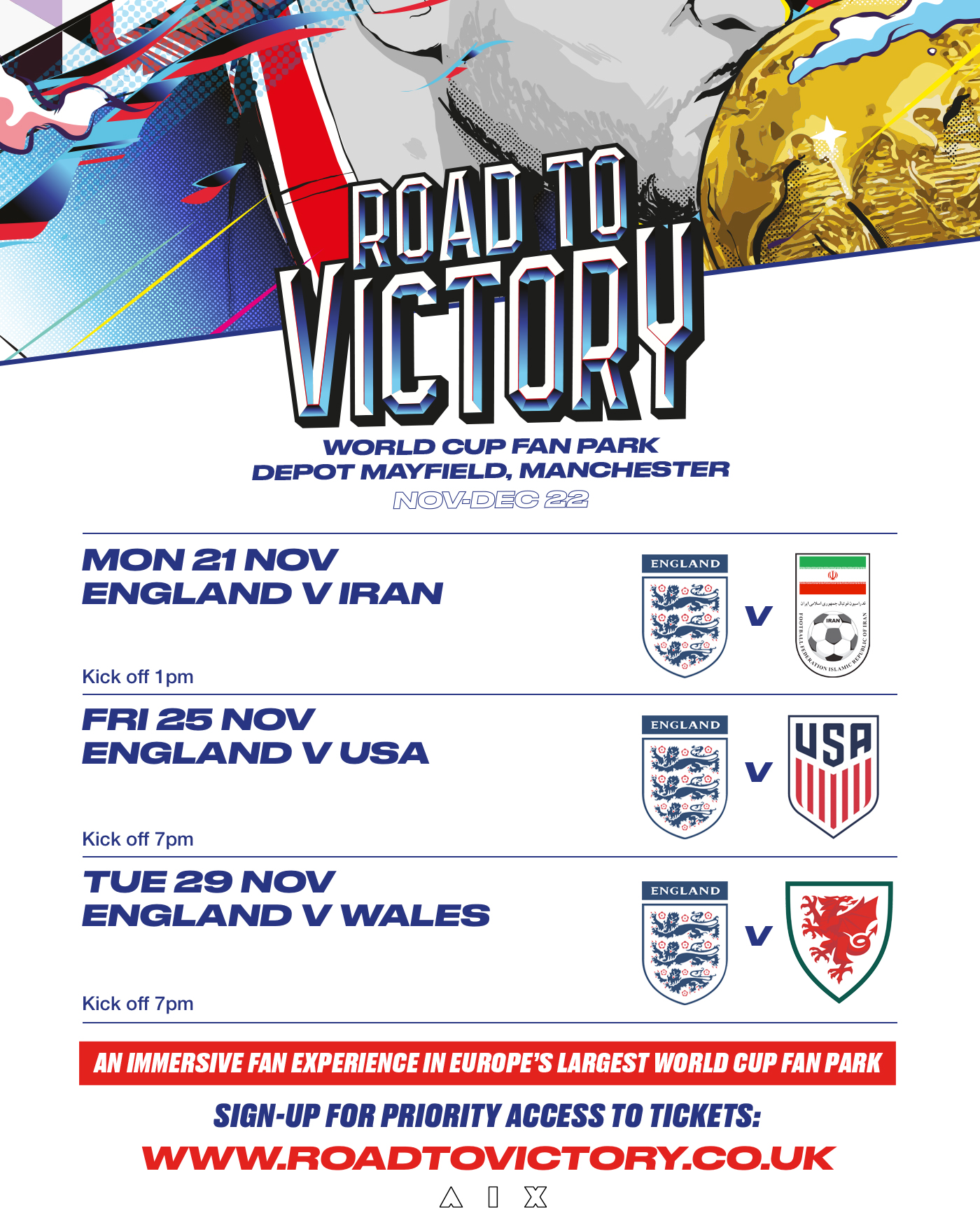 When: Dates listed above

Europe's largest fan zone is making its way to Mayfield Depot in Manchester this World Cup season. Road to Victory promises immense production combined with the latest interactive technology to deliver an incredible multi-sensory football experience this winter. Featuring a massive 140 square meter screen and a fully immersive light show, there will be an electric atmosphere for England’s biggest World Cup matches, for the whole competition.

With over 100,000 square feet of World Cup action, Road to Victory features three rooms, including two standing rooms, a VIP area with space for 200 guests and up to 1,800 seated in the main room at Mayfield Depot. From the second fans walk through the Depot's famed tunnelled entrance, reimagined as a stadium concourse, the venue promises to bring all the best vibes. There will also be pre and post-match entertainment with DJ’s, hosts, quizzes, special guests, competitions and much more.

Find tickets for Road To Victory at The Depot Mayfield - here 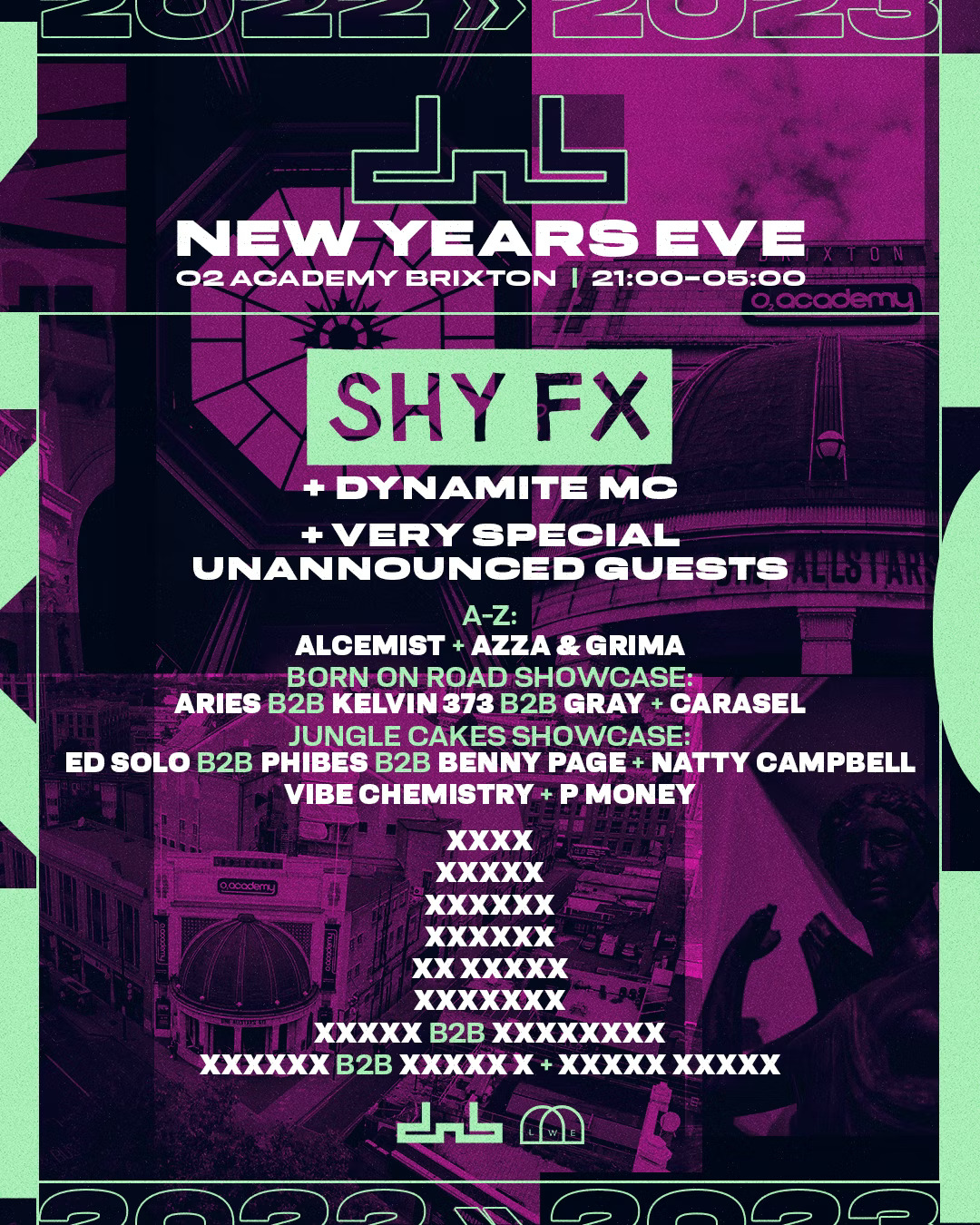 Where: O2 Academy Brixton in London

DnB Allstars are pretty much exactly what they say on the tin, and have treated the UK hardcore faithful to a bucket load of bouncing nights that have left many with the ringing ears of the best kind. Its latest iteration is set to take over the Hallowed grounds of Brixton's O2 Academy for a New Year's rave to end all raves that is set to cap off 2022 with a bass-filled bang.

Bassline superstar Shy FX is primed to headline proceedings with a stacked undercard featuring the likes of Alchemist and Phibes, as well as an army of unannounced DJs to fill out the bill. We can't think of anywhere we'd rather be this New Year than in a sweaty pit of strangers jumping about in a joyous tumble. Get on it. 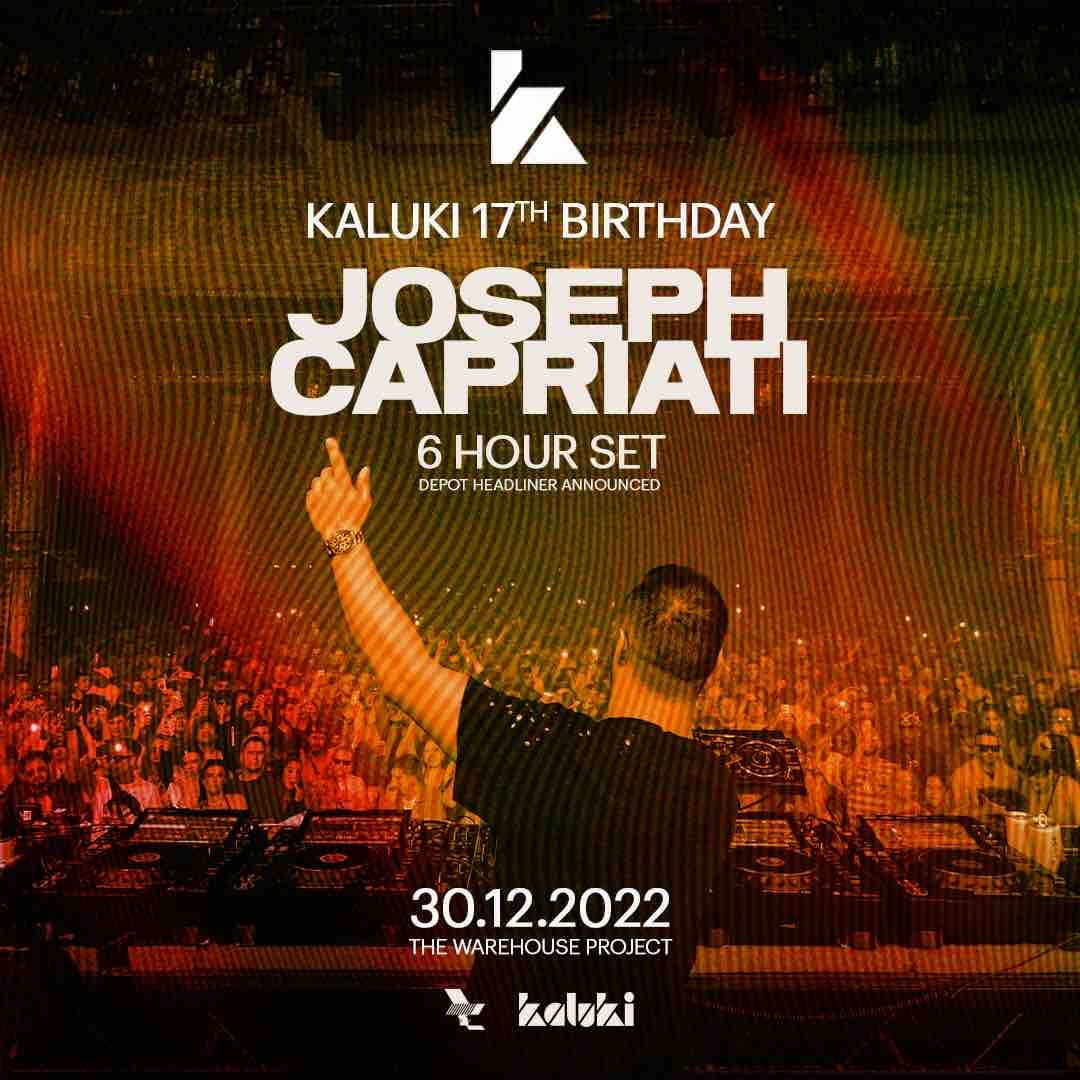 Formed in 2006 from a Manchester basement in the ashes of the iconic nightclub Sankeys Soap, Kaluki has delivered parties with everyone from proven heavyweights or future stars of the electronic music scene. Now an established name on the circuit, the label never missed with its techno bashes, and for its 17th birthday, label favourite Joeseph Capriati is set to send Depot (Mayfield) into widespread dance.

The WHP event is bound to sell out, as they always do, so you're going to want to sort your tickets asap. Make sure to keep your eye out for the rest of the lineup, as it's bound to deliver. But for us, if Joe Cap is there, we need no more convincing. 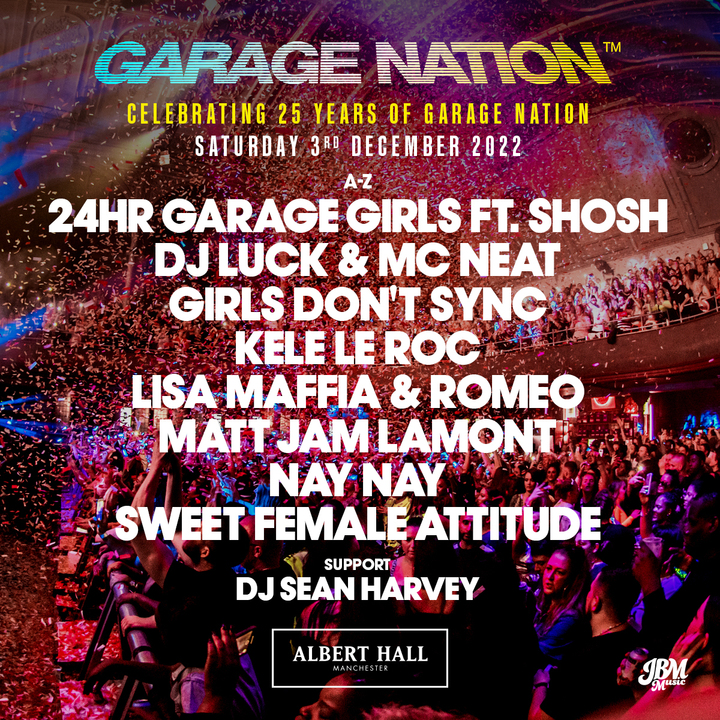 Heading to Manchester’s beloved Albert Hall for another instalment of the renowned ‘Garage Nation’, this all-star lineup looks set to bring yet another phenomenal night to a capacity crowd of party people in the northern capital. With performances from DJ sets from Matt Jam Lamont, 24 Hour Garage Girls Ft Shosh, Girl’s Don’t Sync & special live performances from Lisa Mafia & Romero from So Solid Crew, this one's gonna pop off.

Raising the industry standard within the UK dance scene throughout the years, JBM Music have quickly become a formidable force renowned for bringing big names with the venues and production to match on every occasion, with Garage Nation continuing this trend for its winter return at the Albert Hall. With tickets already on sale and available here, garage ravers should grab their passes ASAP for what will undoubtedly prove to be another sold-out Albert Hall special. 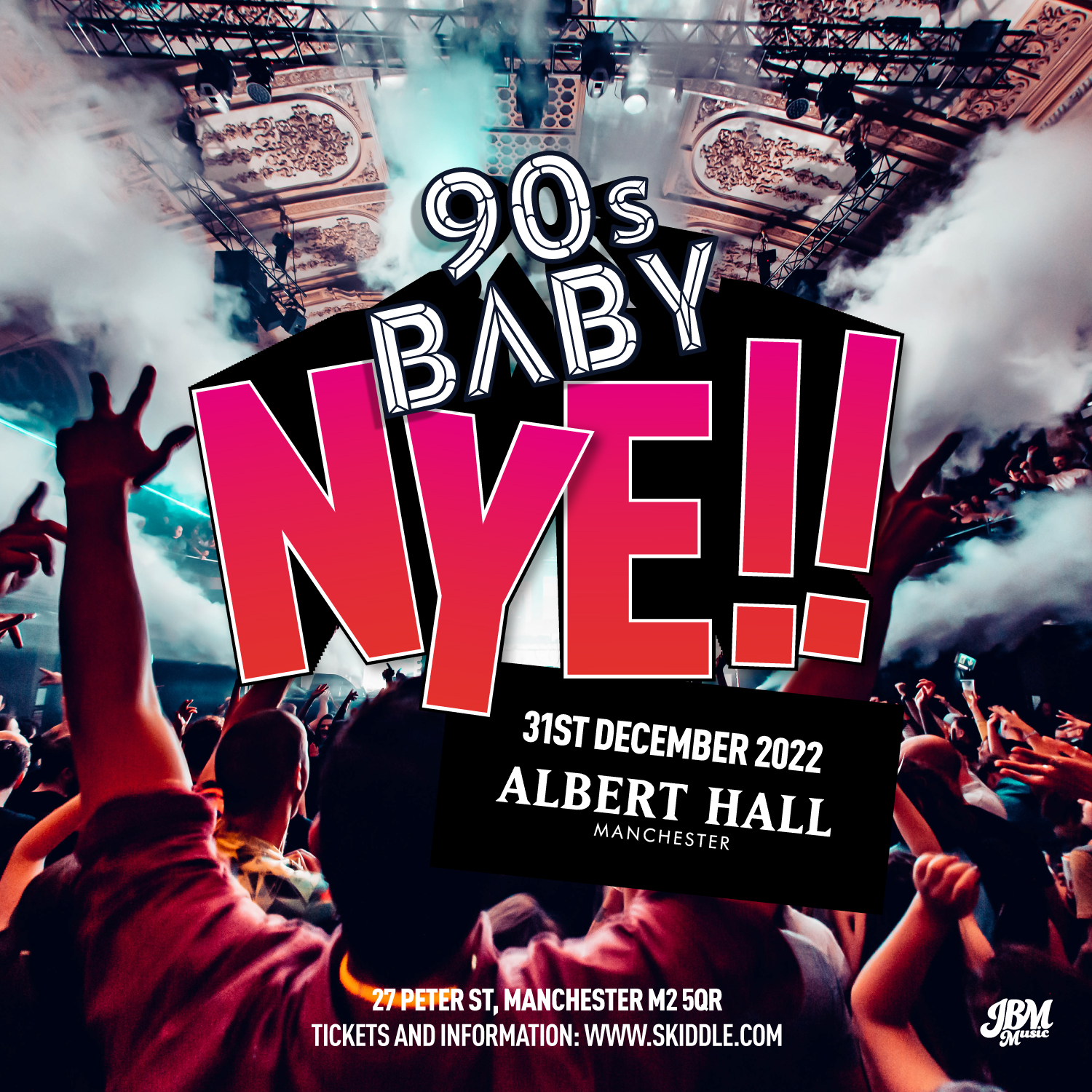 Spearheading the best nostalgia-driven events in the biz, 90s baby consistently delivers nights of the best throwbacks for all the 90s babies to party the night away to. This year, their new years eve party will decent on Manchester's iconic Albert Hall, and promises to bring some of the biggest acts of the era to the stage.

Whilst the lineup hasn't yet been announced, previous events have seen the likes of K-Klass, Aqua, and even 'I'm Blue' icons Eiffel 65, so you just know they're going to bring the bangers that echoed through your youth. So, get your tickets now, as when the lineups are announced, it may be too late!