At the beginning of each and every working week, we help to soften the blow, to ease you back into your routine by supplying you with a long list of fantastic new events to look forward to, and this week is no different!

From summertime festival soirees amidst the epic green vistas of the British countryside to overseas shindigs on the shores of the mediterranean, gigs in your favourite live music venues and so much more - there's a lot to shout about on Mondays!

Check out our pick of the ten best new events on Skiddle - on sale this week - and snag yourself some tickets whilst you can!

(Click or tap on the event titles, artist or venue names below for more) 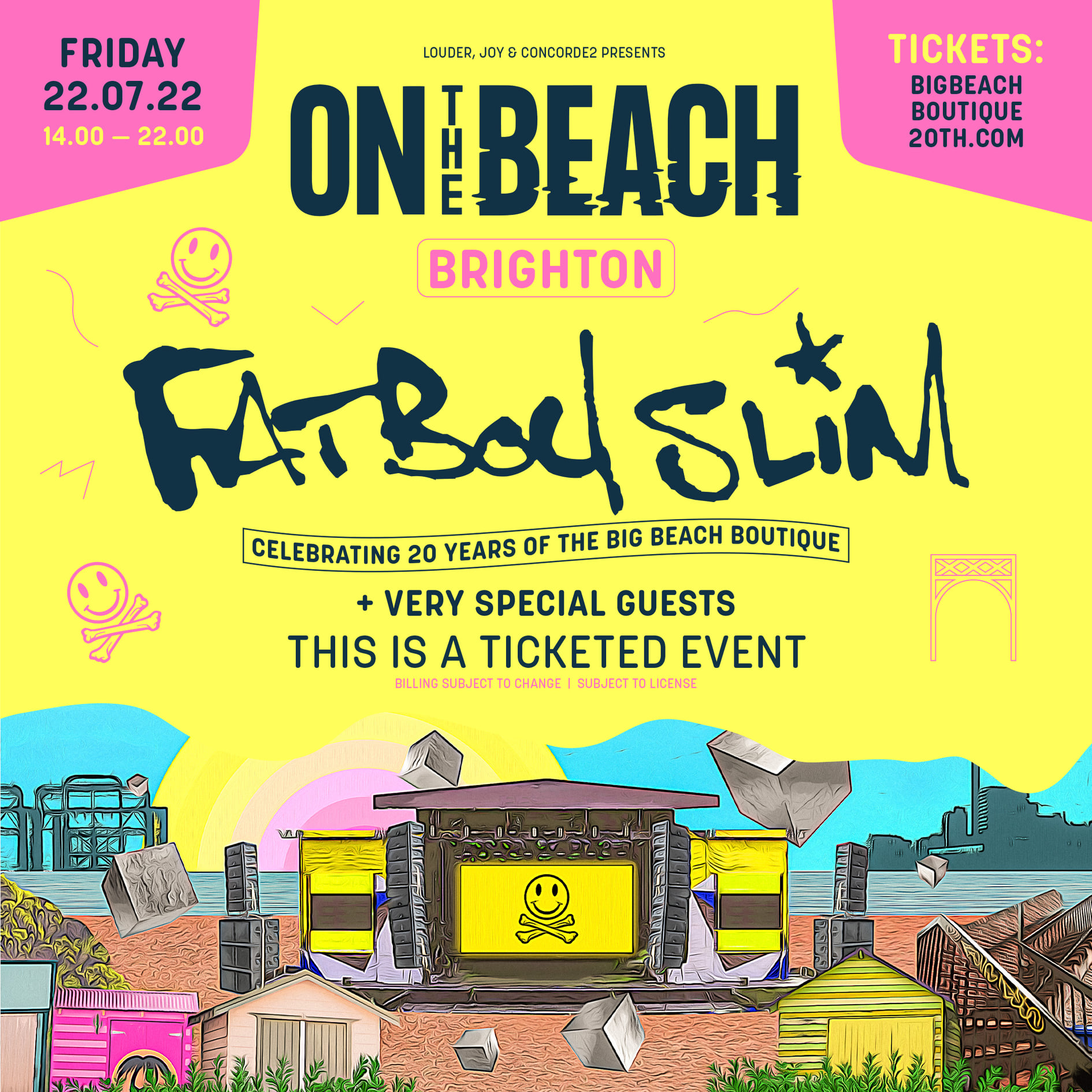 Where: Brighton Beach in Brighton

The funk soul brother, Norman Cook AKA Fatboy Slim, has recently confirmed that he will in fact return to Brighton Beach with his extensive record collection this July, for a very special live performance commemorating twenty years since 'The Big Beach Boutique'.

A free event, The Big Beach Boutique, for those unaware, happened back in 2022 and saw a quarter of a million people piling onto the shores of the Brighton coastline, doubling the population of the city at the time, to catch Fatboy Slim spinning records from his acclaimed back catalogue.

Can we expect to see the same turn out at this summers event? Only time will tell. Catch Fatboy Slim alongside a host of other well known names, yet to be announced. Watch this space.

Find tickets for On The Beach - Fatboy Slim - here 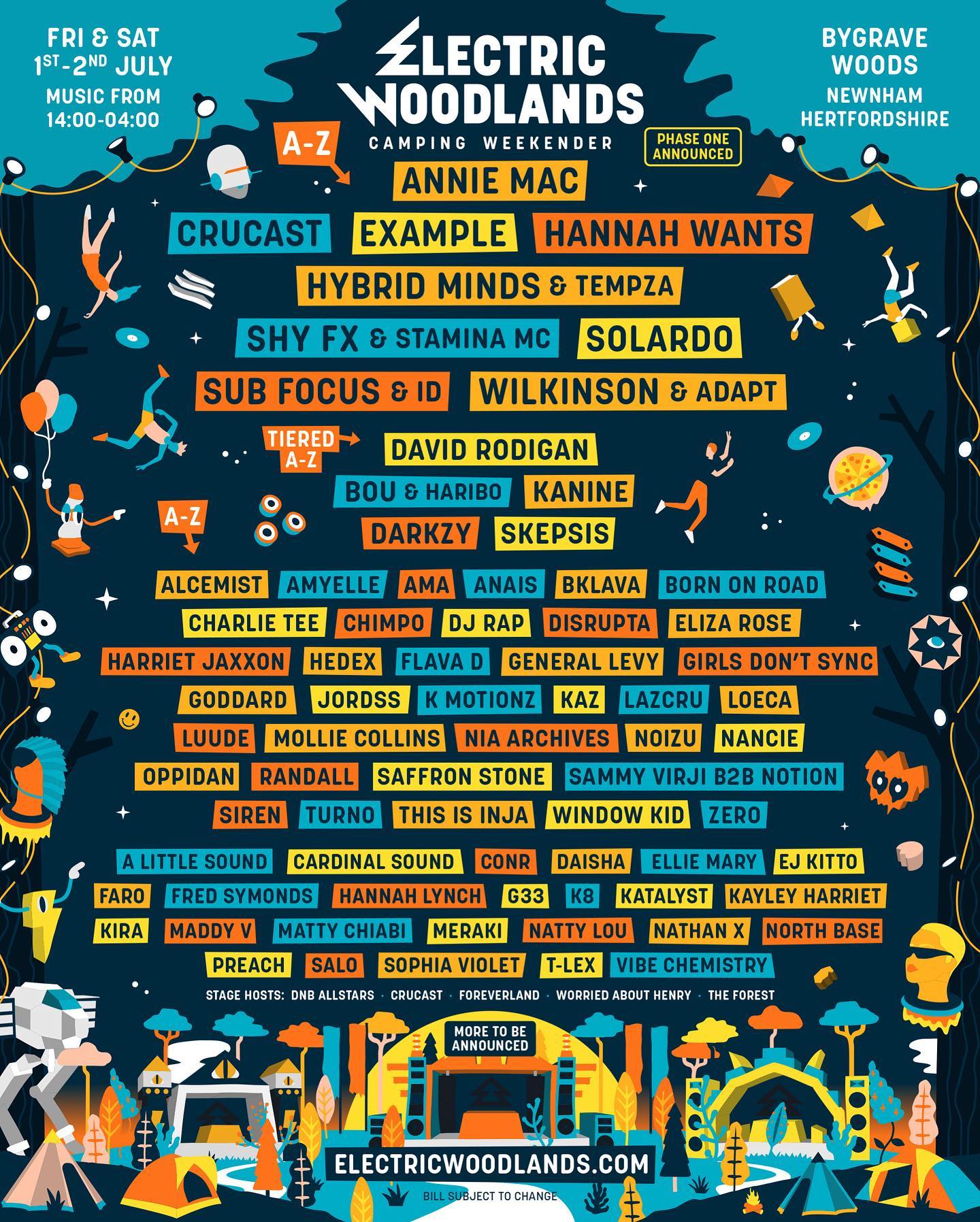 Where: Bygrave Wood in Hertfordshire

Hertfordshire's Electric Woodlands Festival is back in 2022, and this time they're bringing music over two long days and nights!

Set to run over the first weekend in July, the two-day camping edition of the always highly sought-after event will see some of the loftiest names in dance music cranking up the volume, going full throttle and it leaving it all out in the forests of Bygrave Wood.

Click on the link below for tickets and more...

Clubland By The Sea 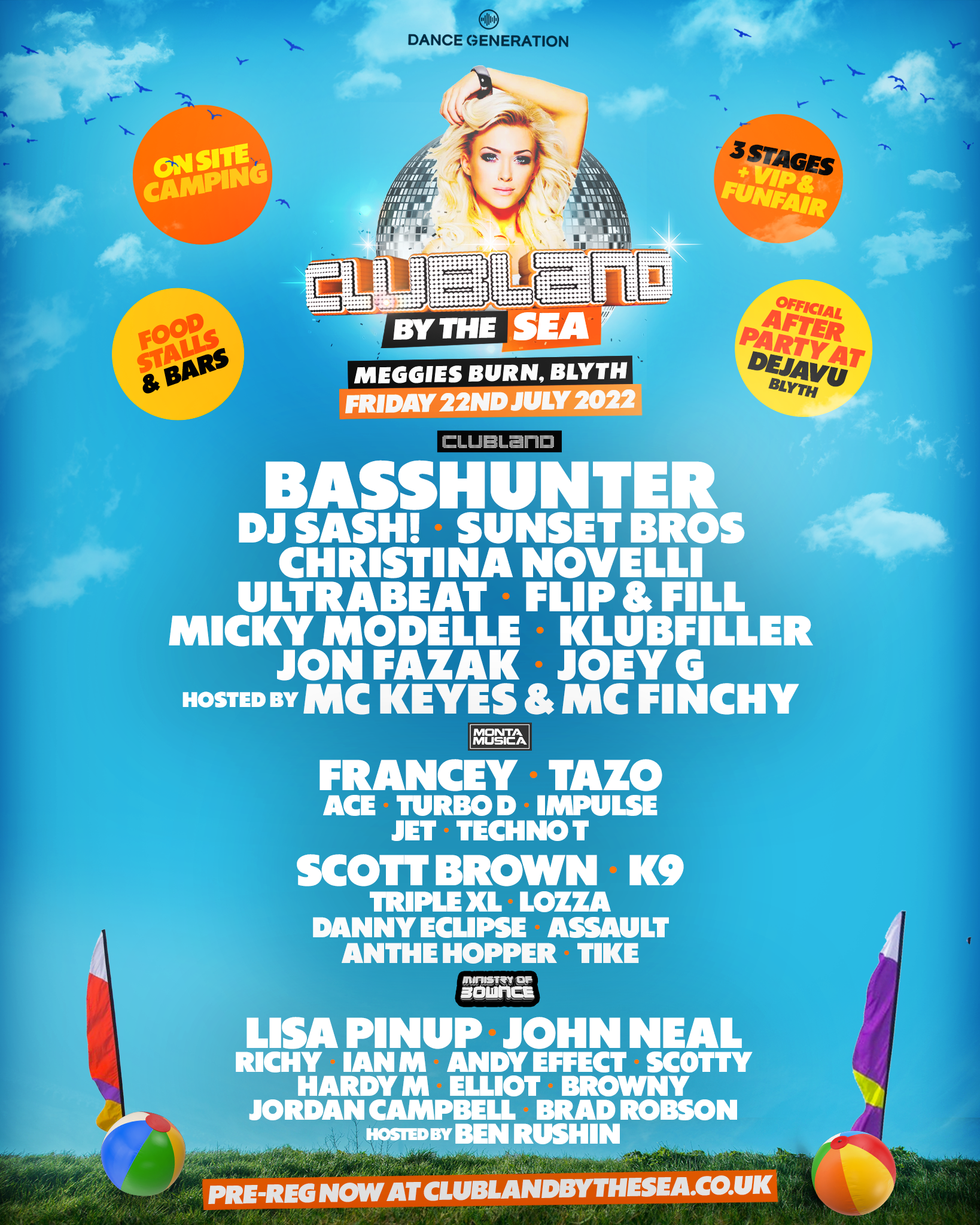 Where: Meggie's Burn Farm in Blyth

Coming to the Northeastern coastline of England this summer, trusted dance brand Clubland are set to deliver their biggest lineup to date at the debut edition of Clubland By The Sea.

Appearing live over the festivals three enormous stages, armed with the very best in lighting and SFX production, are globally recognised acts such as Swedish DJ and producer, Basshunter, one of the world's most successful dance names, DJ Sash and Liverpudlian outfit, Ultrabeat, to name a few.

The one-day camping event will also boast it's own mini-festival village with a variety of food and drink vendors, official merchandise, a funfair and much more. More on the link below.

Find tickets for Clubland By The Sea - here 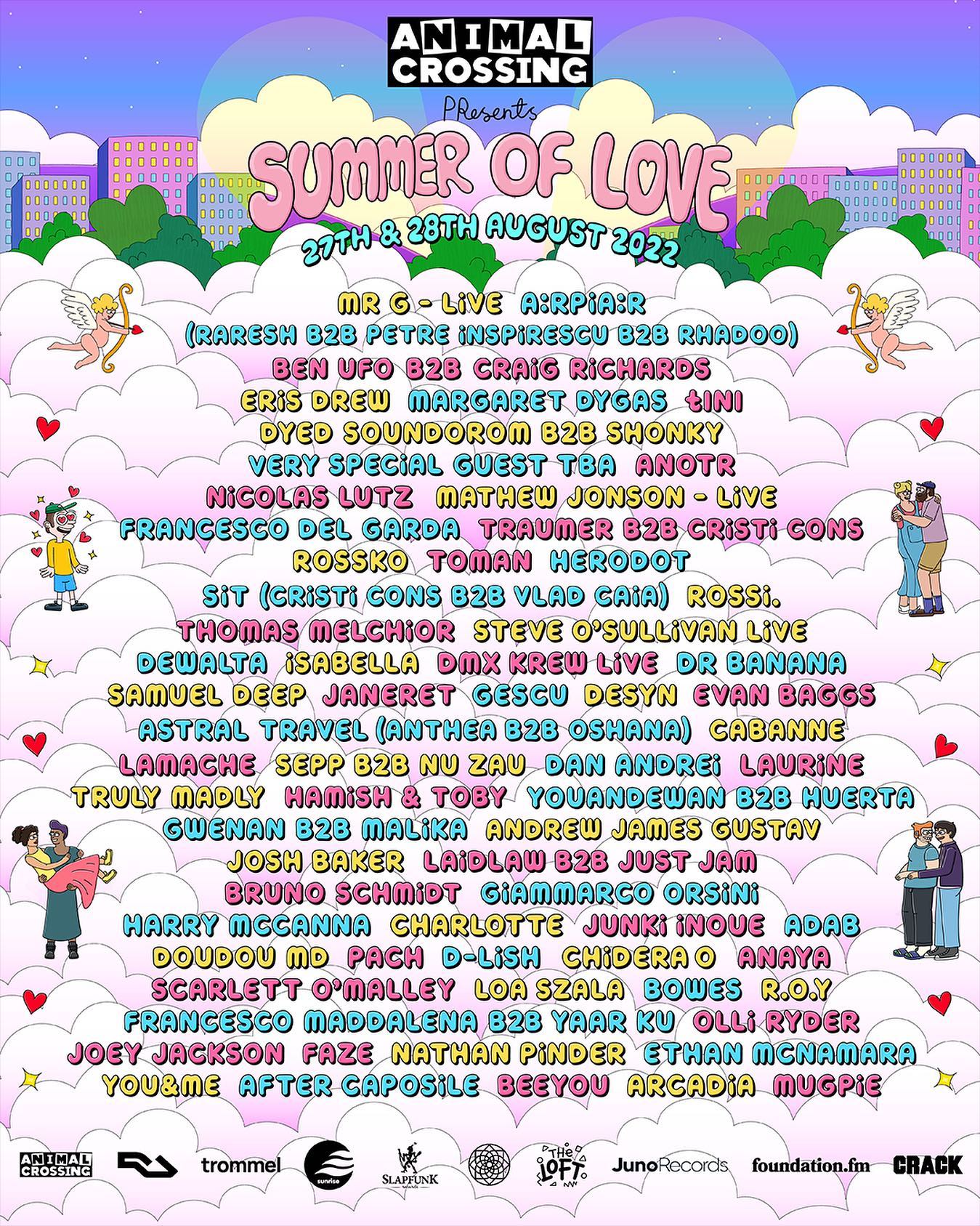 Where: The Love Factory in Manchester

Manchester party-starters, Animal Crossing are preparing for their second ever edition of 'The Summer of Love' festival, taking place in an all-new purpose built venue in a city centre location this August.

Over eighty renowned names have been lined up to create an unparalleled soundtrack for what is certain to be a sell-out event. Among the many names are headliners Mr G, Eris Drew, one of dance music's most adventurous selectors, Ben UFO B2B Craig Richards, Toman, Rosski, experimentalist Margaret Dygas, Traumer B2B Cristo Cons and Dr Banana (See the event poster above for more artists).

Described as the brands biggest adventure to date, the site of the festival, known as 'The Love factory', will house its own wellness cafe, run by Northern Quarter coffeehouse, Feel Good Club, as well as its own record fair and food market. Global dance brands and charities the likes of Mind Manchester, Juno Records, Foundation. FM, You&Me, Crack and more will also sponsor the festivals many stages, over the August Bank Holiday event.

Find tickets for The Summer of Love 2022 - here 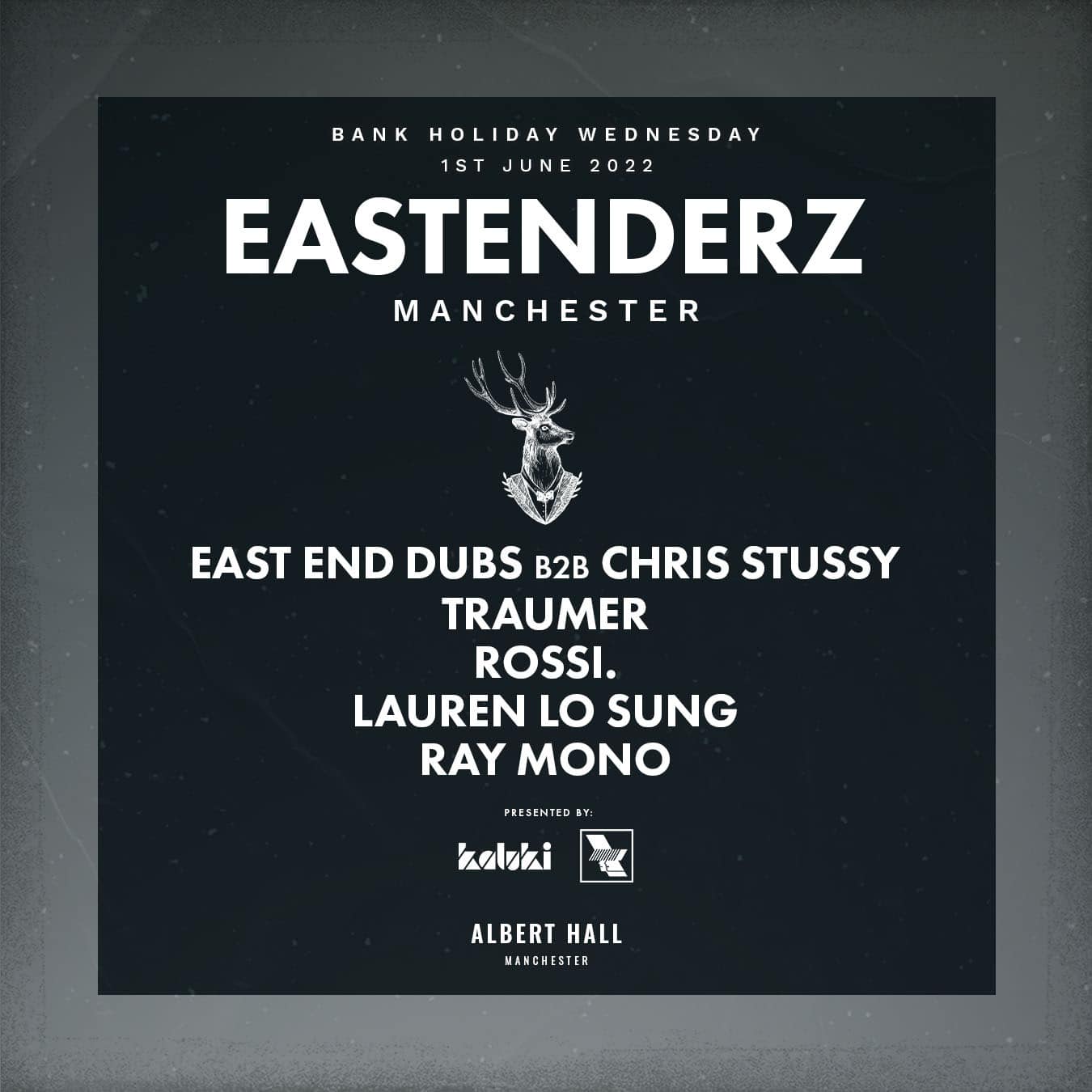 Eastenders record label boss, East End Dubs has teamed up with nightlife experts Kaluki and Manchester's Warehouse Project (WHP) to bring about an unmissable night of raving in one of the Northern capital's finest live music establishments - the Albert Hall.

Breaking in the extended Jubilee Bank Holiday weekend properly, on the eve of Wednesday 1st June, the dark house music selector and producer will welcome a handful of roster talents to lend a hand in entertaining dance fans at inner city summer gathering. Energetic performer, Chris Stussy will take to the stage along with Parisian DJ, Traumer, Rossi., Liverpool's Lauren Lo Sung and Ray Mono.

Tickets are expected to sell out for this one. Act fast and get yours now. 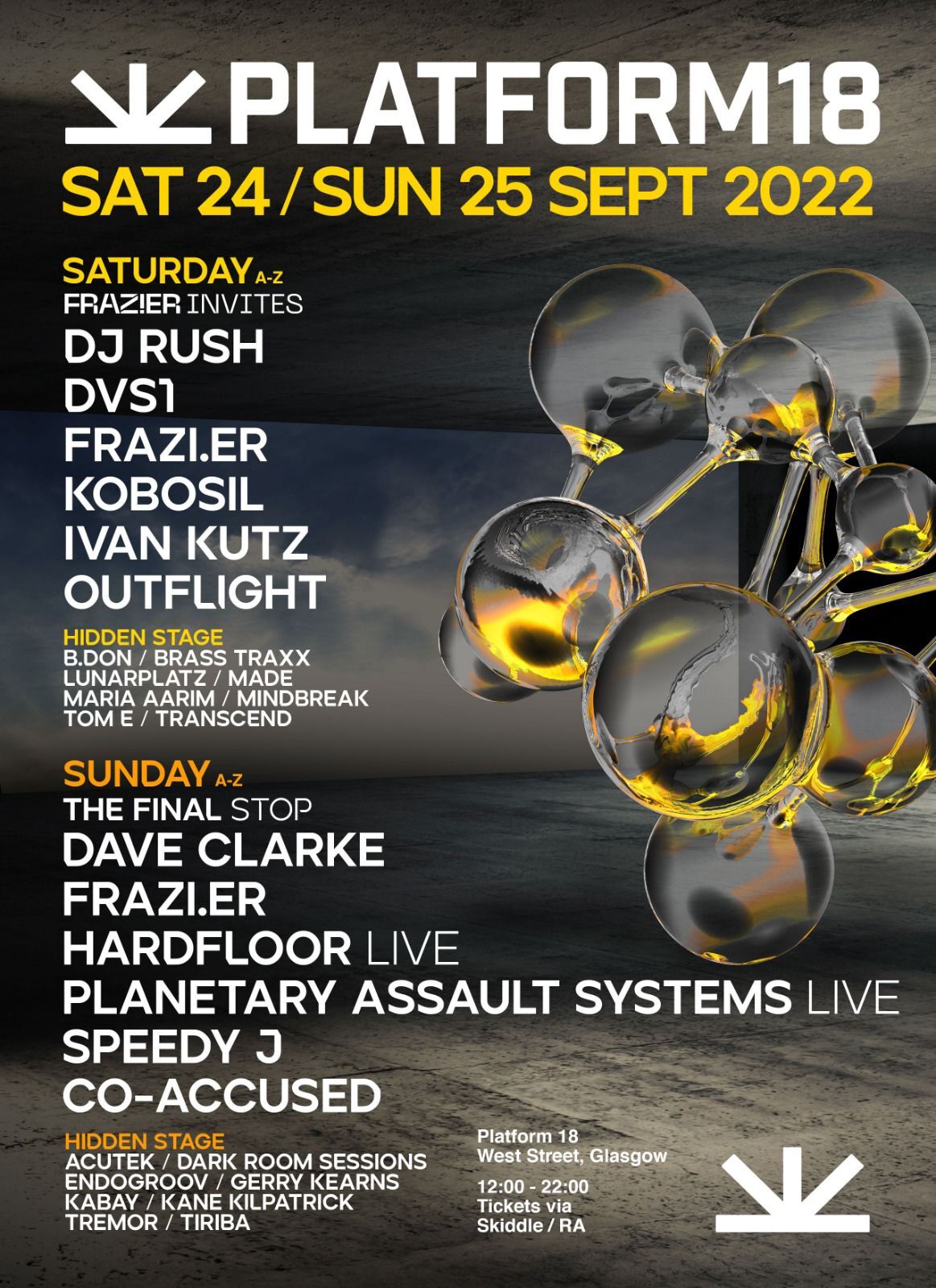 Where: West Street in Glasgow

After nearly a decade of raves under the iconic West Street Bridge in Glasgow, the team behind Platform 18 Festival have announced plans to call time on the popular Scottish dance event, with one final party planned to see the festival off in style.

A HUGE event on Glasgow's calendar each and every year, the festival has become part of the DNA which makes up the culture of the city, bringing global legends and pioneers the likes of Chicago house music legend, Derrick Carter, 'The Wizard', Jeff Mills, and Belgian techno specialist, Amelie Lens, to name a few, to dance fans in Scotland.

So Solid Crew LIVE in concert 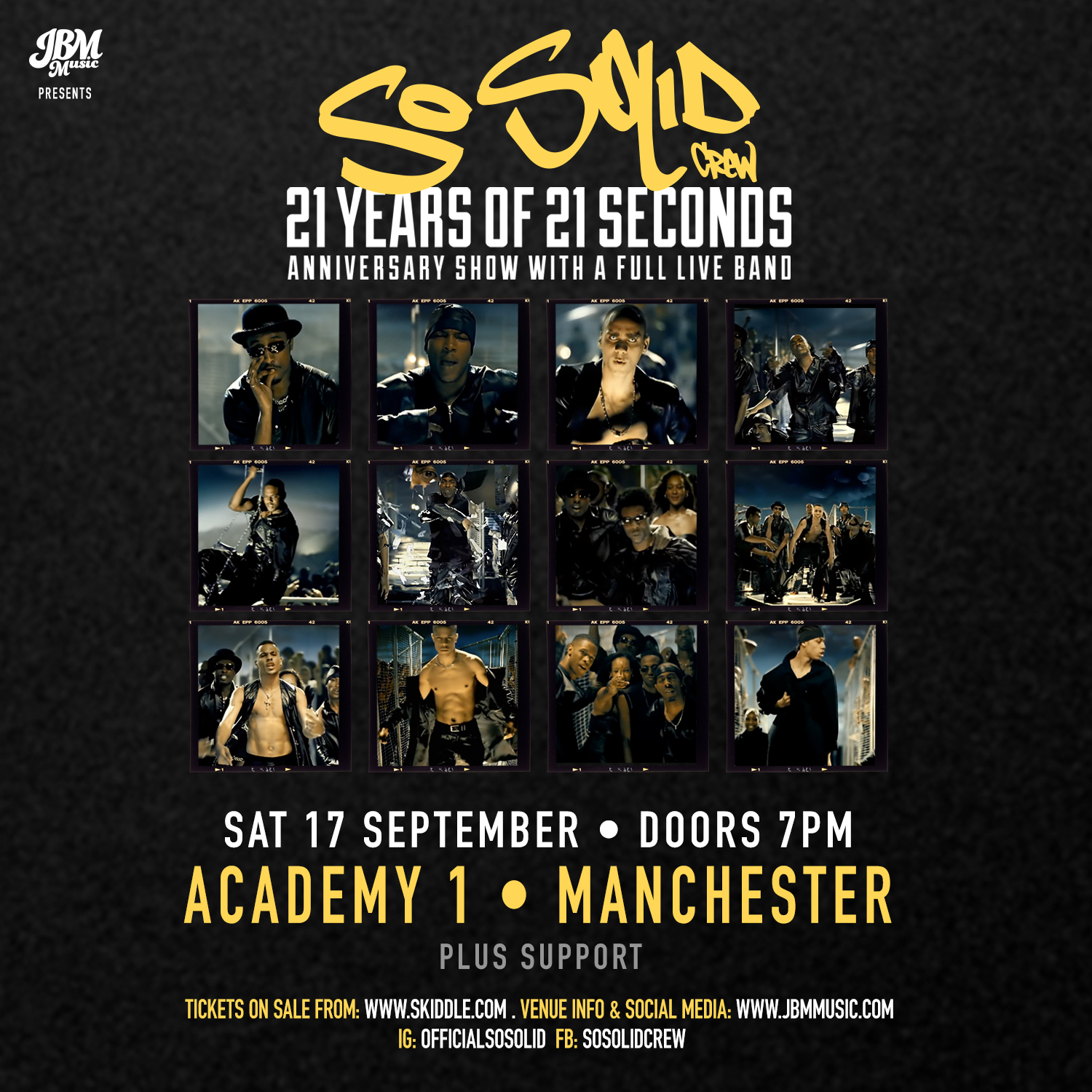 UK garage giants, So Solid Crew will explode onto the stage at Manchester's Academy One this September, landing in the city as part of their forthcoming UK tour, celebrating twenty one years of their UK chart-topping anthem - '21 Seconds To Go'.

The trailblazing collective, who also had top ten success with 'They Don't Know', which peaked at number three, were hugely influential on the British urban scene at the time, bringing a darker edge to garage sound and basically cementing a path for the introduction of grime.

Comprised of some pretty familiar names - from Top Boy actor, Ashley Walters, to garage MC duo, Oxide & Neutrino, and Britain's Got Talent judge, Alesha Dixon - the multi award-winning crew will now lineup alongside a full live band once more, performing a score of some of their many classic, game-changing anthems.

Find tickets for So Solid Crew LIVE in concert - here

Hospitality on the Harbour 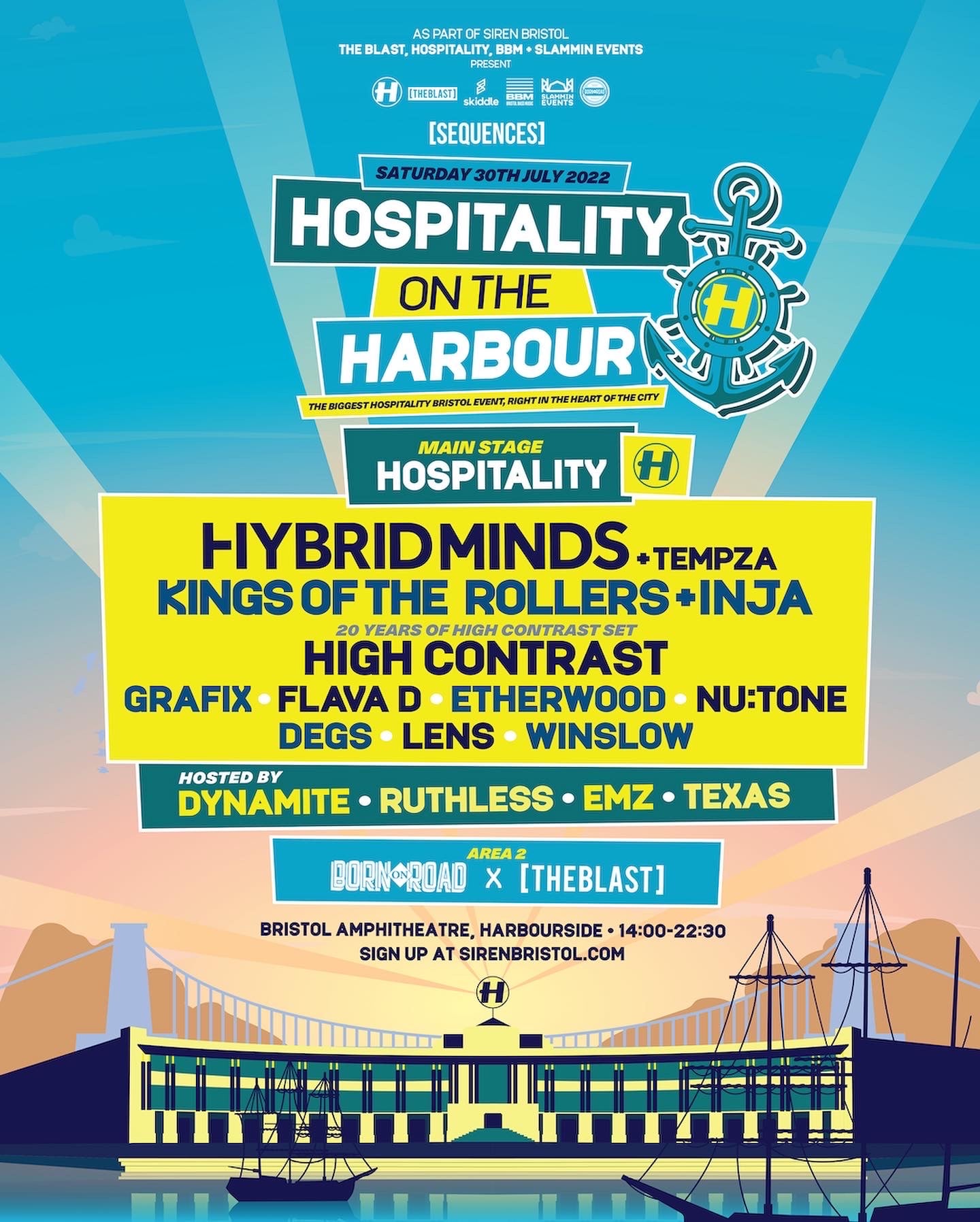 Drum n bass dons, Hospitality have joined forces with Bristol's SEQUENCES - the popular summer event series run by The Blast - to launch a new seaside music event this July - Hospitality on the Harbour.

Having just celebrated 15 years in Bristol last year, the inaugural day party will once again attract a selection of heavyweight names to the south coast of England, for party the likes of which you'll struggle to find anywhere else across the British Isles.

Hybrid Minds, King of the Rollers, High Contrast, Flava D and Grafix are amongst those set to bring the colossal Bristol Amphitheatre alive with the best in breakbeat sounds, backed up MCs Dynamite, Ruthless, EMZ and Texas.

Follow the link below for more details and tickets.

Find tickets for Hospitality on the Harbour - here 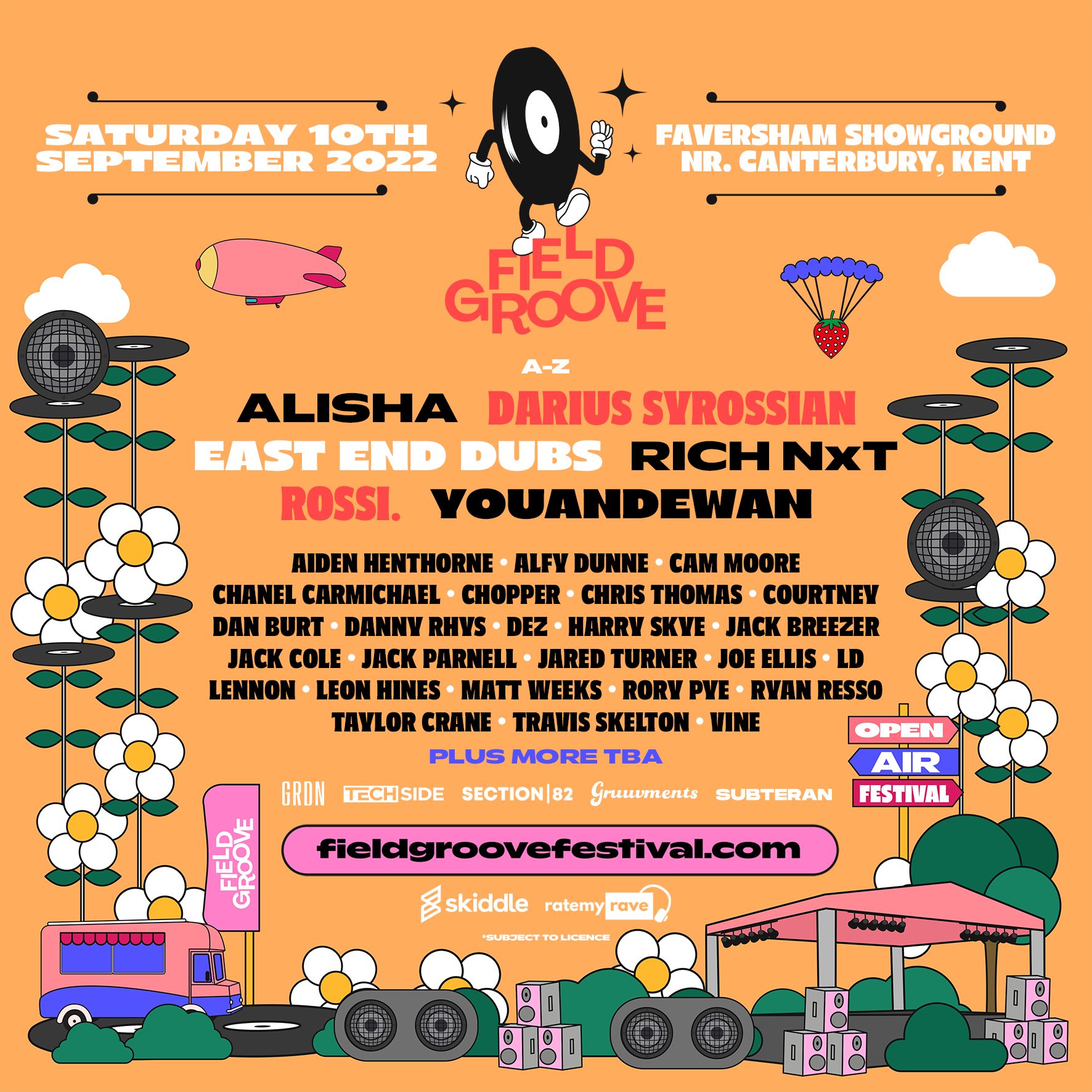 Where: Faversham Showground in Nr. Canterbury

Faversham Showground in the historic city of Canterbury, East Kent, will open its gates to those lucky enough to come by tickets to the first-ever edition of Field Groove Festival, on Saturday 10th September.

Allowing thousands of party-seeking revellers onto it's grounds, those present can expect to move to the sounds of the very best in house and techno over the ten-hour-long experience, with headliners East End Dubs, DO NOT SLEEP resident, Darius Syrossian, Rich NxT, ALISHA, Rossi and German dance-floor filler, Youandewan providing jams throughout the day.

Over thirty well-known local acts are also set to lend their support, tearing up the events numerous stages, fitted with state-of-the-art production and the best in live sound.

More artists and details have yet to be announced. Tickets go on sale this Tuesday (29th March) at 11am. Hit the link below to sign up to be notified when tickets are available. 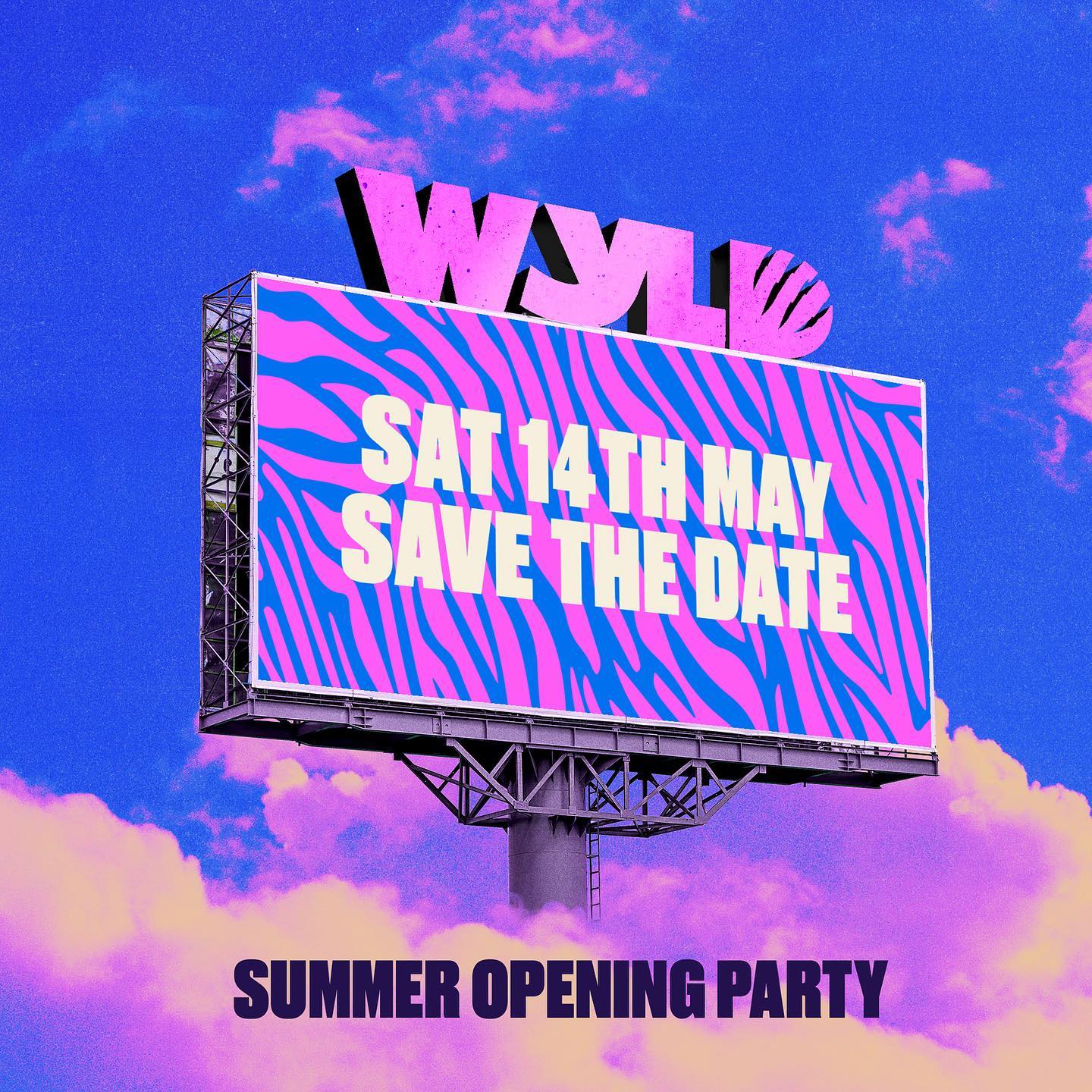 For those of you with a Birmingham zip code, who fancy themselves a bit of a fan of tech house, disco house or deep house - this should be right up your street!

Dance event organisers, WYLD have announced limited details regarding their first ever summer season at well frequented clubbing hotspot, LAB11 this year. Alongside a programme of regular resident names, the brand have promised a stellar lineup of quality headline names, as well as a thunderous sound system, mesmerising production and some of the best spots to dance in the sun in the centre of Birmingham.

Tickets and details concerning the line up for this year's parties are due to be announced this Thursday (31st March) at 6PM. Sign up, on the link below, to receive a notification letting you know when tickets are on sale, or risk bitter disappointment. Choose wisely.

On The Beach announces Fatboy Slim