Despacio In The Jungle Review

Despacio is happiness. The slogan has been attached to the 50,000-watt powered clubbing experience since its arrival to the dance music scene in 2013. It's appeared on posters and led the titles for videos, a bold and simple statement that would come to put other club nights to shame.

The towering Despacio bespoke speaker stacks were devised by LCD Soundsystem's James Murphy and the Dewaele brothers aka 2ManyDJs with the intention of creating an environment that they'd actually want to party in themselves, where lacklustre bass and superstar DJs are distant memory.

Walking into the main area of Roundhouse, we were offered ear plugs, something that by no means would have spoiled the audio experience. But it felt like the towering speaker system would have frowned in disapproval of the wedges in our ears at the prospect of blocking any frequencies they were yielding.

The circular shaped, high ceilinged main room boasted a mammoth disco ball as the focus. Whirling slowly, the dull glimmers and flickering reds lights enticed us further into the jungle themed abyss. Seven of the 11-foot tall stacks stood around the edges of the room and no matter where you settled, the sound was consistent. Eyes closed and head lost, the groove led the way. 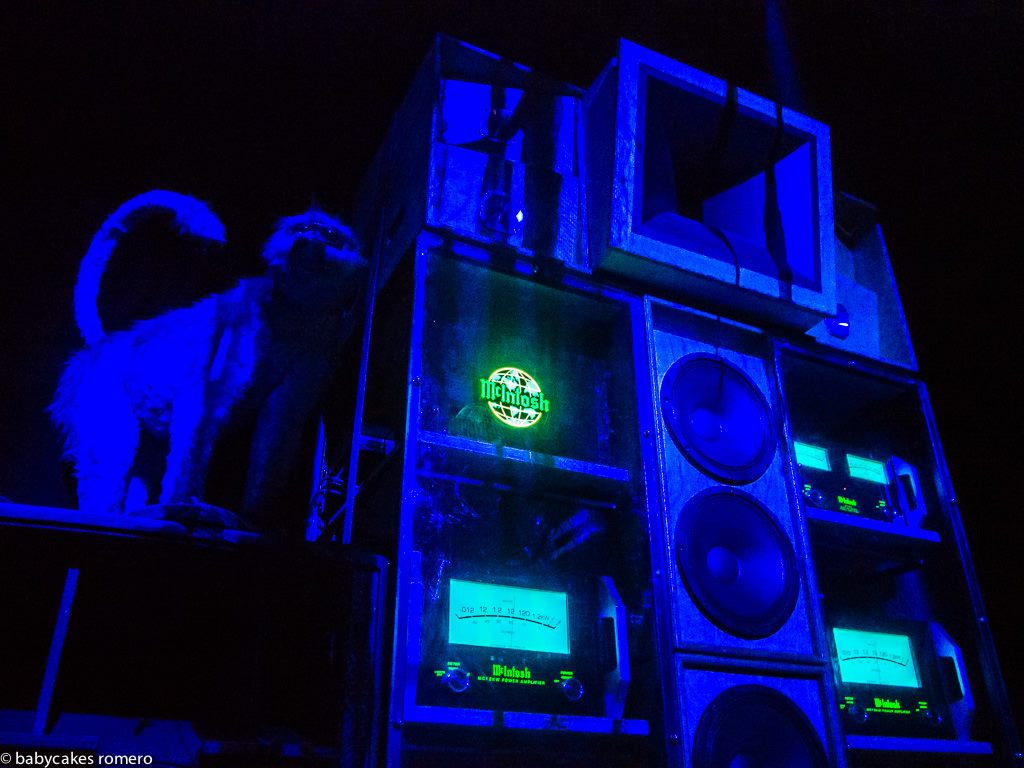 Toto's 'Africa' ruptured through the speakers, a fitting selection given the host of plastic wild animals inhabited in the room and the green rags of material draped across the ceiling. One thing was instantly apparent - there was no distortion when listening to that legendary synth line, even standing right next to the speaker it didn't make you flinch at the prospect of bursting an ear drum.

It was difficult not to gawp at the stacks themselves; they were a work of art. The dials on the McIntosh amps (above) cavorted from side to side with the music and the blue light emanated from the screen as a gentle reminder that these inanimate object weren't to be ignored, unlike Murphy and the Dewaele pair.

The artists behind the concept were nowhere to be seen, meaning there was no initial direction in which the crowd should look. Almost every club has the DJ on a pedestal whilst the crowd lock eyes on them - Despacio was the opposite. The crowd were dancing with each other, and more importantly with themselves, engrossed with the music and with the moment.

Light beamed off the tops of the speaker stacks, gravitating attention towards the colossal mirror ball. The beams danced across the room, illuminating smiling faces as an indulgent, slowed down version of Lil Louis 'French Kiss' filled the room, the moans of ecstasy (listen below to see what we mean) were clearer than ever, leaving members of the crowd blushing as every deep breath and gasp exited the speakers.

Despacio is Spanish for slow and gradual, and that's exactly what it was. Although you expected a giant climax, it never came, it built up and teased. It left you feeling betrayed by all the other sub-standard speakers that have abused your ears in the past. You heard tracks in a way you've never heard them before and appreciated them in a whole new way, and the vinyl only set made the sound even more authentically crisp.

Although the set was filled with sexy disco and house gems, a lot of it borderlined on cheese. 'Kiss You All Over' by Exile and 'Another One Bites The Dust' by Queen were undeniable crowd pleasers, but you get the feeling they were selected due to the exquisite sound and luxurious production that were hallmarks of this glorious period of pop music.

The ring structure of the Roundhouse naturally encouraged the audience to keep their positions around the disco ball, and classics like Daryl Hall and John Oates' 'I Can't Go For That' (below) brought the crowd together even further - every bit of percussion and every lyric was in crystal clarity. The lights above the stacks throbbed a warm white light, complimenting the melting vocals.

Despacio isn't just happiness, it's one of the most innovative yet simple clubbing experiences around supported by one the best speaker systems in the world. It's a reminder of how stale and repetitive clubland can be at times. Despacio is different, Despacio is rare and Despacio is one of a kind. Hearing is believing.

Like this? Try Glitterbox Ibiza with Basement Jaxx review