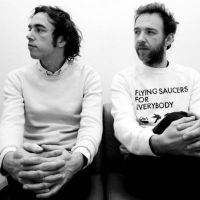 From politically incorrect prog-rock to funky r&b, from trendy hiptrop to banging German techno, ja: if it gets a booty going, the Dewaele brothers have it in their record collection.

In times where moms give their sons and daughters DJ-courses for their birthdays and bootlegging has become an Olympic sport, it is nice to see a record that sets a new standard in the genre of mix-albums: ‘2 Many DJ’s’ from Belgian groove-gurus Soulwax.

Fans of quality left-of-centre rock music will know Soulwax from their highly acclaimed album ‘Much Against Everyone’s Advice’, which made it into the British Top 40 and got rave responses in Japan and Australia. But there’s much more to the two brothers than meets the eye. Apart from being chairman of the Belgian Carpenters Association (Stephen) and having a black belt in tae kwon do (David), they are also masters in blending the finest products of music history together into a catchy, hilarious and -above all- intriguing groove exploration. From politically incorrect prog-rock to funky r&b, from trendy hiptrop to banging German techno, ja: if it gets a booty going, the Dewaele brothers have it in their record collection.

Blending beautiful tunes is far from new for the Soulwax brothers. Back in the dark days of 1999, David and Stephen started a DJ-show on Belgian national radio, called ‘Hang The DJ’, where they did exactly that. Years before bootlegging reached the trendy pages of The Face, they were already making their own mixes for inclusion on the show. Inspired by the philosophy of one Grandmaster Flash, they cut together the best bits of funky tracks into an even funkier mix. It was then that classic mixes of Blackstreet with Grandmaster Flash, Beck with Prodigy and Beastie Boys vs. Herbie Hancock with INXS vs. AC/DC saw the light of day. Praise the Lord.

After having wooed Belgian and Dutch crowds for a few years with these eclectic sets, they went on to impress the most cynical part of the world, the London scene, a loud yet harmless species. The British capital, where approximately 67% of the population (including 17% of women over 65) owns two decks and a mixer, is used to a thing or two, but Stephen and David immediately raised quite a few eyebrows with sparkling sets for London’s independent radio station Xfm, national institution BBC Radio 1 and appearances at the renowned Trash nights in London and Arthur Baker’s Sunday Sessions in The Elbow Room.

Impact on the trendometer: a fat 9.5. “When we played our first set for Xfm”, says David, “several club owners phoned up during the transmission to ask us to come and play their venues.” And when an (unnamed) DJ played Soulwax’s classic bootleg mix of Skee-Lo’s ‘I Wish’, Survivor’s ‘Eye Of The Tiger’ and The Breeders’ ‘Cannonball’ at a London club night and pretended he was mixing it himself, it became official: Soulwax was hot property. Even Jarvis Cocker showed his appreciation for their skills and none other than über-producer Felix Da Housecat invited the brothers to collaborate on his new project: a girlband called Glamarama. You gotta believe it…

2ManyDJs has been mentioned in our news coverage

Here are the latest 2ManyDJs mixes uploaded to Soundcloud.

Do you promote/manage 2ManyDJs? Login to our free Promotion Centre to update these details.