» News and Features » Trance Talent Rolls Into Manchester For Charity

What's better than a day rave ? Not much, we agree... but we've found something to better that, a day rave for charity!

All proceeds for the event will go directly to the mental health charity Wirral MIND with DJ's and their respective agencies waving their fee and cost's being met by the event promoter all for this fantastic cause.

The lineup is fantastic, featuring some popular and well know faces from the trance scene.

Headlining the event is Lange.

Lange is recognised as one of the most influential dance artists of the past decade; a DJ who has remained at the forefront of the scene throughout his career and a producer that continues to push all boundaries.

After an exhausting list of achievements, counting among them 20 UK top 40s, featuring on a film soundtrack, and remixing mainstream artists such as The Pet Shop Boys and Faithless, Lange remains one of the world's leading producers.

Alongside Lange's exceptional and successful studio work, he is a prolific international DJ, making appearances for some of the best club brands in the world including Insomniac, Cream, Godskitchen and Gatecrasher as well as performing for prestigious events such as such as Tomorrowland, EDC, Global Gathering, Sziget, Balaton, and ASOT and marked by his sustained appearance in the influential Top 100 DJ Poll for 8 years and rising to no. 6 in the well supported Tranceaddict Top 250 Poll.

With a thirst for innovation and a fearless streak, EverLight is not afraid to push the boundaries. Cultivating cutting edge sounds, creative concepts, and unique live performances with huge amounts of soul.

Signed to several well respected record labels including Future Sound Of Egypt?s Clandestine imprint, Outburst Records, Aria Digital, and Defcon Recordings, EverLight's productions have been featured on globally known compilations and radio shows including A State Of Trance, Grotesque, Outburst and more. Meanwhile strong and steady support from the best forward thinking DJ?s in the scene such as John Askew, Simon Patterson, Sean Tyas, Will Atkinson, Mark Sherry, Greg Downey, Giuseppe Ottaviani, and Armin Van Buuren ensure that his modern sound is constantly heard in clubs and festivals all over the world.

To siphon EverLight's music production passion onto the dance floor, EverLight performs with a custom built live performance system tailored exactly to his workflow.
This system allows him the freedom to chop, change, remix, and mash up his music library on stage across 8 virtual decks. The result is a DJ set with more flexibility and creativity than anything else, honing in on exactly what the crowd wants, when they want it.

Meanwhile, 253 full colour LEDs housed inside of an iconic custom built mask, flash, strobe, and pulse in time with the music, controlled by EverLight while he plays, adding an immense amount of character to his performances and leaving a lasting impression on the crowd.

EverLight is quickly rising up the ranks of the European trance circuit with passion fuelled performances at globally recognisable events, such as The Gallery @ The Ministry Of Sound (UK), Luminosity Beach Festival (NL), Horizons Festival (Ireland), Trancecoda and Trance Sanctuary (UK). A residency at Anomaly in his home city of Birmingham has gathered him a cult following and built a platform for EverLight to test his latest auditory experiments.

Also on the bill; The Stupid Experts.

A duo originating from the small town of Hawick in the Scottish Borders.

Ally Brown and Dave Walker were originally releasing music seperately under their own names and aliases, with tracks on the likes of Armada, Blackhole, Lost Language, Discover Dark and many more.

The pair moved away from the trance sound and began sharing their love for progressive. It was then they decided to collaborate, and The Stupid Experts was born.

The name was derived from the ridiculous phone calls they would have describing how a part of a track should be, and how stupid they sounded while talking on the phone, yet the music they started to make together was hailed as forward thinking and groundbreaking by the likes of John '00' Fleming.

Subsequent releases to follow on JOOF, Aura, FSOE Parallels, Colorize and many more. DJ support from the likes of John '00' Fleming, Solarstone, Gai Barone, Ruben De Ronde etc, these guys are certainly experts in their field!

Heading over from Norway are AstroFegs.

Formed in October 2016 originally with two members but since 2019 Niall Skjæveland Maloney is now a one man wrecking machine.

In July 2019 "Frameshift" was picked to feature on the Armada "Blastoyz & Allen Watts - Who's Afraid Of 138?! DJ Mix Vol. 3" compilation by Allen Watts and in September 2019 Trance Sanctuary named "Merekara" as their "Up and Coming Tune of the Month" for their September Podcast.

Going back to back with Astrofegs in a rare appearance up north is Sholan.

Sholan is not only the resident DJ for Ministry of Sound Club but he has tracks signed to Pure Trance , Extrema Global Music, Nocturnal Animals Music and MASS to name a few.

Famed for his high energy and uplifting style, Sholan is sure to bring the damage to Manchester with this one off b2b special exclusively for the brand.

Next up, flying in from Germany the Münster resident James Dust.

Starting his DJ career at the very young age of 15 years in youth clubs, but by the age of 18 he was already in the larger clubs throughout Germany.

Sherrie's passion for DJing started back in 2002, when she worked alongside DJ Lynda Phoenix on the Princes Trust DJ Course. Lynda was so impressed with her talents, that she advised her to seriously look at a professional career as a DJ! Sherrie then went on to study a National Diploma in Music Technology at college in Leeds, where she gained some experience in some high quality studios which enabled her to dip into the production side of things as well. Since first getting noticed working with The Princes Trust, she's been aiming to work her way up the ranks in the hard dance scene.

Her first club sets included Hangar 13 (Sunderland) and Random (Kettering), and it didn't took long for the industry to sit up and notice her talent. She got residencies at Digital Society in Leeds, playing underground electro, and also at Battle of the Sexes in Hull, as well as playing various guest sets in the UK, sharing the booth with some of the finest talents in her field

All for £7 + booking fee it's one not to miss and for a limited time, tickets are discounted for the Christmas period, so get on it !

Here are the next 2 upcoming events At The Zombie Shack, Manchester 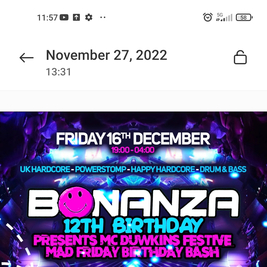 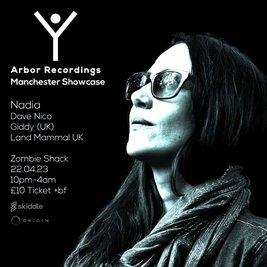