The Alternative Guide To... The Euros: England v Italy

Jonny brings us the final instalment of The Alternative Guide to the Euros as Italy faced an England side that captured the hearts of the nation.

And just like that, it all comes to a close. England's dreams have been shattered, once again. But at least this time, they came very close to victory. And not only that, they had me, a self-confessed soccer-illiterate, screaming and shouting to the point of hoarseness. This group of young players have really flown the flag for English sports this year, by doing what few other English football troupes have ever achieved.

I’d originally imagined that I’d make jokes about England's eviction from the competition, envisioning that it would have happened weeks ago and that we’d have all forgotten about it by now, but the fact they made it to the final, that they showed the ability to be the second-best team in a football-adoring continent is mighty impressive and worthy of admiration from even the most anti-football peoples of this country.

That doesn’t excuse the downright embarrassing behaviour of some of England’s “fans” as they shower our capital city in bottles utilised as projectiles and cover the streets in rubbish - that's England's “pride” for you - or the disgraceful display of abuse and racism plastered all over the Instagram accounts of 3 young men who missed penalty kicks whilst the majority of a nation watched with trepidation. Frankly, these “fans” are what give football a bad name in this country and really display the worst qualities of English people.

But let's not forget what the Alternative Guide to the Euros has been about: An incredibly in-depth, moment-to-moment analysis of all the action, and the final showdown between the English men of England and the Italian men of Italy delivered said action by the shovel full… Well, for some of the game anyway, I still yawned quite a lot…

My first observation was this rather interesting choice from the Italian squadron. They have a player who is “Immobile” right up at the front! Surely this serves as a great advantage for the English men, who, as far as I am aware, are all perfectly mobile, and should be able to run around the grass, no problem. Well, most of them can. Not sure about Kane.

A definite highlight of the game was that a little car brought the ball onto the pitch! Oliver, Charlotte's brother, tells me this has happened in every game, but it's certainly the first time I've noticed it. I think this is a great feature and that it should be utilised more often, perhaps as a sort of video game-esque bonus stage - maybe instead of penalties? 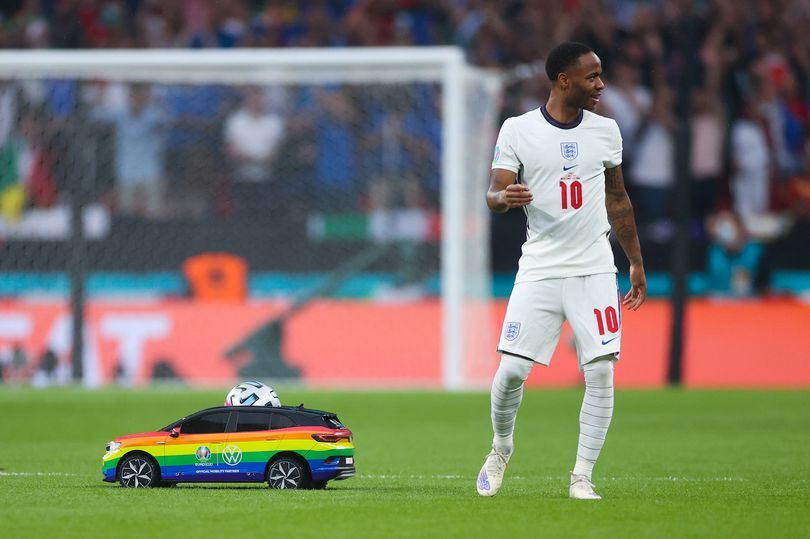 I’m not sure what Maguire was up to early on in the game, roughly one minute in. He just decided to belt the ball backwards, way off the pitch into the crowd, giving the Italians a corner kick. Perhaps he heard someone in the crowd shout “on me head, Harry” and just couldn’t resist? I don’t know.

GOAL! Just less than 2 minutes into the game, Shaw puts English men of England in the lead, which sends the room into a frenzy; Warren throws open the front door, once again, yelling “come on!” for all the neighbourhood, Charlotte and Oliver jump to their feet, Buster does a decent amount of barking and I have a go at the Katsu Curry crisps, once again provided by the wonderful Brian, fresh from the shelves of M&S. In my opinion, they’re even better than the chilli crisps of the semi-final. Things were looking good.

Things proceeded in typical football fashion for a good while from this point onwards - the usual makings of a match. There were some Italian free kicks that had Warren mighty concerned, there were more corners than Silverstone race track (which I think has a lot? I don’t know, I’m as knowledgeable on motorsports as I am on kickball), Pickford did a load of shouting, which prompted Grandad Brian to say “you can shout all you like Pickford, they aren’t paying any attention to you”, and an Italian player laid down on the grass and his legs rubbed for a bit, which looked quite relaxing.

Around thirty minutes, I was reminded of the big showdown between Portugal and Mexico that took place in Springfield in 1997…

Trippier tripped someone, and I said “Ey look, Trippier is living up to his name, eh?” but much like my Walker/Runner witticism from the previous game, this went largely unnoticed.

Oh, I almost forgot to mention, Liam paid me the tenner he owed me from the bet. The only problem was, he only had a £20 note, so I now owe him £10. He has made some vague threats about my knee caps and continuously tells me that he now “owns” me…

Let’s go over some second-half highlights before we get to the nub of the action:

- “Immobile has been taken off, probably because he wasn’t doing anything” - My friend, Zak, via messenger.

- Someone in the crowd was dressed as a pizza, but I couldn’t work out which country they were routing for…

- Yellow squares were being thrown left, right and centre.

- Italy basically swapped every player on the pitch

- An Italian player choked Saka, but that didn’t seem to matter, for some reason?

- Warren said “Did that touch the referee” to which Brian responded, “I thought he was German?” “What?” came the response. “I thought you said he was German, not Deutsch?”

- Jack Grealish came on the pitch, after some assistance from another player to get his top off.

- A woman in the crowd held up a shirt that read “Mrs Grealish 69”. I’m not sure if this was an official marriage proposal, or how Jack has responded to this, but I imagine it's a done deal. How could he resist?

And so, with the game equalised, we went, once again, to extra time. I can’t believe this now. Two bloody games in a row. And not only that, but at least in the semi-final when this happened, we got some action! But these extra 30+ minutes trickled by, with nothing much of note taking place. So let's move on, to where the evening drew to a close.

The finale, the encore, the curtain call: The penalties. I actually found myself excited and, dare I say it, even a little confident that the next few kicks will result in the young whippersnappers of England holding the trophy. So let's take a look at how this unfolded:

- England Penalty #4 (Sancho) - SAVED - It’s another miss for England, and now things are looking dire. Italy have to miss this for us to stand a chance.

- Italy penalty #5 - SAVED - The room erupts with delight at the possibility of turning this around.

I have now officially watched every England game of a major football tournament. I never thought that would happen, but here we are. And I have learnt a lot. There were moments I genuinely enjoyed the games, there were times I wanted to peel my eyes out with boredom, I have laughed, I have shouted, I’ve won money, I’ve lost money, I’ve loved the company of everyone I’ve watched a game with and I feel a certain amount of pride in the players for getting as far as they did, against all odds, despite the fact I couldn’t even name a single player before the start of the competition.

I hope you’ve enjoyed the Alternative Guide to the Euros, it's been a lot of fun (if also quite challenging) to write them! I’d just like to sign off by saying; please enjoy Football responsibility. It seems ridiculous that I even have to write that, but the fact that carnage takes over the country whether we win games or lose games is just absolutely ridiculous. And don’t even get me started on the racist comments towards these fine sportsmen. At the end of the day, Football is a game. It would have been amazing to see our boys lifting that trophy at the end, but they played an incredible series of games and managed to get themselves within reaching distance, but it just was not meant to be this time. But we shouldn’t be angry at them for that, we should be proud! If someone like me, who is STILL not 100% sure what offside means can feel pride for our team, why can’t the “fans” who have waited so long to see England get this far feel the same way?

Bravo, England. You did great.

Wanting to find something else to do this summer now that there's a football-shaped hole to be filled? Why don't you take a look at our Festival Finder Tool or head over to our Club's page for more great events.