Carnival the New Single from the Moods, coming to a city near you this summer. The party starts on 19th May on the BBC Introducing stage at Highest Point festival, Lancaster, recorded live and broadcast on BBC radio.

Carnival, the new single from the Northwest's premier urban & EDM collective, The Moods, will be mixed at the world-famous Metropolis Studios by Grammy award-winning producer Paul Norris. Paul has worked with major Top 10 artists including Alicia Keys, Gorillaz, Ed Sheeran and Kygo, and scooped a 2014 Grammy for his work with Rihanna on her album Unapologetic.

Featuring Jamaican-born artist Tixxy Bang and a vivid mix of brass, drum & bass and bold lyrics, Carnival is the ultimate summer 2018 anthem. It celebrates the freedom of finishing work for the weekend, of festival life, unforgettable times with good friends & brilliant music. Carnival was made to be played live and this summer, it certainly will be...

After a monumental 2017, The Moods are set for a massive festival season stretching from May right through to September. The party starts on 19th May on the BBC Introducing stage at Highest Point festival, Lancaster, which will be recorded live and broadcast on BBC radio.

The Carnival tour is the fourth major UK for the Moods in eight months: Since last June, 20,000 people in 16 different venues across 12 towns and cities have been blown away by their immense live show.

The Moods share the stage at Highest Point with an impressive roster of international acts including Hacienda Classical, Rae Morris and the Hospital Records DJs. Later in the summer, they open the main stage at Moovin Festival for legends De La Soul, Goldie and the Stereo MCs. The Moods also play the main stage at Audio Soup, and elsewhere headline two gigs: a slot at the huge Stramash venue for Edinburgh Fringe, as well as a London all-nighter at Nambucca for Camden Rocks. Add in performances at urban dance festivals Stampede and Sonderfest, supporting the likes of The Skints, Undercover Hippy and Jeramiah Ferrari, and it's easy to see why The Moods and their fans have plenty to look forward to this summer.

The Moods have been wisely described as "Rage Against the Machine, The Prodigy and The Happy Mondays mixed into a grime-soufflé". Formed in Manchester in 2014, this 10-strong band unifies rap, brass and strings, delivering a brilliant fusion of drum & bass, hip-hop, reggae and EDM. All ten Moods bringing their own unique style and energy to every single live set, meaning their mighty music always sparks off a contagious need to dance from the very first song on the set-list. What's more, their lyrics are relatable and real; this is music to make you think, as well as dance. With such a dizzying mix of instruments and passionate performers, their gigs are nothing short of spectacular. "It's all about the BPM" "says bassist Dave O'Rourke, "and the feel of playing it live".

The Moods' debut album Missing Peace was released in September 2017 and rapidly made a phenomenal impact, with physical and download sales in over 24 countries, hundreds of thousands of streams and stellar reviews. Two powerful singles: Joy and P.O.P (Profit over People) received multiple plays on BBC Radio Lancashire & Sheffield, along with 35 other UK, regional and student FM stations. Further afield, global internet radio stations broadcasted tracks from Missing Peace to over 100 countries, whilst videos racked up in excess of 40,000 views on YouTube, Facebook, & Vevo TV.

Here is the next upcoming event At Nambucca, London 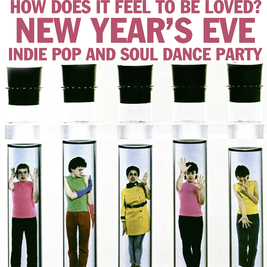 How Does It Feel To Be Loved? indie club New Year's Eve party

How Does It Feel To Be Loved? indie club New Year's Eve party

Indie pop and soul club How Does It Feel To Be Loved? throws its New Year's Eve party