Martha Reeves: ?The only thing that can change things is music?

The Motown legend recalls bringing segregated audiences together ? and dismisses much of today?s music as ?people talking to 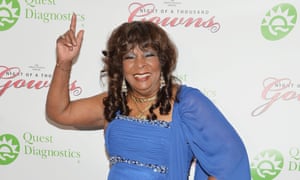 Hi Martha! How are you?

I?m happy. I got plenty time to speak to you.

You?re due to play Cheltenham jazz festival (1) ? are you planning a jazz-influenced set?

Well, every song Motown ever recorded me on was performed by jazz musicians. So every one of my songs can be considered jazz, because of the musicianship and the artistry of the players. It wasn?t made with noisy toys ? it was made by real live, professional jazz musicians. As for the show ? I haven?t the faintest idea of singing anything but my hits.

One of those hits was Nowhere to Run, which Lamont Dozier says was inspired by looking out of his window and seeing tanks rolling down the street ...

One of my desires is to sit with Holland, Dozier, Holland and ask them what the stories of songs like Come and Get These Memories, Heatwave, Jimmy Mack and Nowhere to Run were. I want to ask them what was in their mind. I know why I sang them, I have my own interpretation to feel those songs from my soul, but what inspired them? Did they remember why?

So you?d interview them?

It would be a dream come true to make a play, a musical out of Holland, Dozier, Holland music. That way I could apply their stories to the actual songs. They?re talented enough, and I have enough of their songs in my repertoire to make an actual musical.

Didn?t you speak to them about the meaning of the songs at the time?

You famously started off working as a secretary in Motown?s A&R department ...

I had been given a card by William Stevenson and told to come to the Hitsville USA building ? when I got there, there was no secretary! He told me to hold down the office until he was back ? he was gone three hours! (2) I started taking messages for the 17 staff at the time, assigning the piano to them all because they only had one at the time. When he came back I handed him a neatly stacked pile of messages ? there must have been 75 ? and that made me necessary and indispensable. I knew how to answer a phone because I?d taken a commercial course in high school, so I always encourage anyone who wants to be in a profession to learn everything they can about the line of work they want to do. Because I fit in very well, and became the first woman in that department.

How old were you?

I was all of 21, but I was still living at home, so I asked my dad if I could quit my job and go and audition and he showed me how to ride the coach from the eastside to the westside. At that time, if you crossed Woodward Avenue, which divided the east from the west, you could get into a fight, because there were gangs. As singers, we had competition, and we knew who lived on the eastside and who lived on the westside.

There were singing gangs?!

Singers, whether people admit it or not, have led every procession. Even in the Bible, singers and musicians are first in the parade. Whenever there was a gathering, the king would call for his entertainers ? the jesters and musicians. Even in a church service you have a hymn before a sermon. I try to keep people remembering that singers are very important ? when I got my assignment to be a singer, I went through the Bible and the dictionary to find out just why am I singing, because it?s not always welcome, and you don?t really get a lot of credit for having that ability. But everybody can?t sing ? I do know that! (Laughs).

Of course, you didn?t stay as a secretary at Motown for long ...

I did that for nine months, and when I left that department, it was to three girls from secretarial college. And I got on a bus with eight acts and a 12-piece band, and we toured 94 one-nighters. It was quite a strenuous tour.

It sounds it! On that tour you went back to Alabama (3) and must have witnessed segregation in practice.

Of course. At one show there was a barrier ? white on one side and black on the other ? and there were two guys with baseball bats and if anyone tried to dance or enjoy the music, they would hit them on the head. 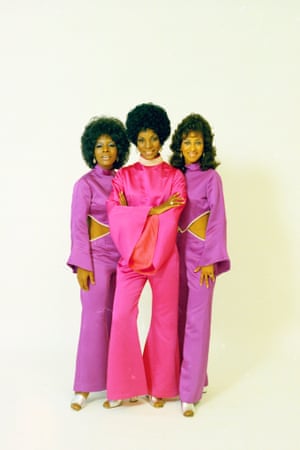 Who had the baseball bats? Security?

That?s what they said they were. But they were just two rough guys. So Smokey announced that those two guys could take a break and leave the side of the stage. Him being the star, he was able to make that sort of announcement. And we saw with our own eyes, on the finale of Mickey?s Monkey, which was his big hit at the time, people get up out of their seats, break the barrier down and become one audience. They started embracing each other, hitting each other?s hands, giving each other fives and getting up to dance together. These were people that wouldn?t speak to each other when they first walked in.

It proved that prejudice and racism is taught, and once people got up and broke those barriers down, we were one happy, lovable dancing family. And at the next gig we did, there was no barrier, no guards, and we went on peacefully after that.

Growing up in a house with 10 siblings, how did you ever get yourself heard?

At the age of three I sang in my grandfather?s church with my two older brothers and we won candy so I knew I was the singer from then, so I had no problem with being heard. My Mom would teach me songs while she was combing my hair. She would whisper in my ear lovely lyrics, I guess to keep me from screaming in pain or complaining how much it hurt. And I retained them.

I think she lived vicariously through me. She idolised Billie Holiday, and she would sing to us. Remember, I?m from the generation before television, so we entertained each other. Dad played blues guitar and Mom sang mostly Billie Holiday. I actually featured my Mom?s style of singing on my last recorded album, Home To You ? it was arranged for me by Dr Teddy Harris, one of Motown?s great arrangers, and on that I sounded like my mum.

Was that strange to hear?

It was a lovely feeling, because since mom passed away all I can remember is her voice. So, yes, it was a soulful, searching thing to do, and when it turned out to sound like her, I was very pleased that I remembered what her voice sounded like, and I can hold that in my heart for ever.

You went into politics for several years, serving on the Detroit city council. What made you want to do that?

As a performer I felt like I?d already been a politician. We had songs that marked history. Barrett Strong?s Money came out when everybody was trying to get a job. Songs like My Guy made people fall in love. So we?ve been involved, spirtually and intellectually, with our music, with every incident that?s happened in the past 55 years ...

What is the best force for change ? music or politics?

The only thing that can change things is music. You have to have people sing the Star Spangled Banner before you can have an assembly. Singing is always at the start. Anybody with any good sense would have music of some kind before an assembly.

What frustrated you most about politics?

I did quite a few things on the city council but there was never a time when people didn?t remind me that I was a performer and an entertainer. They thought I was playing an actor?s game. And it became personal in my life. I was followed around by an investigative reporter. They were very upset when the FBI couldn?t find me tied up with any of the people doing wrong at the time ? there were a lot of dishonest politicians during my tenure. So I felt I could do better just singing ? I don?t need to be an elected official to be a good citizen and a good example.

Were you upset when Detroit declared itself bankrupt?

I felt good about it because it was in debt and it needed some kind of clarification. A lot of people in business know there is a time to go bankrupt.

A lot of 60s music chimed with the civil rights movement. Do you see a parallel with what happened back then and the tensions on American streets at the moment?

I?m not going to say that a lot of stuff that is being played on the air these days is music. It?s a bunch of people doing a lot of talking, and they?re talking to toys ? Pro Tools. There?s not a pride for the musicianship, or learning to play things. A lot of the Motown songs are soothing, a lot of the songs I sang make my heart happy.

But there?s also a place for angry music?

You can blame some of the incidents now on some of the music. But it?s about their attitude. If you want to elevate your attitude, to reach a certain latitude, then you?ve got the right idea. I know a lot of things I?ve heard lately on the radio cause people to be angry, and it?s not their own anger, they were sharing somebody else?s anger. We all have an assignment, and my assignement is to make music to enlighten, to enrich, to inspire, to be liked. And that?s not the intention of a lot of music today ? I don?t think a lot of it is music.

In 2013 you wrote a moving obituary for the Observer about Motown?s head of artist development, Maxine Powell, who ?taught us how to dance with our feet ... today, a lot of women in this business dance with their bodies?.

I make a joke that they told me at Hitsville USA that if I kept my clothes on I could continue to perform! You don?t have to criticise as long as you?re in proper order. But I do think there are some nude performances of late that don?t have anything to do with enlightening or encouraging or giving anybody joy. (Laughs) It might be something else, but it might not be joy!

1) Cheltenham jazz festival runs from 29 April to 4 May

3) Martha was born in Eufaula, Alabama