ou appear to have the dream job, DJing at some of the most legendary clubs and festivals around the world. How did it all start?

In 1988 I went to my first club and discovered house music and, after saving up, managed to get a pair of decks in my bedroom at home in Cheshire. The Hacienda and then Quadrant Park were my favourite haunts and then in 1992 I moved to London and discovered Turnmills. I got my first residency there in ’95 but it was when I began producing and started the missdemeanours club nights with my friend Caroline [Prothero] that it all kicked off in ’97. I was then finally playing at all the places I’d dreamed off: Back to Basics in Leeds, Space and Pacha in Ibiza, Glastonbury… I’d actually been DJing for 8 years before I was able to make a living from it.

What’s your all time favourite club?

Space in Ibiza. I’ve just had so many wonderful times there. Behind the decks and on the dance floor. We Love on Sundays was tremendous fun, it was like a festival in a club every week. I remember the owner Fritz [Rosello] coming out and lifting my hand up and saying “The Queen of Space!” I must say Back to Basics is up there with Space as a close second. Every time I played up in Leeds you just felt everyone in the crowd was with you 100%. Proper vibes.

What’s been your most memorable career moment?

Oof. Hard to choose. Winning the Ericsson Musik Best New DJ award in 1999 and then the Dancestar Best Breakthrough DJ award in 2002. Sitting in for Pete Tong on the Essential Selection from 2001-2004, that was a real highlight. I loved doing those shows in the early noughties as well as the live essential mixes. A massive buzz. Also DJing to over 40,000 people at Exit festival in Serbia was immense. I played there a couple of times. I think that and the Balaton festival in Hungary plus Creamfields were my favourite festivals to play at.

Do you stick to a formula or is every set different?

Different tracks work in different environments and sound systems and I adapt my DJ set to what will work best wherever I’m playing. Saying that, I’ll always have a file of new tracks that I’m desperate to play out and I’ll probably play them whatever. If I’m playing to a massive crowd then I’ll play a lot tougher or play bigger tunes. If I’m in a smaller club I’ll play much deeper and slower and I’m probably at my happiest playing stripped down tracks in a small club.

What music are you enjoying listening to at home at the moment?

Clubs and music venues have taken a massive kick over the past two years. Has the club scene changed much in the wake of the pandemic?

Well, yes it’s taken a battering hasn’t it? The festivals I played at last year were superb and you get the feeling everyone is just so happy to be free and dancing again but club promoters artists, everyone with jobs in production have had a struggle so I hope things can get back to normal soon. I think we all probably still feel that bit safer dancing outside but it’s good to let your hair down in a sweaty basement again.

How do you like to relax when you’re not working?

Country walks. I have two Cavalier King Charles Spaniels and live in the countryside so I love walking as much as I can. It’s good for the soul. I love a good bit of telly though too. Succession is the best thing I’ve seen for ages. The Morning Show and The Great are must sees too. Also, I miss travelling so much. I used to be constantly on tour and can’t wait to see a bit more of the world again.

Where’s the coolest city to dj?

Florence. The most beautiful city. I used to play in a club called Tenax. It was the closest thing to a modern day Studio 54 you’ll get. They also had a wine bar on the balcony not far from the DJ booth so I could drink Tignanello while DJing and the dance floor was full of the most wonderful characters. Heaven.

Who will you be watching at The Music Barn festival?

How has becoming a parent had an impact on your music career? Can you still enjoy the hedonism of it all?

I stopped travelling when I had my son as I wanted to be with him all the time when he was really young, so family life did take over. Especially when my husband became ill [Lottie is married to Wall of Sound founder Mark Jones, who has been diagnosed with a rare type of dementia]. I certainly don’t party like I used to! It was a very unhealthy lifestyle staying up all night, getting two hours sleep and then dragging yourself to the airport. And I loved an afterparty! I think a lot of the DJ’s now are more mindful of their health and I often DJ without a drink now and it’s just as much fun.

Would you encourage your son if he wanted to follow you into the dance world?

He literally could not be less interested in DJing. He’s as obsessed with football as I am with music. That’s his thing and he’s very good at it. Of course if he has a change of heart I’ll be waiting, headphones in hand.

Here is the next upcoming event At The Music Barn, Kettering 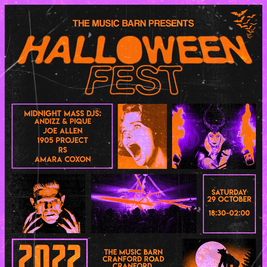