We chat to Danny Howard about his brand and record label Nothing Else Matters, the return of Blackpool Rocks, and not being too big to wrap your own Christmas presents.

It's been a meteoric rise for Danny Howard, who as the end of 2015 draws near enjoys one of the highest profiles of any selector in the UK.

Whilst studying for a university degree in sport and exercise science, he was simultaneously cutting his teeth in one of the UK's biggest nightclubs, Syndicate in his home town of Blackpool. He soon grew to widespread attention in 2011 after winning Radio 1's Superstar DJ award, which spawned the beginning of a long lasting partnership with the nation's biggest radio station.

Four years on and his weekly Dance Anthems show is one of the major platforms for championing new music in the country, and has earmarked Howard as an authority in the current and future sounds of club land, remaining completely in sync with his audience.

His clubbing brand Nothing Else Matters (listen to the latest radio show above) has generated sell out shows across the UK, prompting him to take the next step and join forces with Radio 1 affiliate Nigel Harding to launch the brand into record label territory, whilst each December Danny returns to his home town for Blackpool Rocks, joined by some of the leading lights in modern club sounds.

On the cusp of a busy winter season, we caught up with Radio 1's dance music specialist to talk Nothing Else Matters, Blackpool Rocks, and Indian flutes.

We’re nearing the end of 2015 now, and by all accounts you’ve had another blinder. What have been some of your standout moments?

2015 for me has been a year full of massive moments, one in particular was being a part of BBC Radio 1’s 20 year celebrations in Ibiza. I curated and hosted my own night as part of the event on the sunset strip outside Café Mambo and I was pinching myself the whole way through. I even had the honour of inviting my all time hero Erick Morillo onto the line-up and it was incredible.

One must have been the launch of Nothing Else Matters - the record label. Can you tell us a bit about how that came about?

100% this is something away from DJing that I’m incredibly excited about and proud of. I’ve joined forces with my former Radio 1 colleague Nigel Harding who is one of the most respected people in the UK music industry.

With him on board and with the support of RCA and Sony, everything is set up for us to really go out there and make an impact, representing the UK dance music scene worldwide.

The dream is to eventually have our own roster of artists that can cross-over into stadiums and festivals to really build the Nothing Else Matters family. The hard-work starts now.

Nigel’s been instrumental in giving exposure to some of the biggest success stories of recent years, Biffy Clyro and Florence + The Machine to name a couple, what will be your respective roles in running the label?

Exactly what you said... Nigel loves to develop acts and when he’s passionate about a project, he does everything in his power to make it a success.

His role will very much be on the creative side, he has great ideas and knows how to make something a hit. My role will be picking up tracks early, whether it’s for club or a potential crossover dance hit, I will be feeding the label with it’s sound.

Nigel and I will be working closely on every aspect within the label, we both offer something different to benefit the whole project and I wouldn’t have wanted to do it without him.

What’s been the reaction to the debut track from 99 Souls (above)?

Monumental! That track has been waiting to explode all year, I’m surprised we managed to keep it down for so long. It just ticks all the boxes and I can’t wait to see it fly.

Things are hotting up coming towards Christmas too, especially when Blackpool Rocks kicks off on the 19th in your home town. How proud are you being involved in the event? What has you most excited about this year’s edition?

Very proud. It’s our third year running now and to be able to curate massive line ups with names that would never normally visit Blackpool is an amazing feeling… a real treat just before Christmas for everyone to look forward to.

I’m excited to bring my Radio 1 colleague Annie Mac to the town, everyone asks for her all the time and they have for the last two years so I guess it’s third time lucky!

I also can’t wait for Craig David. He’s touring his new concept TS5 which is him DJing whilst singing and rapping over the tunes and performing his classics. It’s more than just him and a microphone on stage, we’re getting a show. It’s going to be epic (listen to Craig David's latest TS5 show below).

What has the response been like in the town?

Huge! Everyone always looks forward to this event, so much so, I get people asking me what the line up is from the start of the year. It’s the last real blow out before we settle down for Christmas so the hype is always on a level.

After then of course it’s Christmas, how does the Howard household traditionally celebrate?

Well ever since I was a kid, we always go to my grandparents because they have the biggest house that can fit the whole family in, sisters, mums, dads, cousins, aunties, uncles. Everyone comes together and it’s still the same.

It’s nice for me personally now living in London and travelling the whole year that I can see everyone, it’s more special now than it ever has been.

I actually pride myself on buying good, thoughtful presents. I also spend a long time wrapping them so they look amazing… to the point my family STILL don’t believe I do it myself. They’re convinced I pay someone to do it!

What’s the worst thing you’ve bought someone? And what’s the weirdest/worst thing you've had bought for you? To protect the anonymity of friends or family, you don’t have to name names.

The worst thing I’ve bought is probably a rug for my mum’s living room… She genuinely wanted one but the rest of the family thought I was taking the piss. Ah well, at least she was happy.

My uncle always buys the weirdest presents, once he went to India and brought back an Indian Flute as my Christmas present... Thanks Stephen.

Haha! Boxing Day sees you remain in the North West for Sanction with some of the real modern heroes of bass and house music at the moment at the glorious Albert Hall - that must be one of the best venues to play at in the North? From all your travels how does Manchester rank as a city to perform in?

Manchester is a bit of a home-coming for me as I lived there for two years and it’s my favourite city. It’s going to be nice to play Blackpool and Manchester in the space of a week around the Christmas period.

The Albert Hall is a massive venue where I’ve had the pleasure of playing once before so I can’t wait to get back. The line up is huge, the venue is monstrous and it’s on one of the biggest party nights of the year in my favourite. What’s not to look forward to?

How’s New Year’s Eve looking for you? How will you be celebrating?

This year I’m heading to Belfast to play at the legendary El Divino. The Irish are the amongst some of the best raving nations in the world and it’s always a bit of a wild one when you go there. It’s going to be amazing to end the year on a high!

I say it every year, but I’m going to try and stop being late for everything! I’m the worst timekeeper to the point that all my family and friends tell me to be somewhere half an hour before I’m actually meant to be. I soon caught on and now I account for them accounting for me being late so now I just end up being late again. It’s a vicious cycle.

And what does 2016 have in store for you? What can we look forward to from Nothing Else Matters, the brand and now the record label?

Head here for all Danny Howard tickets. Get your Blackpool Rocks tickets below.

The best Halloween events to attend in Liverpool

Here is the next upcoming event At Winter Gardens, Blackpool 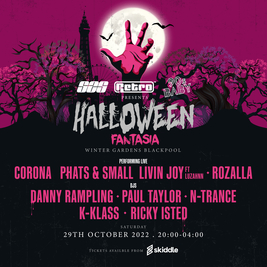