On the cusp of The Ordinary Boy's self-titled album launch and a 25 date tour, Daisy Bonham caught up with Preston to talk all things Ordinary Boys past and present.

Over what stands as a decade-long career, The Ordinary Boys have delivered an amalgamation of sounds from indie-rock tracks to albums laden with pop-punk and ska connotations.

You might not be acquainted with The Ordinary Boys chronology, but you're bound to be adjusted to their earlier top ten hits 'Boys Will Be Boys', 'Nine2Five' featuring Lady Sovereign and 'I Luv U', with each of their previous three records more than holding their own in the UK charts.

On Friday (2nd October), The Ordinary Boys are set to release their new self titled album via their own label Treat Yourself after a lengthy hiatus.

While pursuing individual avenues during this time, front man Preston has been songwriting for the likes of Olly Murs and The Vamps; new guitarist Louis has been playing with his previous band Spectrals; James has been producing sound for movies and Charlie runs a music venue.

Now they are back together however, not only are they releasing a new album, but they have also released over twenty tour dates around the UK. In swivel-eyed anticipation of what's to come, Daisy Bonham caught up with Preston ahead of the album launch to talk music, tour dates and all things Ordinary Boys past and present.

After your popularity in the 2000’s and being on hiatus for ten years, how do you feel about the album?

It’s easy to invest so much attention in real life and careers and sensible, boring things that you neglect the fun stuff. I got to a time in my life where it was starting to look like I would never tour with my band again but my daily twitter mentions are still pretty much exclusively from people wondering if the Ordinary Boys would ever release any new music.

So we've just fully swerved real life for a little while and it feels fantastic. It’s all been a bit of a self-indulgent quarter-life-crisis for us and we are very happy for people to come and get involved.

Preston, you refer to being proud of your first album, mentioned ‘some great moments’ within the second and outlined that the third was a challenge and not a sound you necessarily enjoy. As a group of musicians and songwriters what have you learnt from your first three albums and how has this shaped the fourth?

Every Ordinary Boys album is different. I mean fully different. And I like the first because of the energy and swagger that it had. That was because when we made it we were unaccountable to anyone and had no one to impress other than ourselves.

10 years later and we are in much the same position. Once you take away outside influences and expectations it is much easier to make something that you can be really proud of.

You've undertaken quite a journey for a band barely into/near to their thirties. Reverting back to the start, was it a conscious decision to alter your sound or a matter of evolution for The Ordinary Boys?

I’m actually the only one who has even broken 30 so we are a really young band. The last time we did this we were all teenagers. And once you near 30 I think you start to revert back to the music you liked when you were a teenager.

Even if just for nostalgia. So after 10 years of trying to progress and mature our tastes we are back listening to the same punk records that we grew up on. It’s more a matter of devolution, but with the help of 10 years of experience I suppose.

The new album itself is very self-actualised and polished. Has that come with age and experience?

I’ve been working as a writer and producer for pop acts like Olly Murs and John Newman for the last 5 years or so, so my brackets of what seems polished have moved a lot since 2004. But we had a great team of mates around us.

The album was produced by Rory Atwell who was in Test Icicles and produced the Vaccines and Veronica Falls and MJ from Hookworms and mixed by Dan Lancaster who mixed the new Bring Me The Horizon record. For what was very much a DIY record we managed to recruit some ace people.

You’ve described the new album as ‘fuelled by reunited childhood friendships, new friendships’ and ‘rediscovery of the records that shaped us’. Listening to the album it’s very clear that the chemistry and dynamic between you all works well.

Has this album been smooth sailing for you as a group after dabbling in different genres and exploring other musical avenues?

Genuinely we would start practice with nothing and finish with a song. It was a natural and easy process and we are the best and pretty much the only friends we have. It’s such a treat to hang out together that no one really worries too much about musical differences, of which there aren’t really any anyway. We are a very good team.

Announcing tour dates must be such a mix of excitement and nerves. Are you happy about the venue choices?

We insisted on a few of them. Hull Adelphi was always a favourite. We tried to play places that we remember enjoying the first time around and heading back to reclaim them.

It is nerve racking worrying about whether the venue choices are more based on our own nostalgia than actual likelihood of filling up the venues but from the response so far I’m pretty confident that this is going to be a very special tour.

Are there any personal favourites in there or any venues you’re really looking forward to playing (and why)?

Glasgow King Tuts is always a great time. And the Cavern in Exeter is really special and the staff are so nice there. We haven’t played our home town of Brighton for years and I am really looking forward to that one.

Truth time. Being that little bit more mature on this tour are there any random items or home comforts on your tour riders ? Blue M&Ms or batman duvet covers?

Other than the M&Ms and batman duvet which all bands insist on or the show can’t go ahead, we try not to ask for anything. The venue provides a meal and we don’t eat for a few hours before the show and we aren’t drinking on this tour because it has so many dates that we wouldn’t survive. The only significant thing about our rider is that we haven’t got one.

Here are the next 4 upcoming events At Night And Day Cafe, Manchester 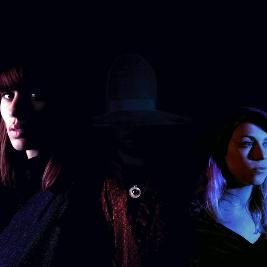 This event has been Postponed until 3rd Mar 2022 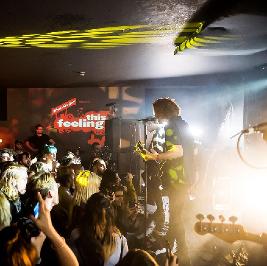 This event has been Postponed until 11th Nov 2021 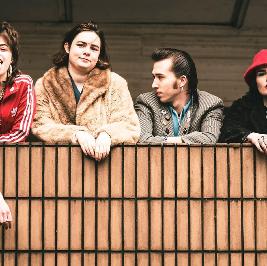 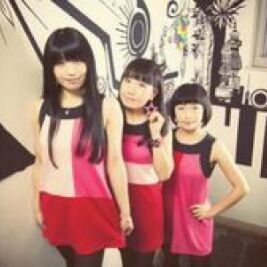 “When I finally got to see them live, I was transformed into a hysterical nine-year-old girl a...