» News and Features » Whamageddon: The legend of Last Christmas

Whamageddon: The legend of Last Christmas

Christmas, for the most part, is an enjoyable time of year. There's not much to dislike about it. Gifts, usually a restock of much-needed underwear depending on your age, a tonne of teeth-eroding treats, multiple servings of turkey or tofurkey, for the veggies, and downtime from work spent with friends and loved ones. It's great, two thumbs up! But it's not all festive fun and frolicking...

There are some aspects of this most joyful time that can induce a sort of festive fear. A fear so vivid, it'll make the hairs on the back of your neck stand up as if realising it's Christmas Eve and you've yet to do any of your Christmas shopping. Just the mere mention of one single word, especially in the early days of the month of December, can trigger yuletide anxiety. That word is 'Whamageddon'.

For those unaware of Whamageddon, let us tell you a little more about its origin and the rules behind the game. Spawned on a forum of an online gaming platform back in 2010, under its first iteration, 'GTPlanet vs Wham! – Last Christmas', Whameggedon became a UK-wide phenomenon some years later in 2016 when a Facebook page appeared detailing the rules behind the dreaded game many of us loathe today.

(Tweet posted by comedian Romesh Ranganathan @RomeshRanga back in 2018) 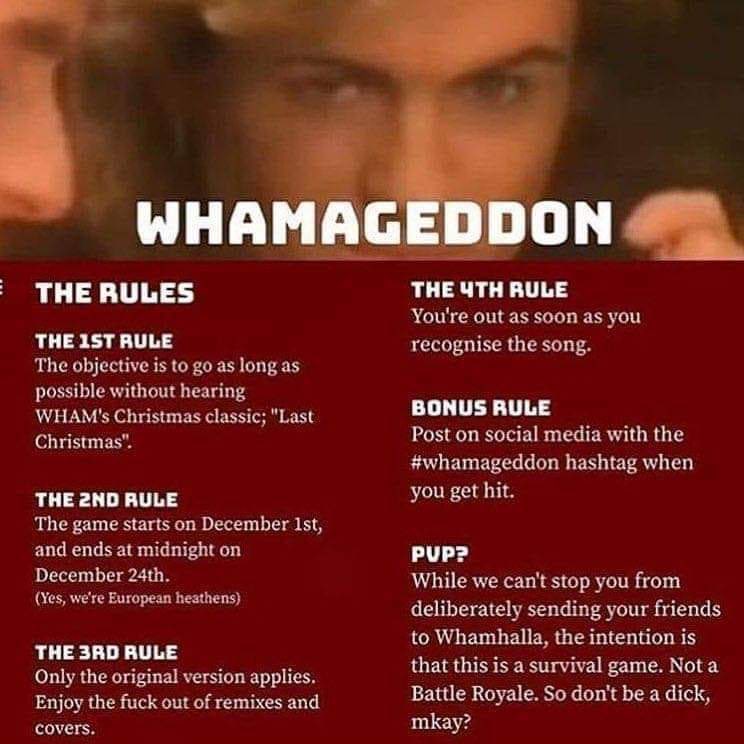 The objective of the game is simple. Go as long as you can through December without hearing Wham!'s corny Christmas classic, 'Last Christmas'. Upon hearing the record, you're out of the game.

It's more of a 'when' and not an 'if' you'll hear it. A looming audible disaster that's just waiting to happen. Tales have been foretold of the few who've made it through the festive season with ears still unspoilt, but we've yet to meet anyone to live up to this claim. And with the shocking amount of airtime it gets each year, it's inevitable that you will at some point be caught out. It's as if those alarmingly upbeat, highly-caffeinated radio hosts and DJs want us to fail, and to prove just how overplayed it actually is, here's a little statistic for you...

'Last Christmas' was recorded and released back in 1984 by the dewy-eyed, big-haired pop duo, Wham!, AKA George Michael (RIP) and Andrew Ridgeley. Thirty-six years later, it went to number one on the UK charts for the very first time. In one week alone, it was streamed over nine million times. Now, try and tell us this has nothing to do with this wretched game.

(WARNING - Do yourself a favour. Don't press play on the video below if you haven't yet heard the song)

Thankfully, whilst conducting our in-depth research for this piece, we did come across a few mainly unsung heroes who've taken action against Whamageddon. One of those was a UK-based pub chain, Fuller's Pubs, which, back in 2018, banned the record from being played in all of its two-hundred pubs. Hopefully more of the same this year, Fuller's Pubs.

All hatred for the game and record aside, we understand that it's played in the name of light-hearted Christmas fun, and to that end, we've taken to the idea of making it a sort of 'Battle Royale' as comedian Romesh Ranganathan puts it (See image above). The thought of ruining a close friend's day, week or even month, in true Grinch style, by sending them to what is commonly referred to as 'Whamhalla' makes us feel all warm and fuzzy inside. That's the Christmas spirit, right there.

Whichever way you choose to embrace the legend that is Whamageddon this year (we hope it's Battle Royale) remember, only twenty-eight days of suffering its generic sleigh bell-laden sound remain before it disappears into the post-Christmas void once again, for eleven long months. Back into the freezer it goes, along with every Bublé, Mariah Carey and Band-Aid record out there. Sayonara.

Check out our What's On Guide to discover rowdy raves and sweaty gigs happening throughout the festive period. For festivals, lifestyle events and more, head on over to our Things To Do page or be inspired by the event selections on our Inspire Me page.