The junior skateboarding sensation recently took the time to answer a few of our questions, shedding light on his introduction to the sport and explaining why competitions are of vital importance to its growth

Already a much-accomplished rider, sponsored by huge brands of the skateboarding world, Independent Trucks, Bones Wheels and 187, he's as much at home on the streets as he is on the bowls and verts. Originally born in Liverpool, he now resides with his family over in California, where you can usually find him blasting mega ramps, grinding pool coping or tearing up sidewalks and stair sets.

Talking with the gifted multi-disciplinary rider, it's also clear that he's just as confident a public speaker as he is a skater (is there anything he can't do?). Explaining everything from how he first became involved with the sport to why competitions are vitally important to the continuation of its growth worldwide - hear what this youthful ambassador of Skateboarding had to say in his full interview, below...

Tell us about how your journey in skateboarding began; when did you get your first skateboard, what was the first trick you ever landed and who influenced you to take up the sport?

"I started skateboarding when I was 7. I went snowboarding for a day and loved it. After that we went to a local snowboard/skate shop in Venice, I picked up a skateboard and started skating around the shop. It felt like snowboarding. My dad was surprised I could do it, so he bought me the board and I skated all the way home on it. Then I would skate to school every day. After that, I started going to Venice skatepark with my mum after school and loved the vibe."

"I started skating with all the older guys, and the first 'proper' trick I learned was a backside invert. I didn't really know anything about skating so I just started by myself and then was really encouraged by the local skaters at the park who made me feel part of something."

There are now reported to be more than 85 million skateboarders worldwide. What is it about this subculture that speaks to so many people? What makes it so different from other extreme sports?

"Skateboarding can be done pretty much anywhere. You don't need to live near a mountain, forest, beach or where some of the other extreme sports happen. Skateboards are quite cheap compared to other sports gear and you can literally be in the same park or spot as a pro and be using the same equipment as them. You don't go down to the local field and play football with Ronaldo, but in skateboarding it's different. Everyone is together. Not many other sports can say this. You can be a complete beginner or a pro and still find something fun. It's also really cool and flying around fast and high is always going to get people interested and hyped up!" 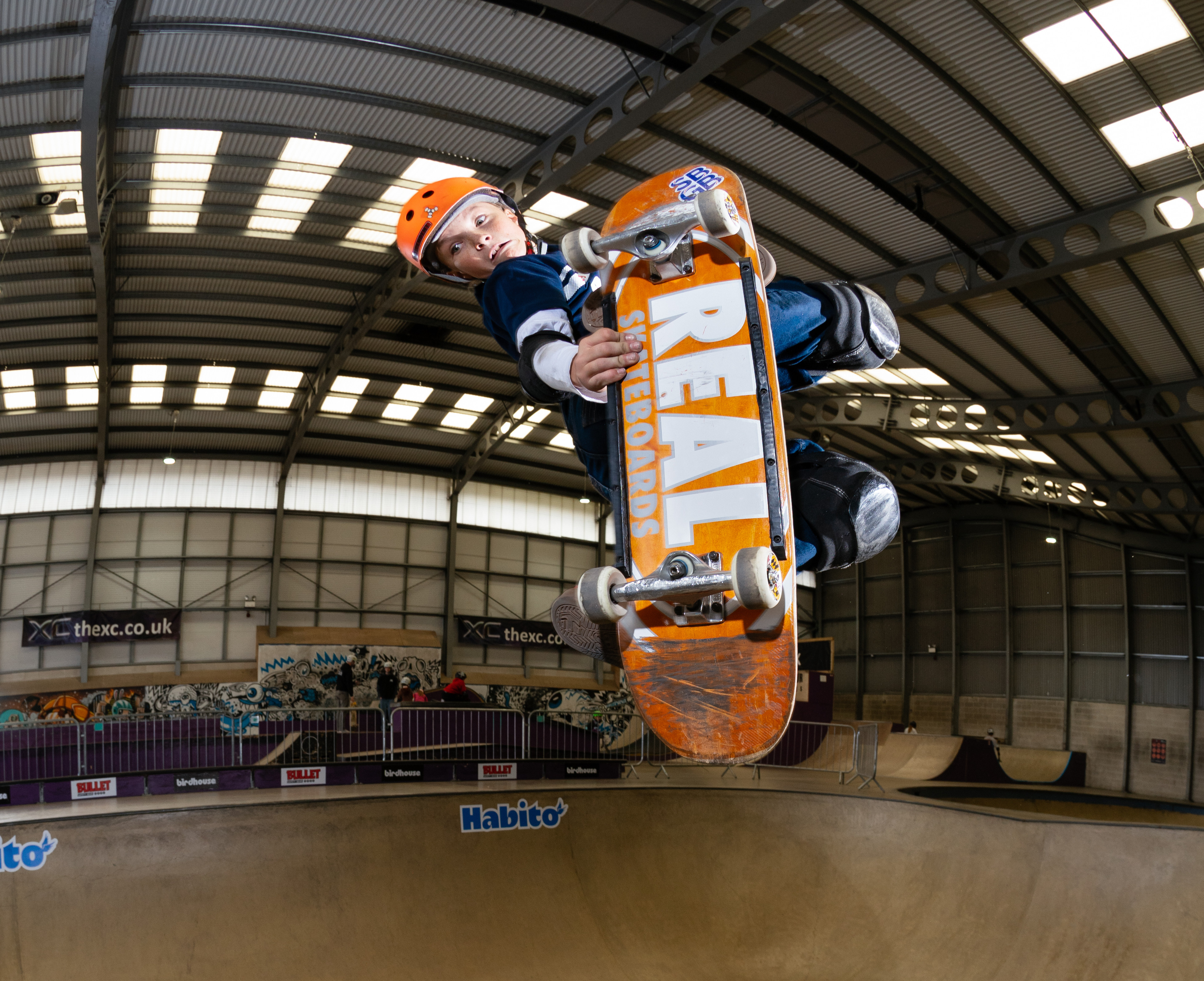 A tough question - who do you personally consider to be the GOAT of the skateboarding world and why? You can only choose one.

"Keegan Palmer is the GOAT. He has the style, speed and technicality, and he's also a really cool and funny guy. The most important thing is that he makes skateboarding fun when you skate with him."

With reference to the second-ever Skateboard GB Virtual championships, taking place this month, how important are competitions like these to grassroots skating?

"Virtual competitions are fun and low pressure. It is good to encourage younger and all skaters to take part and get used to putting lines together and thinking about it. There are no limits to how many runs you can take, but you should give yourself a set number of tries so that you can get used to it when you do it for real."

Skateboarding is now also an Olympic discipline, having been introduced back in 2020. How do you think this will affect future generations of skaters? And who should we be looking out for the British team at the 2024 games?

"You should be looking out for the whole team! We are all pushing really hard and going to show everyone British skateboarding! Skateboarding in the Olympics is a good thing for all, it will advance the sport, take the progression of tricks to a really high level and constantly advance. It will also bring skateboarding to a new audience. Even my nan knows the names of tricks now haha!" 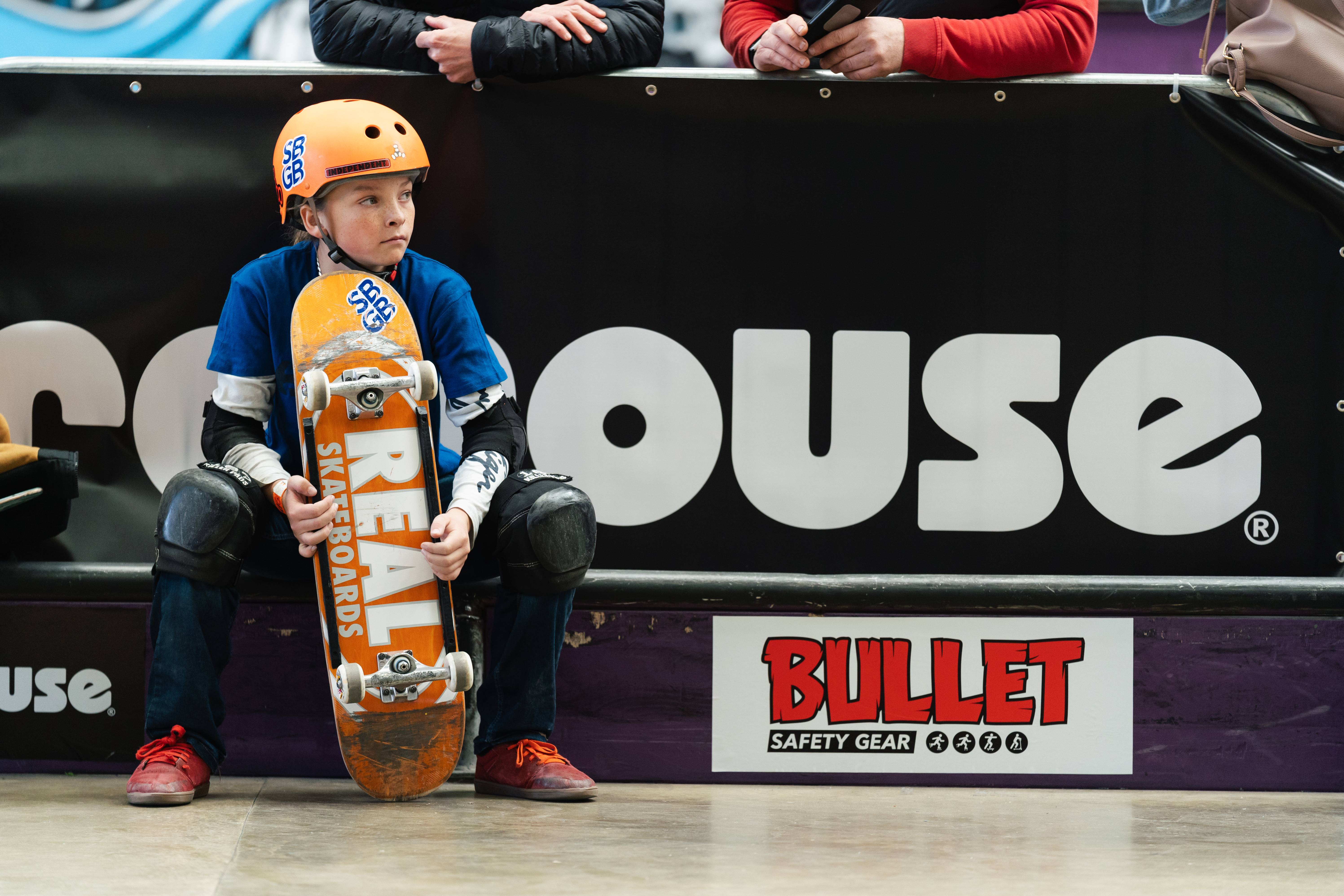 Skating transition or heading out into the streets - Which do you prefer and why?

"I love both, I couldn't really pick. I skate transition because going high and fast is a real rush for me but skating out on the streets and finding spots is so much fun."

Looking ahead, where do you see yourself competing in the years to come? What are your ambitions? And what aspirations do you have for the sport going forward?

"Obviously, I am really focused on Paris and really stoked to have been picked to be on the skateboard GB team. I'm excited to skate in the Olympic qualifiers."

"I just really want to push and promote skateboarding to the younger generation as I felt like the older skaters being cool to me really helped me when I was starting out and they still hype me up and inspire me now. I also want to do as many big competitions as possible."

"Personally, I want to learn as many new interesting tricks and show creativity in lines and flow speed and power. All the up-and-coming new skaters are really pushing each other right now, taking the level of skating to new heights."

We know that watching skate videos is a popular pastime for skateboarders so, to that end, what is your favourite skate video soundtrack?

"The music on Nyjah’s video part with the Meek Mill Dreams and Nightmares soundtrack was super hype!"

Last question - You’re about to head out on a skate trip and you need a sweet playlist to accompany you on your travels. Which five tracks always make the cut?

To learn more about the championships and our sponsorship of this year's virtual event, click or tap - here.