From epic clubbing events, featuring some of the biggest names in dance music, to A-Level results parties, festivals and much more - Check out our pick of some of the best new events on Skiddle, with tickets now on sale

The weekend is finally upon us, we're almost there people! Just a few more hours to go before we can log off, clock out and leave the stresses of work behind for two long days packed full of good times and excitement.

Oh yes, it is indeed Friyay once again which can mean only one thing - It's time for our weekly rundown of the sickest, most outrageous and highly sought-after new events, with tickets now on sale!

So if you're struggling for plans this weekend or looking to book up your next few weekends, or maybe you're looking to plan a big night out ahead of receiving your A-Level results next week - college students, we see you - you need not look any further. Below, you'll find everything that your heart, soul and ears desire.

Don't hang about, snag yourself a ticket or two before it's too late...

(Click or tap on the event, venue or artist names below for tickets and more...)

Where: Galvanizers SWG3 in Glasgow

Carl Cox, the DJs DJ of choice, has been recruited by the Colours House Party team for a special live performance at Glasgow's SWG3 this autumn.

The internationally renowned mixmaster and Ibiza legend, a mainstay of the scene since the early '80s, will bring his usual bag of techno treats to the people of Glasgow on Sunday 26th September. Making his debut at one of the city's most popular clubbing destinations, SWG3 Galvanizers, the event will also mark Carl's first live show in Glasgow in over six years.

Don't miss out - Get your tickets and witness one of the greatest to ever grace the one's and two's making his grand return to Scotland.

The informed outfit behind one of Scotlands most recognised dance event brands, Nightvision have recently announced their autumn programme of events. Delivering a string of specially curated house and techno shows, Re:Set will host some of the biggest and most respected names from both the respective scenes, at The Liquid Room live music in the Scottish capital.

Kicking off the 2021 season properly, Nightvision plans to throw one of the biggest parties Edinburgh has seen since the pandemic took hold back in March 2020. The lineup, which is said to be packed full of HUGE names, has yet to be announced. Watch this space for more details as they come...

Frequently supplying the dance-loving contingent of Northern England with some of the best live electronic music experiences out there, ENRG and its passionate operators are a leading force within the British dance music landscape.

Focused on promoting the finest DJ talents across a series of venues, featuring only the very best in stage, sound and light show production, ENRG has garnered quite a reputation over the past several years, and all for good reason.

Recently revealing the anticipated schedule for its autumn/winter runs of events, the dance brand is poised and ready to welcome names such as HAAI, DJ Seinfeld, The Blessed Madonna, Mella Dee, Floating Points, Avalon Emerson, Disclosure and Denis Sulta, who is set to open ENRG proceedings with a live set at the Invisible Wind Factory, on Friday 17th September.

Where: Digital in Newcastle Upon Tyne

Newcastle-based events collective, Shindig Events will present a colossal night of electronic music, starring a host of gifted DJ/producers, at the city's most expansive and technologically equipped nightclub, Digital on Friday 20th August.

Confirmed to take over the turntables throughout the course of the evening, those lucky enough to gain entry can expect an assortment of earth-shattering sets from skilled selectors the likes of Irish whiz kid, Rebuke, rising house music producer, Alisha, globe-touring techno champion, Joseph Capriati and more.

Rave to the best in house and techno from 10 pm until 4 am at what is set to be one of the wildest parties in the North East this year.

Where: Y Plas in Cardiff

Yes, it's true. Shangri-La: Open Air at Cardiff Castle has now completely sold out. However, (those who didn't get manage to get a ticket, we're looking at you) there's a still chance to join in the party and sample the atmosphere at the follow-up after's event, taking place at Cardiff University's Student Union and music venue, Y Plas.

Running from 10:30 pm until 4 am, Shangri-La: The Afters will maintain the antics witnessed on the grounds of the city's historic fortress, with a list of yet to be announced DJs taking over the airwaves all-night long. Eager to find out which names will be performing at the event? Well, you'll just have to wait. Headline acts will be announced on the night! Patience is a virtue...

Expect mind-altering Alice in Wonderland themed visuals and decor created by the legendary Visual Architects, trippy light and laser shows, a chest-rattling bespoke sound system and much, much more.

A nostalgic evening, taking you back to the old school days of raving. One not to be missed!

Where: The Emporium in Coalville

Experts in the field of clubbing, knowledgeable promoters and trusted custodians of rave, Worried About Henry are busy preparing a for BIG one in the East Midlands this autumn...

Partnering up with Loughborough party starters, DBE, AKA DubBoroEvents, both sets of seasoned event pro's have worked their magic, bringing together a night of pure and unadulterated bass music.

For the sound system connoisseurs who roam amongst us, the junglists, the drum n bass heads and the trigger finger happy - this one's right up your street.

Where: CHALK in Brighton

Relative newcomers and yet famed veterans of the UK's grime and hip hop scene, at a collective age of over 140 years old, London rap duo Pete & Bas are heading out to Brighton this August for one of their first live performances, post-social distancing.

For those of you who've been living under a rock, Pete & Bas are the pair of fire pensioners who've recently taken the music industry by storm. Breaking the mould and every single stereotype concerning the relationship between the older generations and hip hop culture, the two elderly rap dons are proving that age is nothing but a number.

Spitting inimitable, guttural lyrics over some of the fiercest beats around, the likes of which can only be attributed to the twosome, Pete & Bas have rightfully caught the attention of some of the scenes biggest platforms, including GRM Daily, and worked with high profile producers such as FUMEZ The Producer, on their monster track - 'Plugged In'.

Fast becoming one of the UK's best-loved rap outfits and so more much than a gimmick. Don't miss your chance to see one of the most unique groups in British hip hop in Brighton. 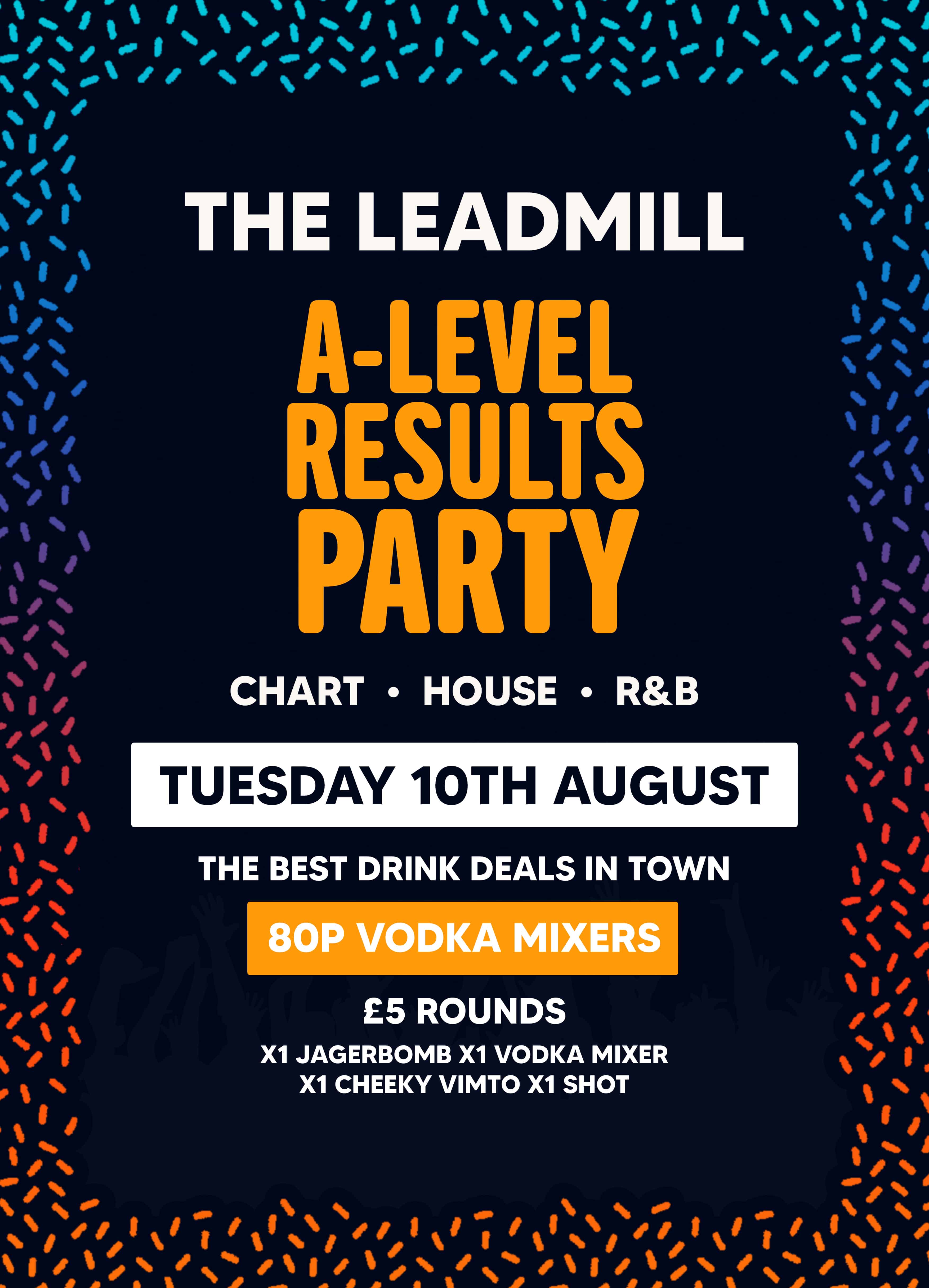 It's that nerve-wracking time of year again for college students across the country, as many are due to learn the fate of their future in education and discover if they've achieved the A-Level results required to study at their university of choice. Breathe people, breathe.

Whether you're celebrating or drowning your sorrows this time next week, there's plenty of A-Level result parties happening in cities and towns across England and the devolved nations. One, in particular, set to offer the best entertainment and value for your money will take place on Tuesday 10th August - Results Day - at The Leadmill, Sheffield's longest-running student nightclub.

Recognising things haven't been easy for students as of late and eager to throw the biggest and best party in the city, organisers have slashed drinks prices to help ease the pain or add to the revelry. In terms of music, expect live performances from some of Sheffield’s most admired DJs providing a nonstop mix of chart-topping hits, house bangers, R'n'B jams and much more.

A-Level Results Party at The Kasbah 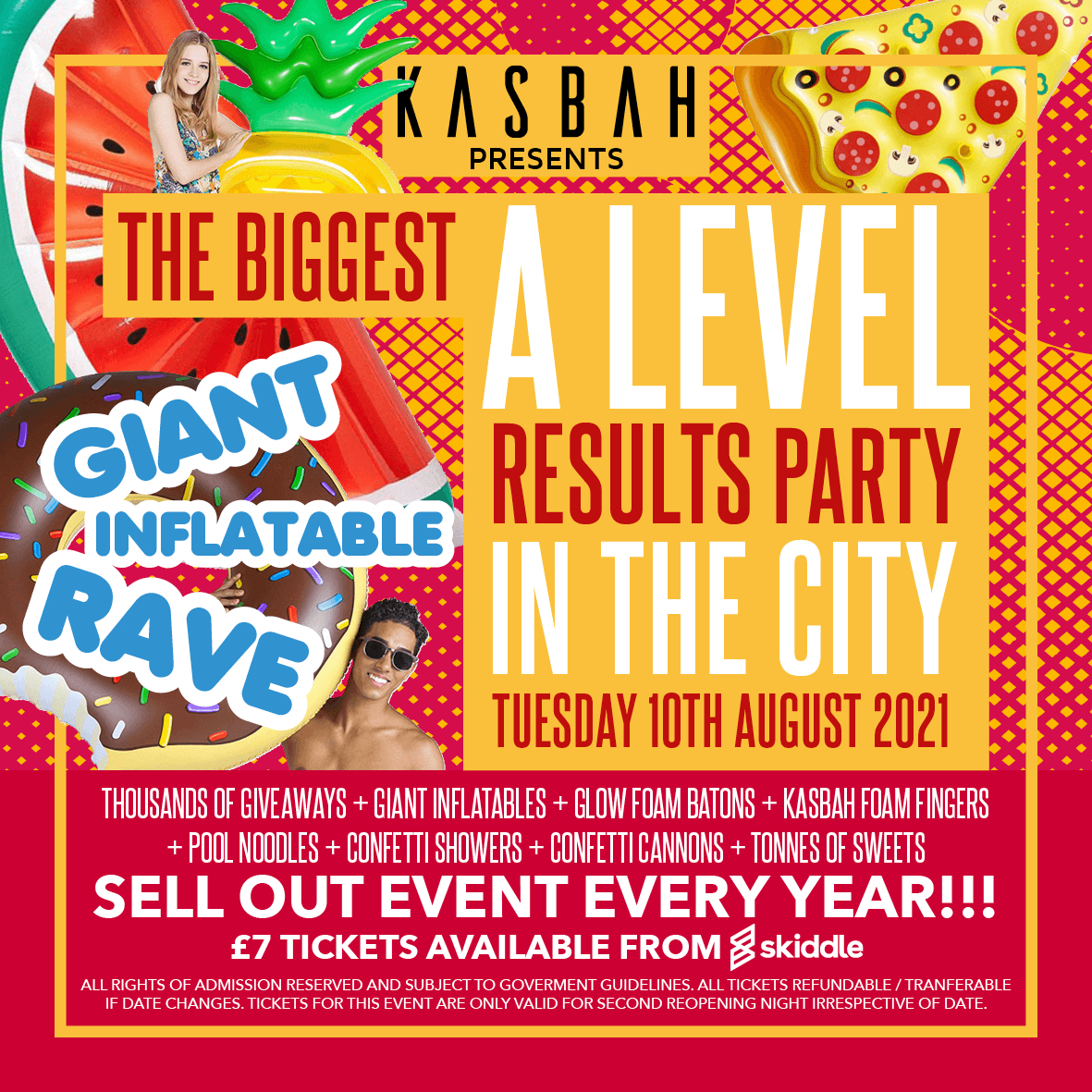 Another huge A-Level results party, this time going off in the Midlands, The Biggest A-Level Results Party In The City at The Kasbah returns for what looks to be yet another sell-out event.

Join the Kasbah team at the popular Coventry-based venue, for one of the whackiest graduation celebrations of the year. Rave on top giant inflatables to the best club classics and pop hits. Don giant foam fingers, wave around glowing foam batons and munch your way through tonnes of sweets whilst being showered with confetti from the massive confetti canons.

Fancy leaving with some goodies? Play along with games and enter contests throughout the night for your chance to win prizes, with thousands of giveaways expected.

Whether celebrating or feeling sorry for yourself, this is the place to be on results day - Tuesday 10th August.

For more clubbing events, music festivals and A-Level results parties happening where you are, head to our What's On and Things To Do pages or try out our Festival Finder Tool.