A selection of some of the best raves, gigs and more, added to Skiddle this week

This week on Skiddle, we've noticed a handful of last years sadly postponed and cancelled events popping back up on the site. Huzzah! Amongst the new and rescheduled dates, set to happen throughout 2021, are stand-out shows from London soul singer-songwriter Greentea Peng, and Chicago-native rap superstar, Lupe Fiasco.

We've also witnessed new Hac51 Classical dates, added due to the enormous demand for tickets, with a new show set to take place at one of Manchester's biggest warehouse venues, as well as brand new gigs from the likes of Everything Everything, Foals, Goat Girl and more...

Oh, and something for the football fanatics - check out the Fanpark Euro 2020/21 events, screening this years rescheduled UEFA Euro 2020 games live across the UK. Guaranteed to be the best places to watch the boys finally bring football home #threelionsonashirt

Click or tap on the event titles below for tickets and more...

Bringing back the sounds that once filled the world famous Manchester nightclub, The Hacienda, legendary DJ great Graeme Park alongside the impressive Manchester Camerata Orchestra present - The Hacienda Classical.

One of the UK's most evocative series of dance music events, taking audiences on a journey back in time to relive that golden era of the former rave space, the Hacienda Classical parties are renowned for providing the very best cuts from a variety of genres - from acid house and disco, to techno and more - performed live by some of the most respected selectors of the time. Full lineup yet to be announced.

Recently announcing more live dates later this year, the passionate team behind the event brand have including a date at Manchester's huge, 10,000 capacity Depot (Mayfield) venue.

Tickets are on sale now and selling fast. Get yours below...

Popping up in cities across the country this summer, football fans will be able to gather in their hundreds once more to witness the Lions finally bring football home, at dedicated fan zones in Hastings, London and Manchester. This year is the year - c'mon you know.

Follow the England team in their quest for glory throughout June and July with 4thefans. Watch last years rescheduled games on a colossal, anti-glare screen. Soak in that incomparable atmosphere, enjoy refreshments including premium beer, live DJ sets and much more, throughout each jam-packed 4-hour experience.

Also boasting special guest appearances from a handful of England Legends, including Paul Merson and David May, these events are dedicated to the football-mad fans amongst us.

Tickets for a number of these upcoming events have already sold out. Don't miss your chance to watch the boys lift the trophy this year.

Manchester-based electronic art-rock collective, Everything Everything have announced a special one-off show this August, at one of Coventry's oldest and most popular independent music venues - the Kasbah.

Comprised of members, singer Jonathan Higgs, bassist Jeremy Pritchard, drummer Michael Spearman and guitarist Alex Niven, the band have been performing since 2007 and have released a string of critically acclaimed singles and full-length records, such as debut album Man Alive and last years RE-ANIMATOR.

The group have recently released a brand new single, 'SUPERNORMAL', written during recording of 2020's RE-ANIMATOR record. You can watch the video for the catchy new track above.

Where: Singleton Park in Swansea

Easily one of the biggest alternative rock bands the UK has produced in recent times, Oxford native's Foals will perform in Swansea's largest urban park, Singleton Park the night before their sold out show in Cardiff on Friday 13th August.

Taking influence from various genres and styles, the quintet have been noted for fusing elements of indie, rock, punk and math rock, producing their own, inimitable signature sound.

Renowned for their raucous live performances - a particular Skiddle highlight being the bands secret set at Glastonbury back in 2019 - the group have picked up a bunch of awards throughout their career so far, including the NME Award for Best Live Act in 2020.

Catch one of the best live bands in the business, doing what they do best live in Wales this Summer. Get your tickets now below...

Norwich-born afro-soul musician, Oscar Jerome will embark on his 'Breathe Deep Tour' of the UK and Europe throughout October and November this year, stopping off in Birmingham for a performance at iconic music venue - the Hare and Hounds.

Touring his latest record, named after the upcoming tour, 2020's Breathe Deep, the respected jazz guitarist, who's also a member of London-based afrobeat outfit Kokoroko, has gained quite the name for himself for his solo output, getting regular airtime on the likes of Giles Peterson's BBC 6 Music radio show.

Best described as laid back, soulful, and sun soaked, his music contains a score of different influences, from latin inspired soul to modern jazz, reggae dub and more, each assisting in building a sound which is recognisable as Jerome's.

His accomplished sound has led to a number of support slots with some of the biggest artists in the jazz genre, such as jazz saxophonist Kamasi Washington, and collaborations with the likes of London jazz pioneers, Ezra Collective, Sons of Kemet and award-winning soul singer-songwriter, Lianne La Havas.

Where: The Crossing in Birmingham

As part of their forthcoming tour of UK and Ireland this year, Brighton band Squid are set to perform live at The Crossing live music venue in Birmingham this September.

Formed back in 2017, the south-coast-based five piece have quickly risen out of the underground scene, becoming one of the UK's most celebrated post-punk collectives. Initially snapped up by cult label Speedy Wunderground, owned by acclaimed record producer Dan Carey, the experimental group are now on the roster at Warp Records.

Releasing four noteworthy singles since signing to the experimental label, including 'Sludge', 'Broadcaster', 'Narrator' and their most recent track, 'Paddling', the punk act look poised and ready to hit the ground running in 2021, with brand new album Bright Green Field set for release this May.

Where: Gorilla in Manchester

Following the release of recent single 'Badibaba', South London's Goat Girl have set forth plans for a headline tour of the UK and Ireland in 2021, stopping at Manchester's Gorilla for what is set to be one of the loudest live shows in the city this year.

Known widely amongst fans of the post-punk scene, Goat Girl have become recognised for their acute awareness of social and political injustices, utilising their platform to vent frustrations on topics ranging from sexual harassment and relationships, to Brexit and more.

Combined with an eclectic sonic mixture of sounds, inclusive of everything from country to electronic, the groups creative output has gained the attention of several music bodies, including non other than popular London imprint, Rough Trade, who the band signed with in 2016.

The band will also be performing tracks from their most recent album release, On All Fours, issued at the beginning of the year, whilst out on tour this September.

Where: O2 Ritz in Manchester

The international man of funk, Cory Wong plans to head on a musical journey through Europe and the UK this Autumn, wowing audiences with his mind altering talent, on his upcoming 'Fall Tour'.

Regular collaborator and touring partner of American funk outfit Vulfpeck, Wong has been involved with numerous successful projects over the years, including his own prosperous solo career. In addition to touring and releasing records with one of the worlds finest funk acts, he's also found the time to launch his own label, Secret Stash Records, and frequently directs and arranges music for TV shows such as NBC’s The Voice and The Winner Is...

Taking in 16 dates throughout October, the tour will see the Grammy nominated songwriter, guitarist, producer and bass playing virtuoso heading to venues in Spain, Italy, Switzerland, France, Germany, Belgium and the Netherlands, before arriving here in the UK.

Supporting the release of his new album Cory and the Wongnotes, fans can expect to hear tracks such as 'Tiki Hut Strut', 'Starfire' and the 'Stevie Wonder Medley'.

The bohemian Londoner, real name Aria Wells, whose stage name is based on her favourite herbal beverage, has been making waves on the UK soul scene since 2018. She's since released a flurry of celebrated lo-fi tracks, the likes of 'Mr.Sun (miss da sun)', 'Downers', 'Hu Man' and latest single 'Kali V2', also performing at the BBC 6 Music Festival in 2020 and on wide reaching YouTube music discovery channel - Colours, back in 2019.

Can we expect an album from this impressive soul songstress in 2021? Yes we can! Due for release on Friday 4th June 2021, her debut full-length 'Man Made' will be issued via London label TENNNN. Citing influences the likes of Ms Lauryn Hill, Erykah Badu, Fugees, Finley Quaye and Ms. Dynamite, you can be sure it's going to be worth a listen.

Catch her live in Liverpool this year and see for yourself what all the fuss is about. Act fast and secure your tickets now.

The legendary 'kick-push' American rap star has confirmed plans which will see him making the trip across the pond to the UK this summer, announcing a new date to replace last years cancelled show at London's O2 Forum in Kentish Town.

For those of you unaware of Lupe Fiasco - shame on you - he's the super talented, multi-disciplinary, Grammy award-winning, Chicago-based rapper and record producer, who took the world by storm with his 2006 debut album release - 'Lupe Fiasco's Food & Liquor'.

A steady flow of masterful records ensued, such as 'Lupe Fiasco's The Cool' in 2007 and 'Lasers' in 2011, featuring some of the rappers biggest tracks to date, including 'Superstar' featuring singer Mathew Santos, 'Battle Scars' and 'The Show Goes on'.

Come Together '21 in Birmingham 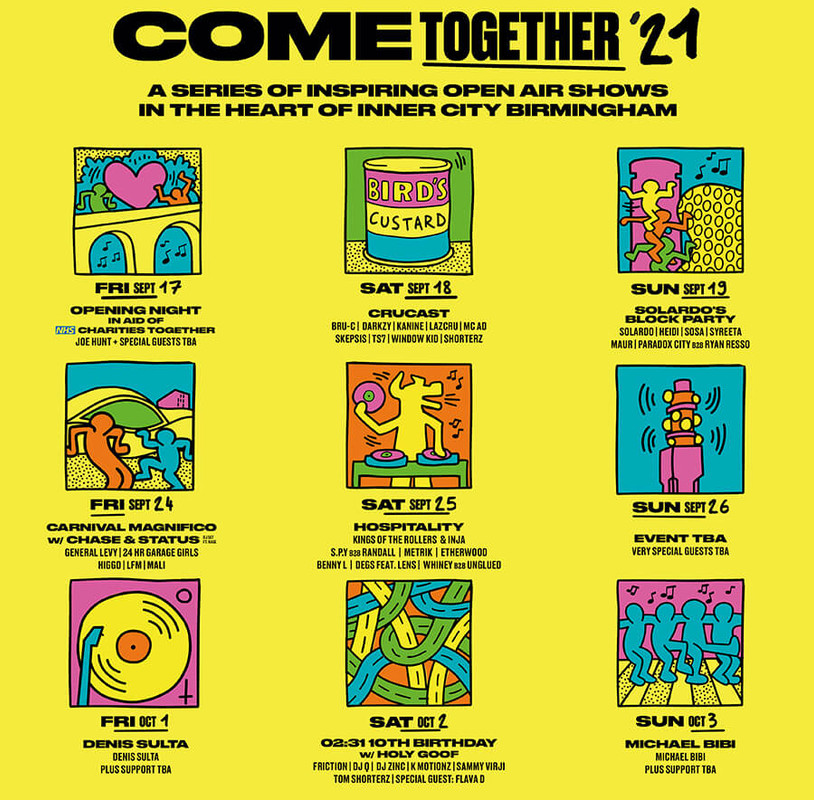 Seasoned party pro's Weird Science, in collaboration with brand-new open-air events space, bar and street food venue - Luna Springs, will host a series of spectacular dance music events in the heart of Birmingham, throughout September and October this year.

Featuring appearances from a plethora of world beating dance names - from flamboyant mixmaster Denis Sulta to SolidGrooves owner Michael Bibi, and renowned Manchester dance duo Solardo - as well as a selection of parties organised by some of the countries finest dance labels and party collectives, the series events looks set to have the city's creative quarter rocking for three solid weeks.

The opening night of the upcoming run of shows will see passionate DJ and NHS fundraiser, Joe Hunt take to the helm alongside some yet-to-be-announced, special guests. In aid of the NHS, Weird Science have announced that 500 free tickets will be given away to NHS staff members looking to attend the launch event.

Tickets for Come Together '21 will be available from Monday 19th April at 10am. Find them here

Looking for a Socially Distanced event to attend in the upcoming weeks and months? Check out our long list of COVID safe parties happening near you throughout the spring and summer here