Here we are in August already, almost two-thirds of the way through the year can you believe, and we're still being overwhelmed with an enormous volume of live music spectacles and more.

With the focus now beginning to shift from the festival fields back into our beloved venues and nightclubs, as the Autumn draws ever closer, we're closely watching as a host of well-known event brands begin to show their hands. Detailing just some of the jaw-dropping lineups and various entertainment offerings they have in store for the remainder of 2022, it would be something of an understatement to say we're a little bit excited for the seasons ahead.

So, why not see for yourself what's getting us all giddy here at Skiddle? Scroll further down the page to find a handful of the very latest events - with tickets now on sale - taking place over the coming weeks and months. 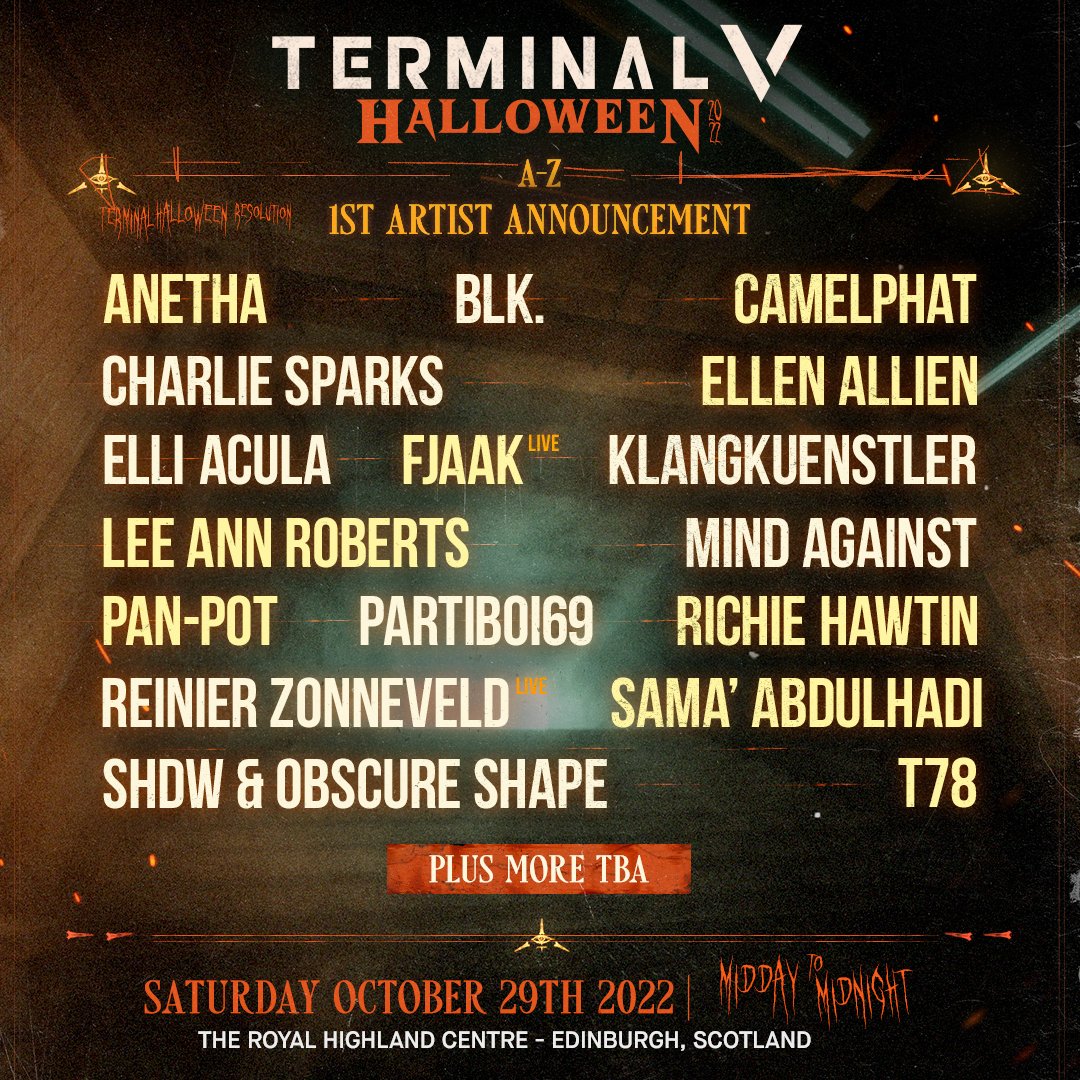 The Halloween edition of the UK's biggest techno event, Terminal V, has recently been announced, along with the first phase of artists set to appear over the course of the day-long event this October.

For those who've never before experienced Terminal V in all its glory, visualise a series of inter-connecting halls and warehouse spaces, each boasting monstrous stages armed to the teeth with lasers, LED screens and chest trembling sound systems, commanded by some of the scenes' most reputed DJ/producer talents and you'll get just a small taste of what to expect.

Add in some bone-chilling decor and a couple thousand, fancy dress-donning ravers, and you've got a seriously supernatural party on your hands. 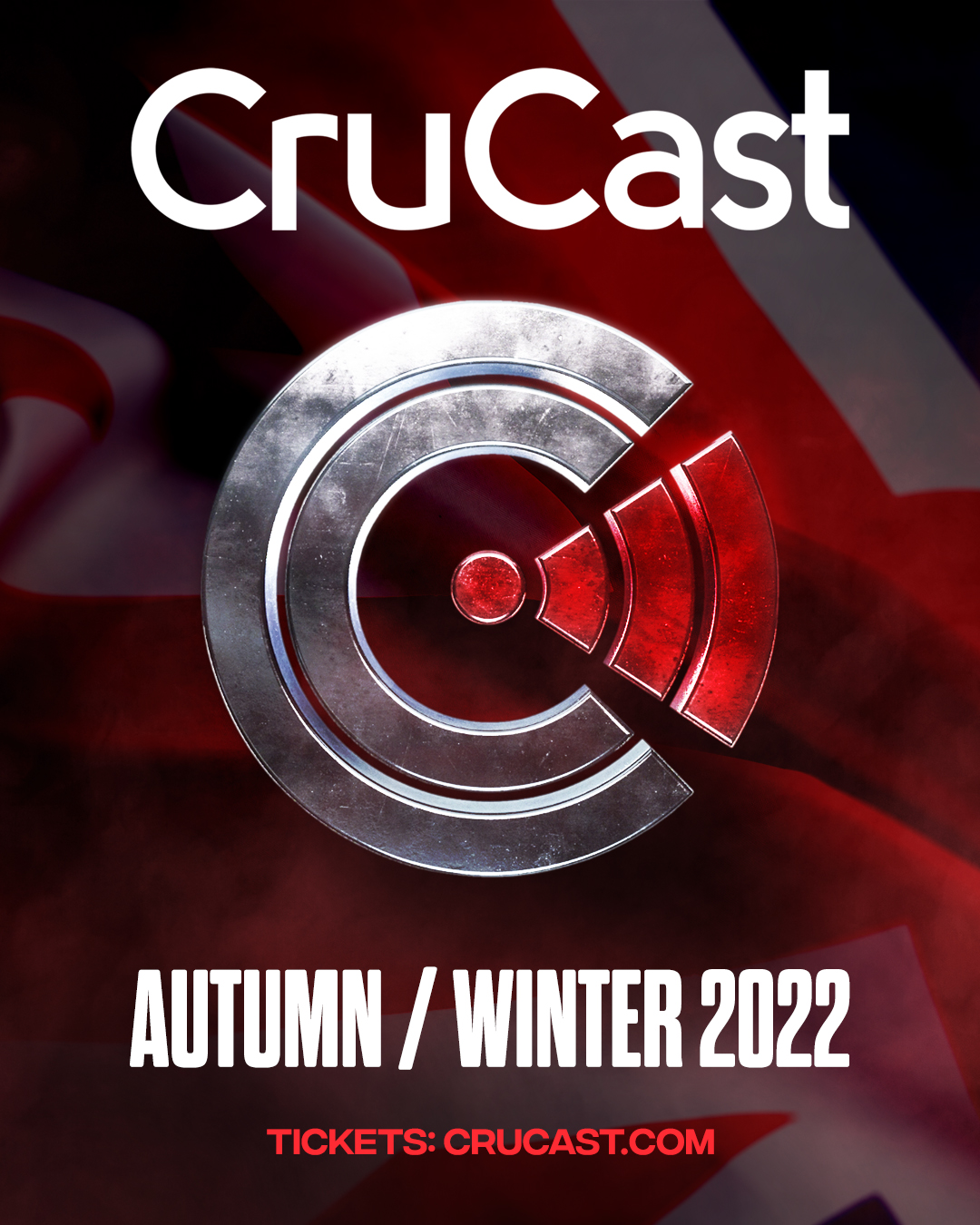 British bass music collective, CRUCAST have revealed their autumn/winter series of events with a number of massive shows set to happen in major cities across the UK in the coming months.

A leading name in the genre, the CRUCAST label has become a respected source for new music, promoting the best upcoming talents as well as the established pioneers of the sound. Known for pushing the boundaries of what can be expected from a record label or a clubbing event brand, the collective has grown from strength to strength over the years, building upon its gold reputation with takeovers at festivals the likes of Pierjam and Hide Out Festival.

Announcing dates in Liverpool, Newcastle-Upon-Tyne and Oxford so far, with sets from sought-after selectors representing everything from bassline and electro house to D'n'B and garage, yet to be announced, you can be guaranteed a first-class party whichever event you choose to attend.

Where: Various venues across the UK and Europe

Drum n bass powerhouse, Hedex embarks on his first ever UK and European tour through the autumn of 2022, bringing an epic new live show and some very special guests along for the ride.

The Cambridgeshire-born DJ/producer, formally known as Jack Hedges, has soared to the top of the underground in recent years. Signed to Dubz Audio, founded by jump-up legend, DJ Guv, he's been touted widely as a figurehead of the new generation, breathing new life into the subgenre's sound.

Having already been seen commanding massive audiences at events around the globe with his repertoire of club weapons, including 'On My Mind' and 'Sunset' from his debut album, From The Rave, the 23-year-old now finds himself making preparations for the commencement of his forthcoming tour. One not to be missed if you're a fan of heavy basslines and 808 samples. 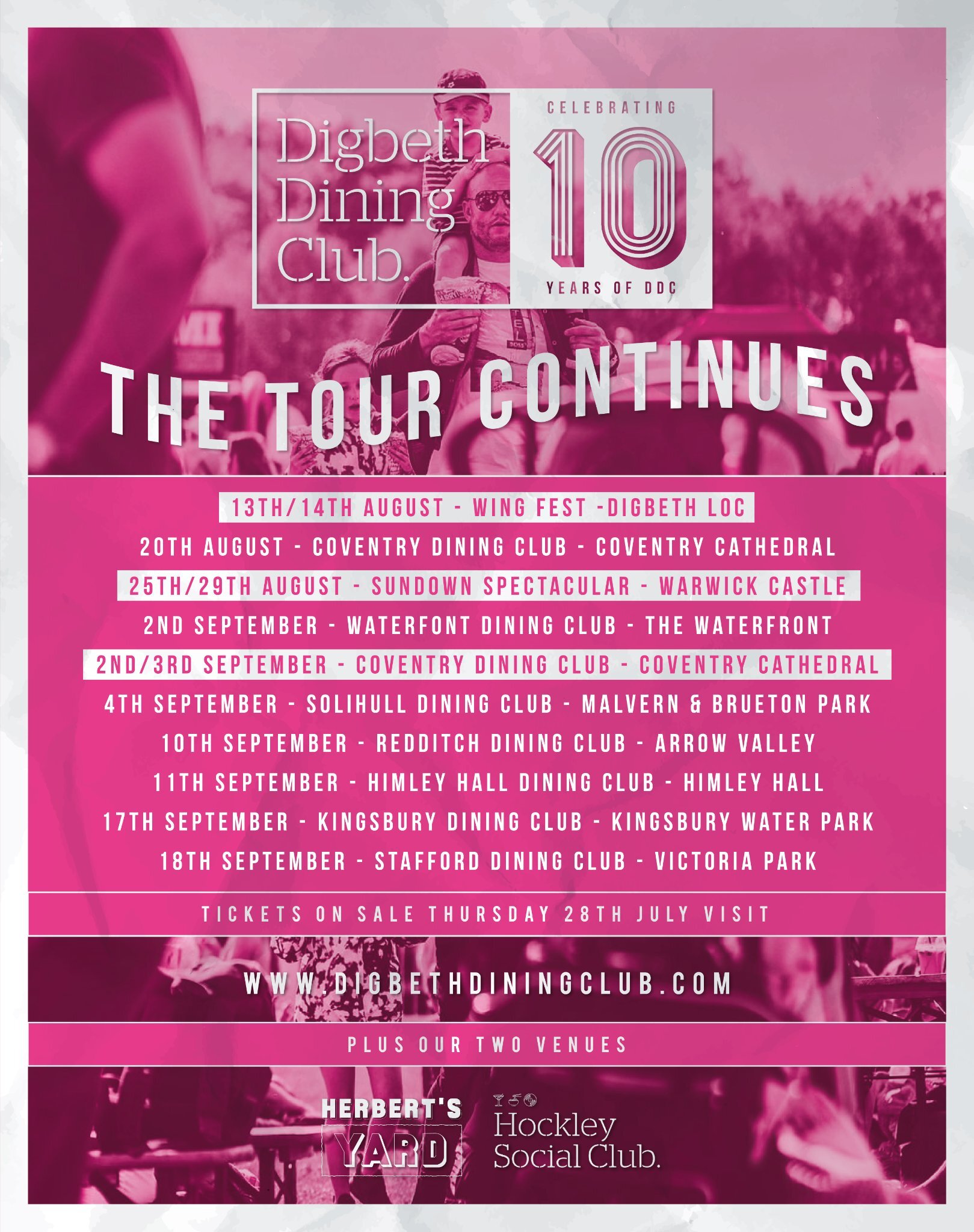 The team of street food connoisseurs behind multi-award-winning event brand, Digbeth Dining Club have announced a handful of new dates to extend their milestone, 10th-anniversary tour of the Midlands.

Now running until the end of September, the newly added dates will see a selection of restaurant-quality food vendors setting up shop and serving plates of tastebud tantalising food in Coventry, Solihull, Redditch, Himley, Kingsbury and Stafford. The travelling event, which has already popped up in 14 locations, covering basically the entire Midlands region, has welcomed and fed just shy of 100,000 foodies, with that number expected to double before the tour concludes.

A feast for the soul, be sure to grab your tickets for one of the stop-offs on the Digbeth Dining Club 10-year anniversary tour sooner rather than later or risk bitter disappointment. 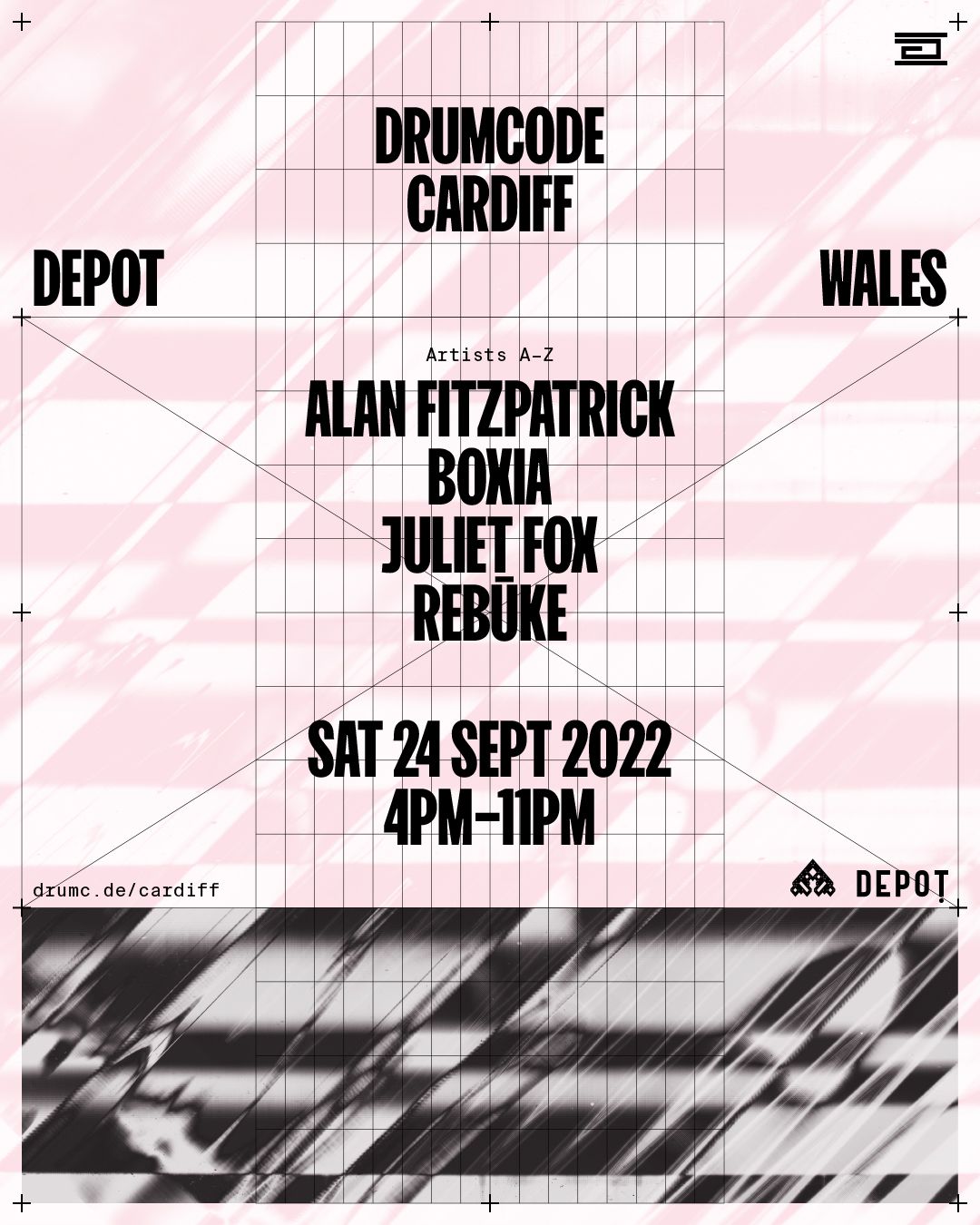 Where: Depot in Cardiff

People of Wales and the surrounding regions - this one is HUGE! The world's most-esteemed techno label, Adam Beyer's Drumcode has confirmed its attendance at Cardiff Castle this September!

In partnership with renowned event planners, Shangri-La, Drumcode will deliver an evening of high-tempo, fist-pumping dance anthems, courtesy of some of the scene's most in-demand icons, the likes of headliner, Alan Fitzpatrick.

Already said to be making the necessary preparations in anticipation of the 7-hour spectacle, Shangri-La will welcome up to 8,000 avid techno fans into the historic castle's keep, for the first of a series of Shangri-La events running over the winter in 2022.

The full calendar of events for The Warehouse Project's 2022 season, an annual highlight for club-goers in Manchester, has recently been unveiled, as most of you are already likely aware. And what a programme of parties we have to look forward to.

Bringing together devout ravers from all four corners of the home nations, this year's season is set to boast a number of world-class producers, musicians and mixmaster specialists from August right up until the first day of January 2023. Among those on the bill are the likes of Peggy Gou, curating her own Gou talk show, Michael Bibi, heading up a Solid Grooves takeover, and Annie Mac and Patrick Topping, who will headline this year's Halloween spooktacular.

Follow the link below to discover who else will be making an appearance over this year's greatly anticipated season.

Black Midi, the undefinable, abrasive and damn right outrageous London quartet, are set to make their long-awaited return to Liverpool this October, performing tracks from their raucous new full-length release, Hellfire, at one of the city's best-loved independent music venues - the Invisible Wind Factory.

The Mercury Prize-nominated group, celebrated for their outlandish live shows and mind-bending experimental back catalogue, are on a whirlwind run of dates at present. Scheduled to take to the stage in venues across the globe throughout August and September, fans can expect to see the band in Europe. with dates in Manchester, Birmingham, Athens and Stockholm, as well as out in the States, in Baltimore, Denver, Los Angeles, San Francisco and San Diego.

An unmissable night of entertainment for those who like their music loud and wild. 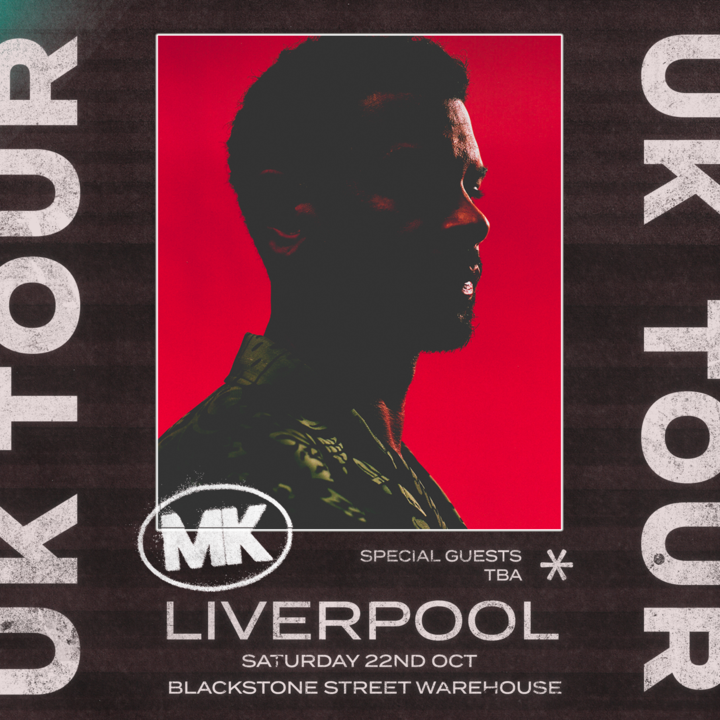 US Billboard chart-topper, Marc Kinchen AKA international house DJ/producer, MK, heads back to the historic 'city of pop' on Saturday 22nd October, commandeering the Blackstone Street Warehouse for 9 hours of wall-to-wall house music.

The Detroit-native, who grew up through the era which saw the clubs of his home city giving birth to techno, is hands down one of the most sought-after DJ acts on the face of the earth right now. With festival bookings across the world - at events such as Croatia's Hideout, Chicago's Lollapalooza and Creamfields here in the UK - the producer/selector has perfected his skill, bringing a mesmerising live show to all those lucky enough to witness an MK set.

It goes without saying that his return to Liverpool will be a monumental occasion. Get your tickets on the link below and join thousands of house music fans on Liverpool's North Docks this October.