Awakenings and LWE presenting Drumcode was sure to impress, boasting an incredible line-up featuring the likes of Swedish techno sensation Adam Beyer (who manages the Drumcode label), the multi-talented DJ, producer and singer Nina Kraviz and French electronic phenomenon Agoria to name but a few on the star studded set list.

The lengthy ten hour party kicked off at the very early time off 12pm, so as we approached the already long winding queue snaking out the venue, we mentally prepared ourselves for hours of heavy techno-infused revelry.

The sold-out event was taking place during the prime time Saturday slot on Halloween weekend, so wanting to join in with the festivities we were sure to don our best gruesome blood-stained outfits.

As we made our way into the Tobacco Docks warehouse venue in East London, we felt rather overwhelmed. Despite our early entrance, the expansive venue was already rammed with concoctions of brightly and gorily dressed groups swimming past us in huge flocks.

It was no doubt that the atmosphere and the venue was incredible and we couldn’t help feeling impressed, with the historic venue holding a variety of different rooms with enough space to accommodate up to a hefty 5,000 people.

After taking our time to explore and soak up our new, hedonistic-driven surroundings, it was definitely time to grab a drink and check out the music. With great luck we stumbled upon room two, fortunately heading straight into a vibrant set by British electronic artist Scuba (check out his Boiler Room appearance above), who tore the place down with his techno-house infused tunes to heaving swarms of fans.

There we stayed until the end of his set, entranced by the incredible luminous lighting and heavily impressed as the set came to an exhilarating close.

Heading downstairs, we decided to find electronica and techno producer Max Cooper in room three, which had a distinct underground vibe feel to it.

We bopped along, enjoying the dingy yet cool atmosphere of the basement room as he spun a mix of his own tunes along with the likes of The Prodigy's 'Poison' (below), an unexpected yet welcome surprise to the set. The set came to a euphoric end with his own hit ‘Adrift’, with hordes of ravers clearly pleased with his fantastic set.

Before we knew it, it was time for the last set of the evening in the Tobacco Docks warehouse, and techno legend Adam Beyer was welcomed to hit the decks in the sweaty room one, that by that point seemed to resemble an overcrowded sauna.

There he set the place alight spinning hits such as the likes of Budapest-based duo Steam Shape's 'Naff Places' (below). Despite the masses (who can blame them really?) and the heat, with the intensely exhilarating atmosphere and outstanding visuals, the set truly closed the night perfectly at the Tobacco Docks venue.

As we slowly trickled out of the venue with the crowds, it soon dawned on us that it was still ridiculously early on in the night, with it not even being 11pm yet.

Not ready to end our night of dancing and debauchery, we decided to head over to the sold out LWE and The Hydra present Drumcode after dark after party in the nearby Studio spaces E1.

There we flitted across the two-room warehouse venue, raving fervently to the awesome Max Cooper once again and underground producer Dustin Zahn. As always, exhaustion eventually caught up with us and we crept home in the early hours of the morning, knackered yet completely and utterly satisfied with our night.

Here are the next 2 upcoming events At Tobacco Dock, LONDON 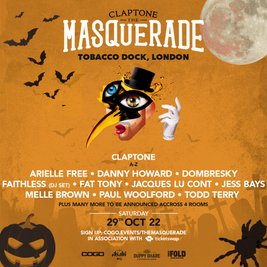 The man, the myth, the enigma with the golden mask, Claptone brings his esteemed party series The Ma... 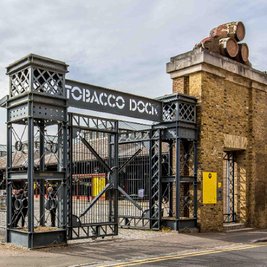 This Halloween FUSE emerges from the shadows to make our long-awaited return to London!