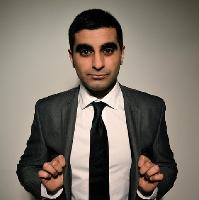 The Vincent Hotel in Southport

The Old Market in Brighton & Hove

“Blackburn-born Ilyas has a slickness more reminiscent of US comics, and the gags to back it up, though his most prized asset could yet be his bold, subversive streak”

Tez Ilyas started performing comedy in 2010 – hitting the ground running he found himself in no less than eight competition finals, including the prestigious BBC New Comedy Award and Leicester Mercury New Comedian of the Year. In 2013 he was selected onto the prestigious Pleasance Theatre showcase, The Comedy Reserve, for the Edinburgh Fringe Festival.

Tez ILYAS has been mentioned in our news coverage

Do you promote/manage Tez ILYAS? Login to our free Promotion Centre to update these details.