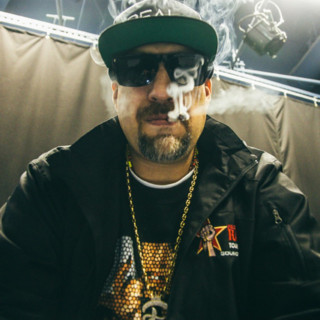 B-Real (born Louis Freese on June 2, 1970) is a Latin rapper of Cuban and Mexican heritage. He is best known for being the lead rapper in hip-hop group Cypress Hill, who made their debut with their self-titled album in 1991.

Born to a Mexican father and an Afro-Cuban mother, B-Real's moved with his sister and mother out of his father's home and moved to South Gate before ending up in South Central Los Angeles. Before dropping out of Bell High School, he befriended future Cypress Hill members Sen Dog and Mellow Man Ace (who forewent staying with the group to go solo). Sen Dog, who was affiliated with the Bloods gang set known as "Neighborhood Family" [South Swan Blood], would later introduce B-Real into the set.

B-Real became a drug dealer during his Blood affiliation. His lifestyle led to being shot in the lung by a .22 pistol in 1988. The shooting and subsequent hospitalization caused Sen Dog to rethink his priorities, leave the gang and take up a job as a department store security guard.

After being introduced to DJ Muggs by Julio G the KDAY mixmaster, B-Real and Sen gained interest in Muggs' concept of an album based on experiences from Cypress Ave. in South Gate. B-Real would use his life-threatening experiences as material for the group's self-titled debut album, and other albums.

B-Real has been mentioned in our news coverage

The Best Halloween Events to Attend in Bristol

Below is a sample playlists for B-Real taken from spotify.

Do you promote/manage B-Real? Login to our free Promotion Centre to update these details.