The Warehouse Project have confirmed the full calendar of shows for the 2019 season at their new home, the 10,000 capacity Depot (Mayfield).

The three month season commences September 20th running until January 1st. The newly announced events include WHP presents with MK, Gorgon City and Riva Starr on Friday 11th October, followed the next day by The Hacienda Must Be Built with Hacienda Classical, Soul II Soul and all the original residents.

Patrick Topping will unveil his Trick label concept in Manchester on Friday 8th November, with the likes of Luciano, KiNK, Eats Everything and Fjaak all on board.

Ape & Metropolis returns at the end of November with Andy C, Goldie and Sub Focus, with Feel My Bicep arriving at Depot the following weekend, bringing the likes of Jeff Mills, 808 State and Floating Points.

Underworld have been announced for a live show on Thursday 5th December, whilst Jamie Jones brings his Paradise party to the space the following day. Both the WHP NYE and WHP NYD shows are confirmed, but with line ups to follow later this year.

Tickets are on sale from 9am on Friday 19th July.

The Hacienda Must Be Built tickets - Saturday 12th October

Here is the next upcoming event At Depot (Mayfield), Manchester 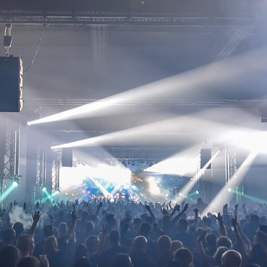 FAC51 - The Hacienda at Depot (Mayfield) on Saturday 13th November!