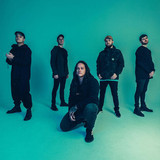 2019 is looking large for Australia's fastest rising heavy act. Still dusting off the jetlag after an arena-conquering European tour supporting UK metalcore kings Architects alongside Beartooth in January and February, Polaris now prepare to take the stage at Download Australia in Sydney and Melbourne for what promise to be some of their biggest Aussie shows yet.

This all comes off the back of an insane bucket-list year for the Sydney five-piece in 2018. Wasting no time in catapulting off the success of their November 2017-released debut LP The Mortal Coil (Resist Records/Sharptone Records) - which charted at #6 on the ARIA charts, scored an ARIA nomination for Best Hard Rock/Heavy Metal Album, and a Triple J Feature Album - the band supported Parkway Drive across Australia and the USA, returned to Europe with We Came As Romans and, much to their own disbelief, sold out THREE consecutive Australian headline tours of ever-growing scale within the space of eight months. In 2019 it's undeniable: Polaris have well and truly landed.

The rest of the year promises a European summer festival run, a bunch more exciting dates both at home and abroad yet to be announced, and the possibility of some much-anticipated new tunes.

Polaris has been mentioned in our news coverage

Fucked Up to perform debut album 'Hidden World' in Liverpool

Below is a sample playlists for Polaris taken from spotify.

Do you promote/manage Polaris? Login to our free Promotion Centre to update these details.