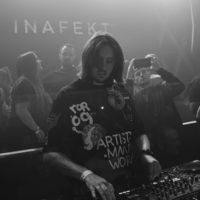 Inafekt is quickly climbing the ranks of house and techno to be recognised as one of the most exciting new artists on the scene. The Liverpool-based DJ & Producer has been stacking up the releases with ''What Is Techno'' and ''Mercy Me'' on Alan Fitzpatrick’s We Are The Brave Imprint, Also ''Groove Tool'' and ''Keep On Lovin’'' on Yousef's Circus Recordings. Inafekt’s rave-ready signature sound has gained support from the likes of Alan Fitzpatrick, Patrick Topping, Mark Broom, Yousef, Anja Schneider, Danny Howard, Eli Brown, Ben Hemsley, Josh Hvaal, Obskur & more!

He now prepares to release his most anticipated tracks as nightlife returns to normal. Smash hit ‘’Loleatta’s Revenge’’ forthcoming on Eli Brown’s Arcane had 5 consecutive BBC Radio One plays from Danny Howard, the most an unreleased track has ever seen on-air consecutively. Inafekt continues to impress and solidify his newly found position amongst already established DJs and producers, he will most definitely be one to watch leading into 2021 and beyond.

Inafekt has been mentioned in our news coverage

Here are the latest Inafekt mixes uploaded to Soundcloud.