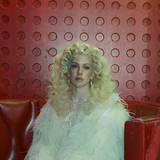 Ellie Goulding is a British female singer-songwriter. Born in Wales, she grew up in Kington, Herefordshire and currently lives in London. Touring since 2008 she released her debut single Under The Sheets on November 16th 2009. The track was produced by Starsmith, who she has been working with since the very beginning of her career. Her debut album will be released on the 1st of March 2010 and is named Lights.

Ellie Goulding has been mentioned in our news coverage

Below is a sample playlists for Ellie Goulding taken from spotify.

Do you promote/manage Ellie Goulding? Login to our free Promotion Centre to update these details.