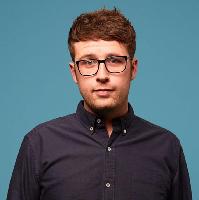 Rising star Chris Washington is taking the comedy industry and audiences alike by storm. With bags of northern charm, Chris is fresh from a hugely successful debut run at the 2017 Edinburgh Fringe Festival, during which he received a sparkling nomination for the coveted lastminute.com Edinburgh comedy award for Best Newcomer with his solo stand-up hour, ‘Dream Big (Within Reason)’. Tour support for Jason Manford, Tom State & Paul Sinha.

Chris Washington hasn't been mentioned in our news coverage

Below is a sample playlists for Chris Washington taken from spotify.

Do you promote/manage Chris Washington? Login to our free Promotion Centre to update these details.