We've lacked the will to peel ourselves away from social media today, captivated by all the wild scenes and world-class performances caught on film at some of the many events that have happened over the past few days. From the UK's largest electronic music gathering, Creamfields North to the renowned Manchester Pride, London's All Points East and the annual Reading and Leeds Festival, who saw last minute headliners, The 1975 and secret slot fillers, Pendulum stepping up to amaze audiences - we've been seriously spoilt for choice!

Sadly, the summer is inevitably coming to its end and the next bank holiday we have to look forward to is Christmas Day (Only 117 days to go...). But that doesn't mean there isn't thousands of parties still to experience over the coming weeks and months.

Freshers parties, one-off raves, full autumn and winter listings courtesy of some of the worlds biggest dance brands, Manchester's The Warehouse Project for instance, and even a few 2023 festival offerings to mark in your calendars - there's a surplus of places to dance and take in the best live music around in the not too distant future. Continue below to for tickets and more... 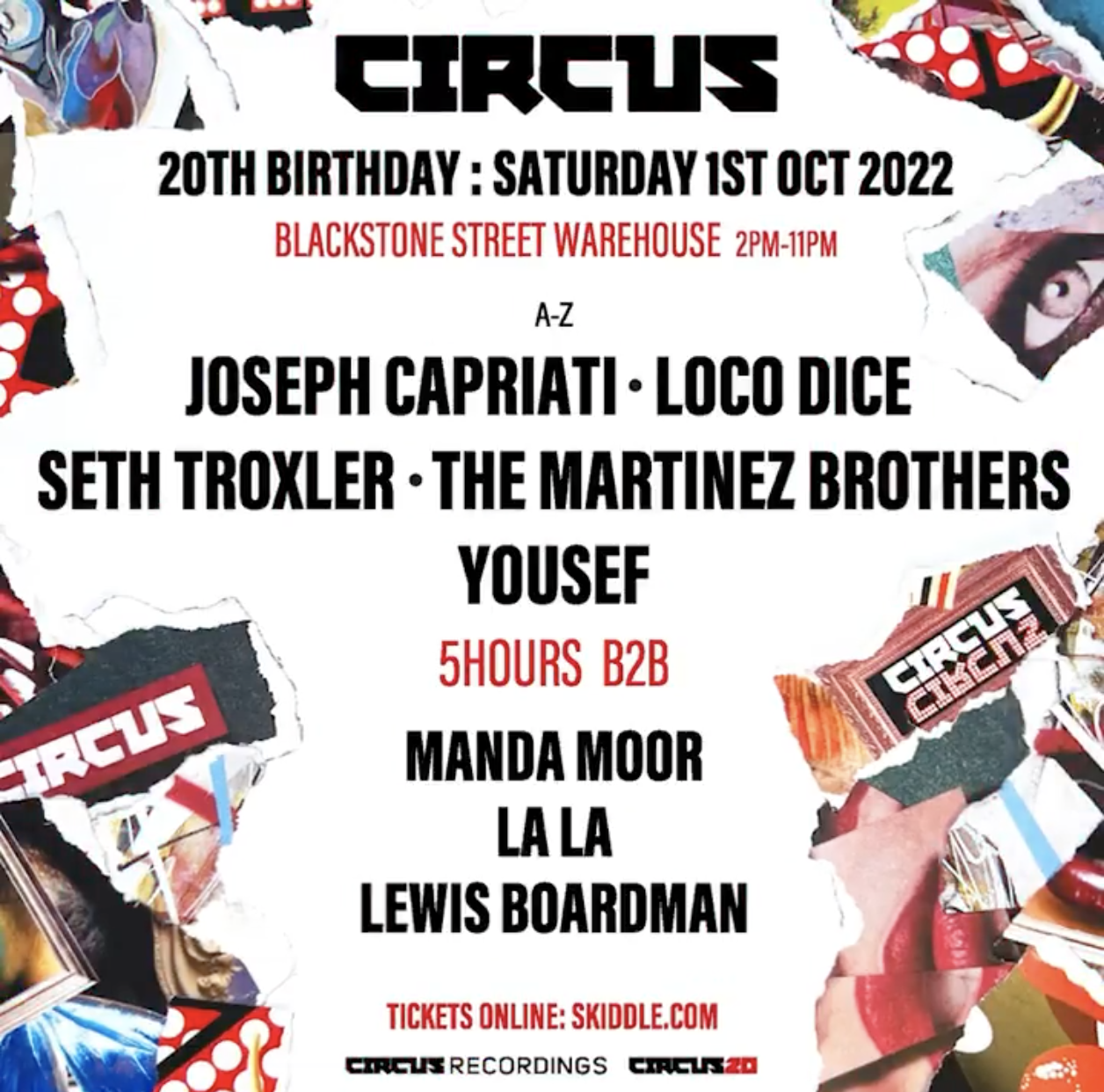 Liverpool's CIRCUS will commemorate a very special milestone in their history on Saturday 1st October, throwing an epic party in celebration of their 20th year in the business at the Blackstone Street Warehouse.

A renowned clubbing brand among Northern dance addicts, CIRCUS has been monumental in bringing internationally acclaimed talents to the famous port city over the past two decades. Talents the likes of Carl Cox, Groove Armada, Hot Since 82, Marco Corola, Eric Prydz and Sonny Fodera, to mention just a few.

Assisting in marking a very special occasion for the brand, CIRUS head honcho and native Liverpudlian, Yousef has enlisted the help of a handful of respected DJs and producers. Joseph Capriati, Loco Dice, Seth Troxler and The Martinez Brothers will each take turns warming the crowds. Check the event flyer above for more. 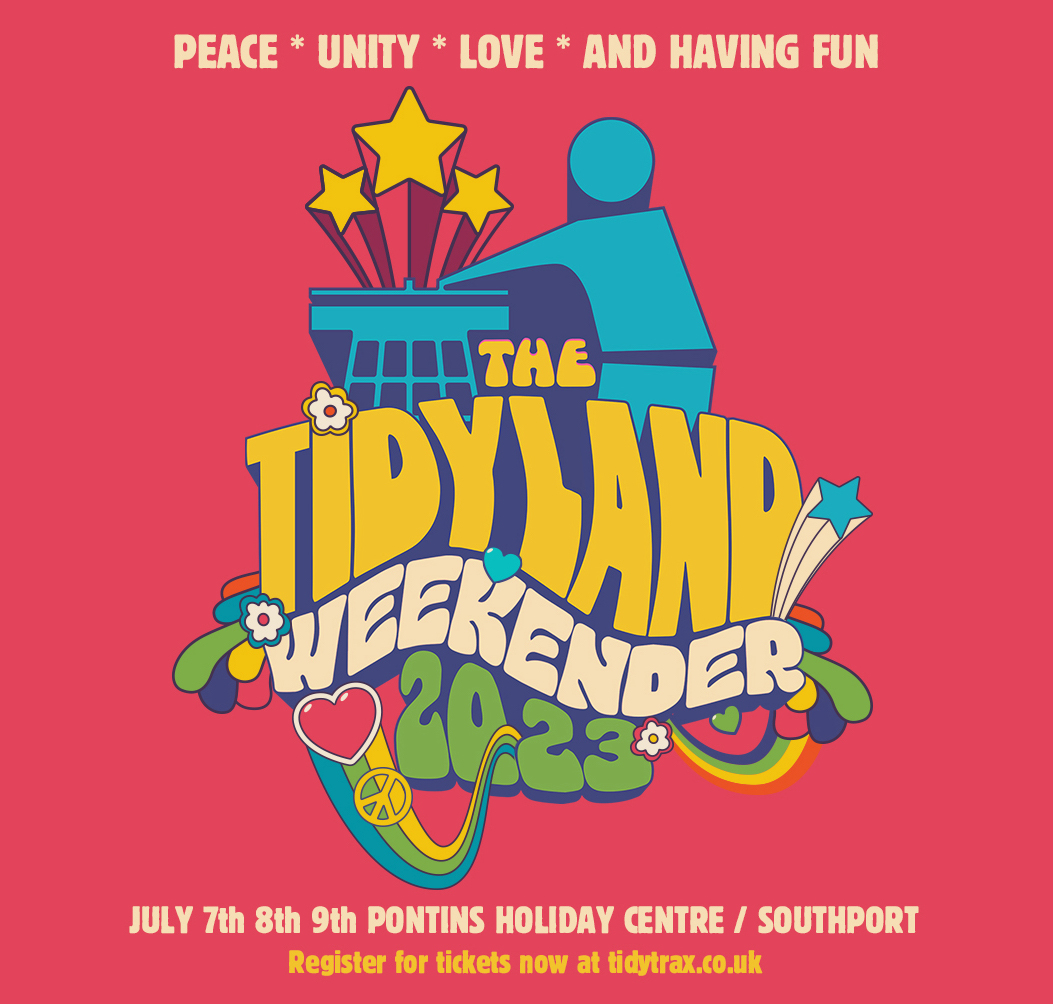 Almost two months on from the rescheduled 2022 edition of the Tidyland Weekender, celebrating the remarkable 25th anniversary of the revered Tidy Trax label, and the team behind the much-loved music brand are back with details for next summer's instalment.

Following three years without a Weekender event and two Covid-related postponements, this July's soiree was hailed as their biggest ever. However, not quite in agreeance with this statement, the organisers felt they could go one bigger. Recently declaring the date for 2023's Tidyland experience, the Tidyalnd team have already begun making preparations for a festival to blow all others out of the water.

Taking place at a brand new venue, Pontins Holiday Centre in Southport, the 72-hour party is again set to bring some of the biggest names in hard house to the shores of Northern Enlgand. Tickets are fully expected to sell out, watch this space for more details. 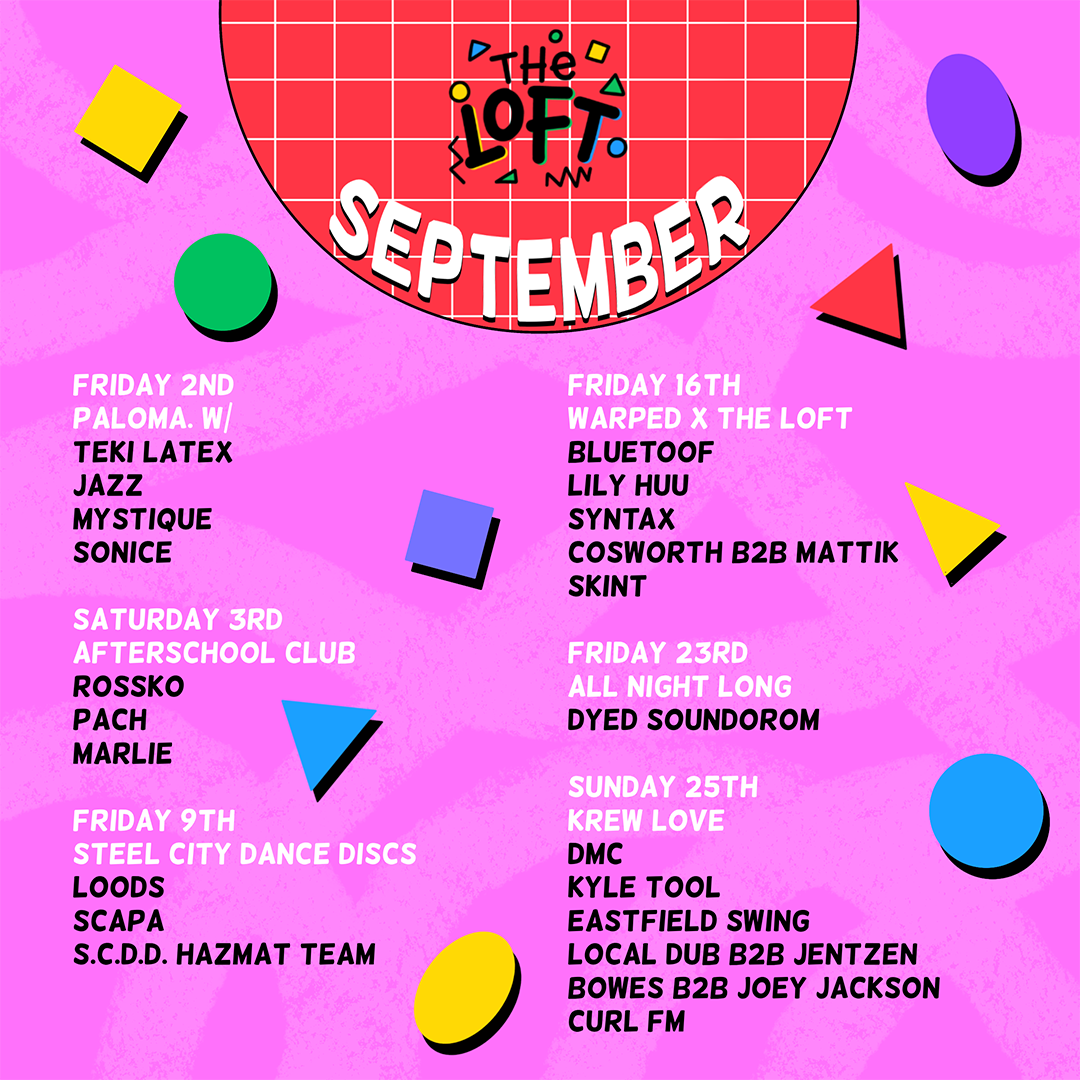 When: Numerous dates throughout September

Where: The Loft MCR in Manchester

Intimate clubbing hotspot, Manchester's The Loft has issued its full listings for the current month, with some notable names scheduled to appear and take charge of the venue's sound system.

Six events have recently been announced by the team behind dance brand, Animal Crossing, with selectors the likes of Dyed Soundorom, Bluetoof, Teki Latex and Rossko all confirmed to perform. An array of upcoming party brands will also commandeer The Loft throughout September including PALOMA. and the Warped gang, who will deliver some of the UK's finest talents in the worlds of garage, bass, breaks and jungle.

Follow the link below to find all six dates, tickets and more... 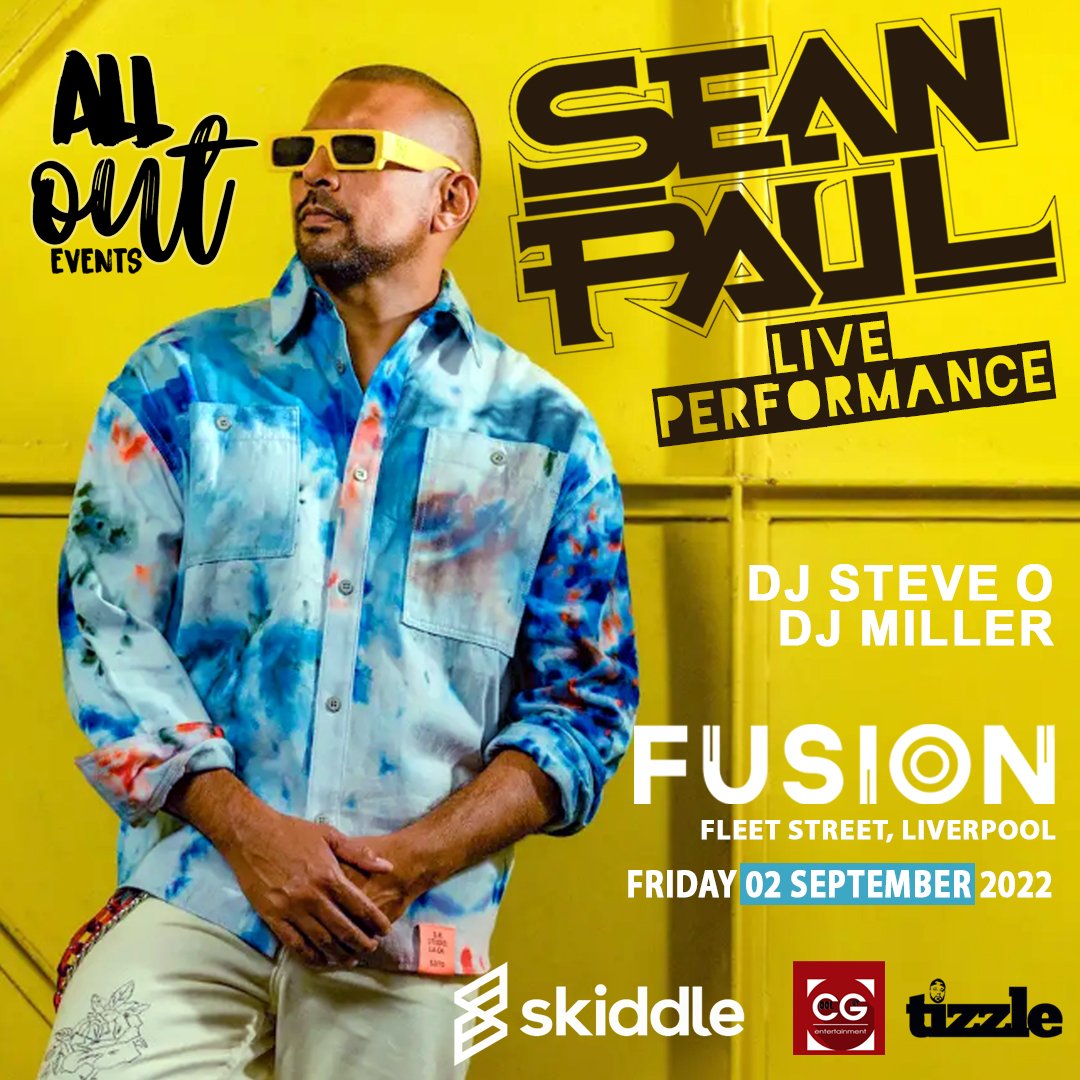 Where: Fusion in Liverpool

Jamiacan-born Grammy-Award-winner, Sean Paul brings his unparalleled dancehall-inspired sound and lyrical genius is imminently set to touch down in the UK ahead of his performance at Liverpool club, Fusion this weekend.

The world-famous rap star, former lead vocalist of the Dutty Cup Crew, gained widespread acclaim following the release of his debut album, Stage One, back in 2000, but it wasn't until he issued Dirty Rock in 2002 that he achieved superstar status. Smash hits, 'Gimme The Light', 'Like Glue', 'Get Busy' and 'Baby Boy', featuring Queen of Pop, Beyonce, set the course for the now 49-year-old platinum selling artist, who's still as prolific as he's ever been.

Catch the much-celebrated Jamiacan native doing what he does best on stage, in the Northern coastal metropolis On Friday 2nd September. 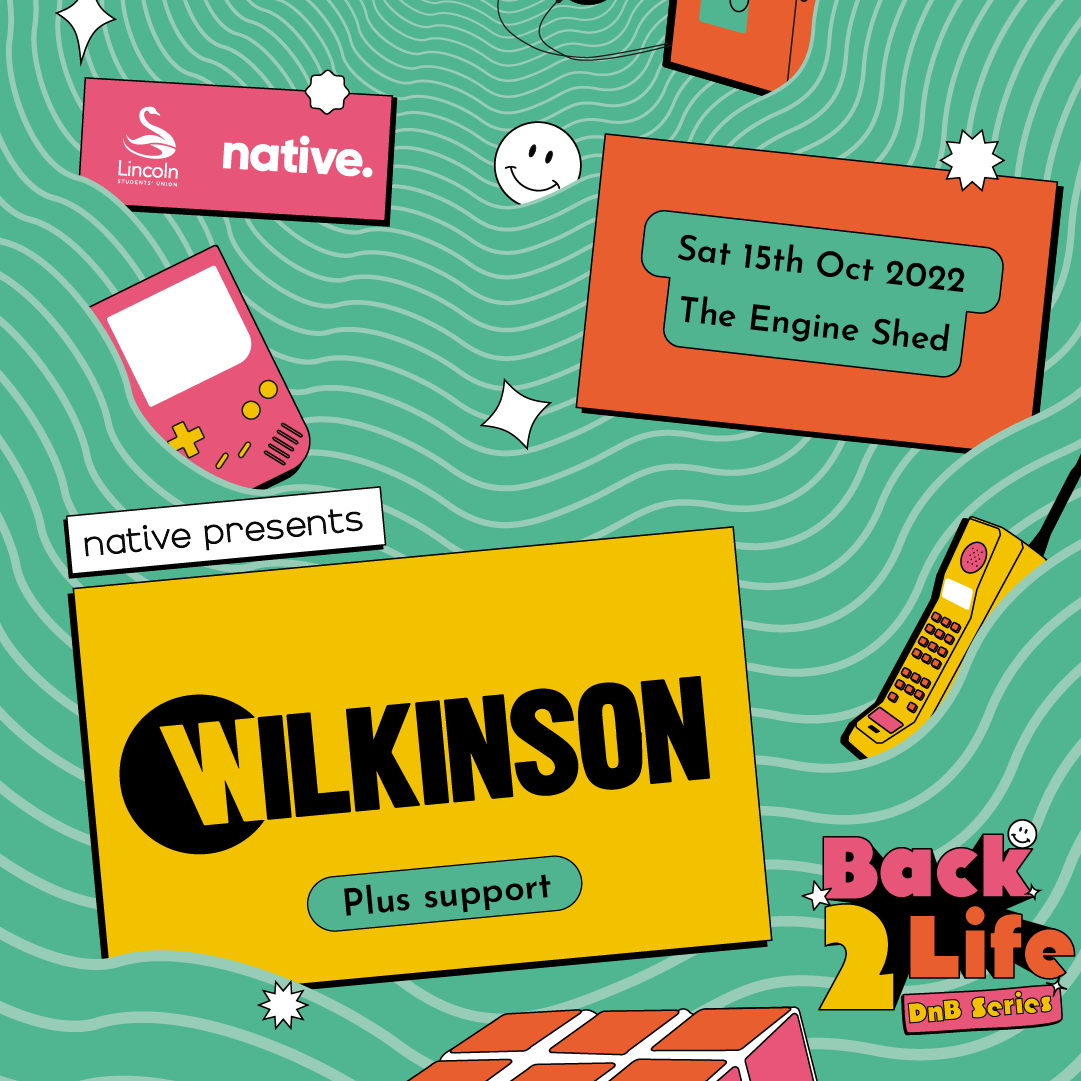 Where: The Engine Shed in Lincoln

Lincoln-based electronic music radio brand, Native has teamed up with Lincoln Student Union to bring one of the heavyweight names of UK drum n bass, Wilkinson to the counties biggest and best live music venue, The Engine Shed, this October.

Following the success of the last collaborative party, which saw D'n'B pioneer, Shy FX stress testing the foundations of the venue back in April, the event will assist in prolonging the forthcoming weeks of Freshers parties, set to kick-off in towns and cities around Britian in the coming weeks.

Wilkinson, who will arrive off the back of a packed out summer schedule, playing at events such as Let it Roll and Louder at Super club Eden in Ibiza, is set to bring his infamous DJ set to the inhabitants of the city. 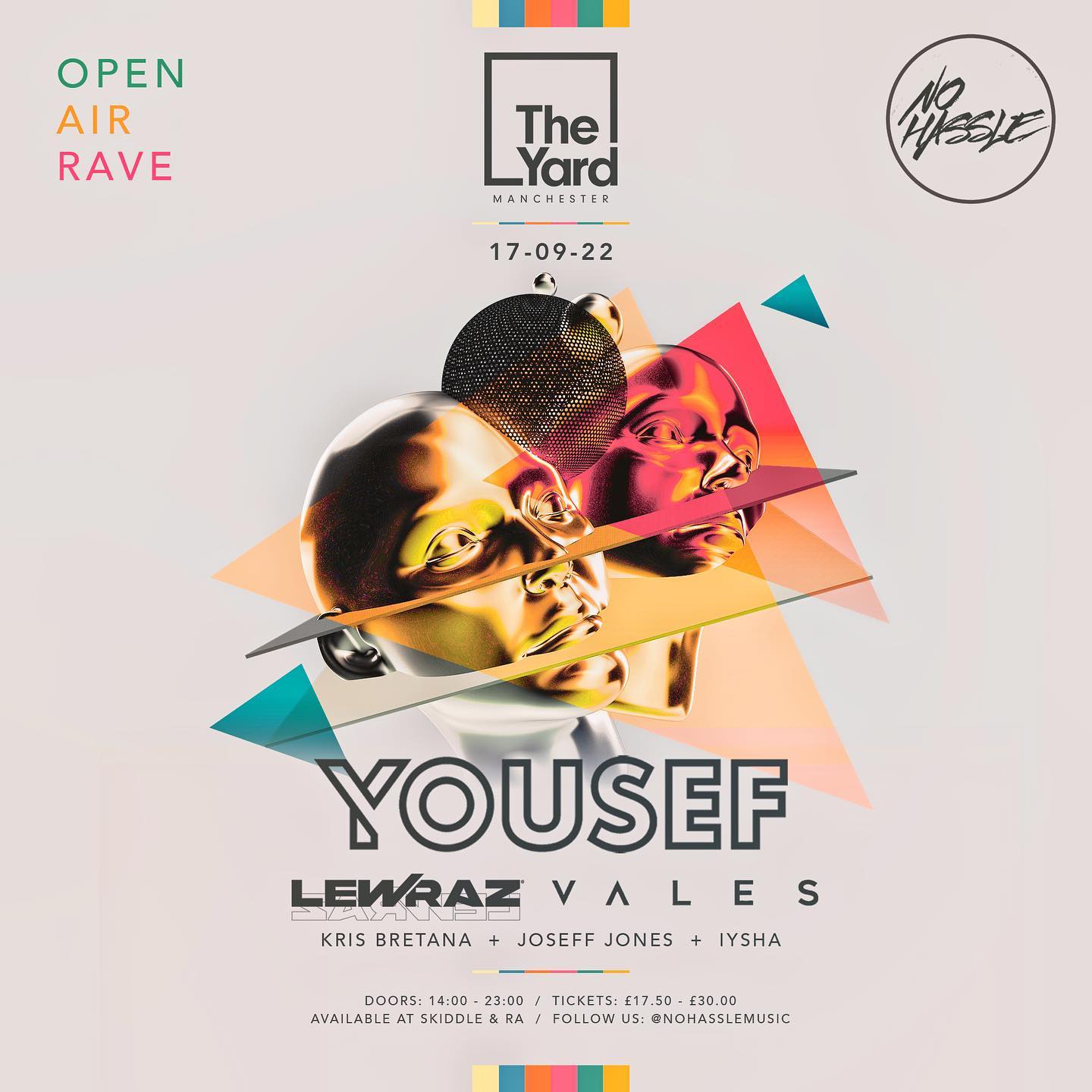 Manchester party-starters, No Hassle take over The Yard, the city's newest live music space, in little over two weeks time for a day time rave teeming with live performances from the best names in UK house and techno.

Among the headline acts confirmed to break in what's surely set to become one of the most frequented clubbing destinations in the Northen capital, are the likes of Yousef, the boss man of Liverpool dance label and event brand, CIRCUS, fast-rising Mancunian duo, LewRaz, Vales, Joseff Jones, Kris Bretana, and Iysha.

First release tickets have now all but sold out. Don't miss your chance to see a handful of upcoming and established dance talents live in a brand new setting next month.

On sale later this week... 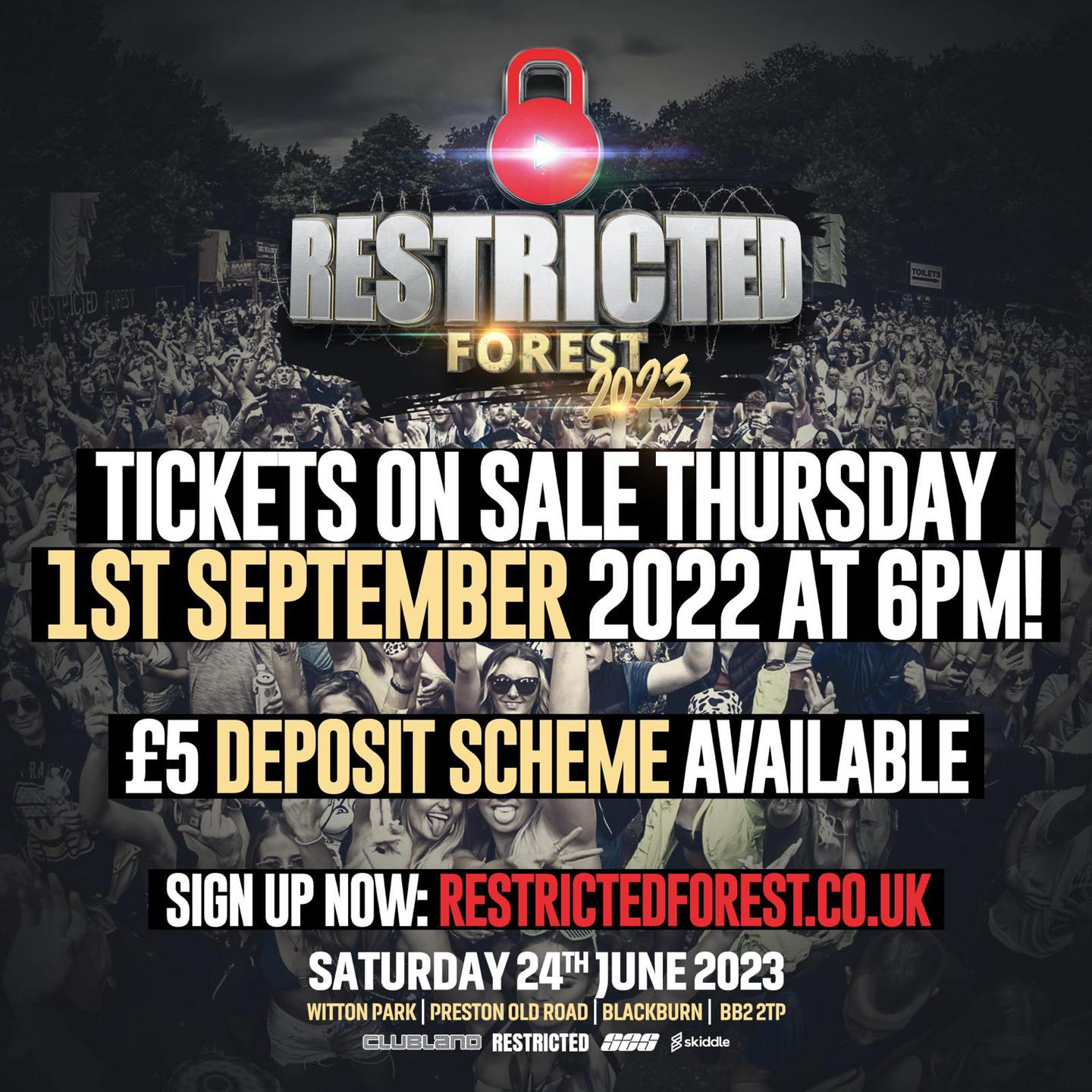 Where: Witton Park Blackburn in Blackburn

The team of organisers behind two of Lancashire's most highly sought-after music events, Restricted Forest and Restricted Rocks, have lately announced the return of both festivals in the spring and summer of 2023.

Restricted Rocks, scheduled to run over Sunday 30th April next year, will once again welcome a number of the UK's finest tribute acts to perform in front of thousands, whilst Restricted Forest transforms Blackburn's Witton Country Park into a wonderland for avid fans of house, techno, old skool and more on Satiurday 24th June.

This year's edition of the latter mentioned dance festival saw a jam-packed bill of world-renownewd talents taking to the events various stages. Whipping crowds into a frenzy, those who were present experienced mastered sets from Sash, Dave Pearce, Micky Modelle, N-Trance, Snap, Basshunter, Living Joy and more. Keep your eyes peeled for further details on next years lineup, coming soon...

Tickets for both events will be available for puyrchase this Thursday. Head to the links below now and sign up for reminders.

Where: The Depot (Mayfield) in Manchester

Joining several other parties, already announced to run over the autumn and winter at the colossal warehouse venue, the Depot (Mayfield), two of the latest additions will see the likes of Camelphat moving the crowds whilst London-based record label and event brand, Eat Your Own Ears invites some of its friends and roster acts to perform over a special day-long takeover. Stay glued to Skiddle's social media pages and the Skiddle blog for more details over the coming days.

Tickets for both events mentioned above will be available for purchase this Friday. Click or tap on the links below to sign up for reminders.

Find tickets for WHP 22 - Eat Your Own Ears - here

Days out with Skiddle: The best experiences and attractions in the UK | Skiddle