Coronavirus update: View cancelled events here
» News and Features » Its house classics all the way! Or is it old skool?

Its house classics all the way! Or is it old skool?

We take a look at why Manchester is synonimous with the classic sounds of house music and explain why there's a big difference between classics and old skool events.

It's no secret Manchester has a long musical history. Not only was the city at the forefront of the industrial age, international commerce and technology, the age of clubbing and house music owes a lot to the unique city of Manchester.

Talk about house music and we go from New York to Chicago and over the pond to Ibiza, London and yes...Manchester. The remnants of the industrial age litter the city with an abundance of warehouses and store houses, the perfect setting for what became know as house music.

Of course today, thats not the case but back then; the industrial looking mecca that was the Hacienda played a huge role in giving birth to the world of house music and clubbing we know today. And over the last 20-30 years, the scene and city itself has produced icon after icon in the form of famous DJ's, producers, venues and club brands.

Fast forward to today and there's a sense of nostalgia in the air. With house being just about the only thing in any young clubbers life (along with tattoos, sunglasses and 90s fashions of course), the more mature clubbers are constantly reminded of how influential house music is today....And they crave some more! At the very same time, those youngsters in the know are very keen to hear and experience where house music came from rather than accept it as merely something new. This is creating a simmering, melting pot of trends, ages and taste among many a dancefloor with one united passion.....house music in all it's glory!

Which leads me on to my hot pick for December. Its fairly obvious most people are going to stick with the main haunts this Winter. A certain warehouse with a certain project being the main one. But, I prefer the more collective, forward approach rather than others more cool, laid back approach. Something that pays homage not to one particular style or sound, but an event that combines all styles and era's of the golden age of house. And for me, a good old fashioned old skool event is what delivers and something thats very unique to Manchester simply because Mancs know how to party! This is why I shall be attending Feel The Beat this Boxing Day at Mint Lounge, Manchester; which celebrates its 10th anniversary this month.

So, whats the difference in a classics event and an old skool event? On paper, not much. Inside the club, its a whole different experience. With a no holds barred, gusto approach to dishing out the house anthems, an old skool event in Manchester has always been a firm favourite of mine. Not only do we get that familiar house beat, we get over the top vocals, piano driven melodies coupled with heavy breaks, basslines, whistles and hands in the air as Manchesters underground legends educate and elivate the crowds in the wide world of electronic dance music as a whole.

And Feel The Beat have covered all angles. From Retro's very own Paul Taylor who's currently celebrating 25 years of the brand leading the way in house classics events headlining alongside Manchester's award winning underground legend that is Stu Allan. Still a firm favourite in the old skool scene, everybody thats anybody from the golden age of house knows this guy. He can still be heard on Manchesters airwaves every Friday night on Unity Radio at 9pm-11pm.

We're also treated to some legendary rave producers from back in the day in the form of Mix Factory's Mark XTC (Unity Radio) alongside DJ Ian Bland from 90's rave group Dream Frequency and Dancing Divaz, responsible for some of the biggest tracks and remixes of the 90's.

Couple that with long time veterans Rob Tissera, DJ Absolute and Manchester's trio of DJ's Butty & Recca and Grimmy who have been continuosly supporting the big names in Manchester since 2002, you know you're in for an authentic, audible treat of classics, memories and good times.


Tickets are no longer available for this event

Here are the next 3 upcoming events At Mint Lounge, Manchester 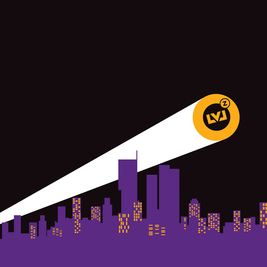 We're celebrating the end of Lockdown with the only way we know how.... a massive LEVELZ party 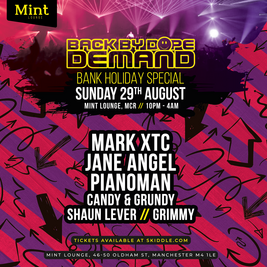