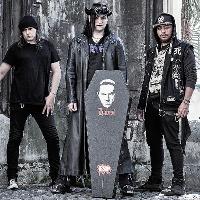 Vámpírok, meaning “Vampires” in Hungarian, or ” Vampire Rock” in English, are a London based Rock band formed of members from B-Movie Vampires & Diva Suicide.

Fresh from the crypt, formed in 2015, Vámpírok bring you a nightmare of twisted catchy pop-punk and heavy rock songs. It’s horror galore with over the top lyrics and stage show to match, making every day feel like Halloween!

Their music is best described as a low budget b-movie horror film in musical form. Expect a coffin full of horror humour and frightening fun straight from the graveyard!

Vámpírok hasn't been mentioned in our news coverage

Do you promote/manage Vámpírok? Login to our free Promotion Centre to update these details.